Several years ago we had a chain of department stores here in Canada called Woodward's. They were very exclusive, much like Harrod's in London, complete with a gourmet food department. My first job when I was in high school was at Woodward's, and customer service was drilled into me. The chain of stores was owned by Charlie Woodward, and he always referred to himself as a merchant. He said he was in the business of selling merchandise. If anyone need anything -- from groceries to private school uniforms -- they shopped at Woodward's. Folks could find anything at Woodward's and the service was wonderful. In 1986 the chain of Woodward's was bought by the Hudson's Bay Company, and most of the stores, excluding the flagship store, were torn down. 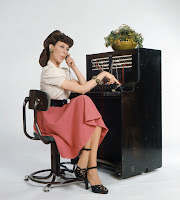 Yesterday I decided I needed some new pillows, but not just any pillows, I wanted Tempurpedic pillows, so I made some phone calls to see where I could find them. Big mistake. Do you think I could get a live person on the phone at any business in Vancouver? Just guess. Nope -- just voice mail. I called The Bay ... one ringy dingy ... two ringy dingies ... 24 ringy dingies later, no one answered. I called back and again the phone rang 30 times. There wasn't even a voice tree.

Finally I decided to go to Sears, after logging onto their website and choosing the pillows I wanted. When I got there, the store was so empty, you could shoot a cannon down the main corridor. I traipsed up to the third floor, and not a soul was in sight. After trudging around the cavernous linen department, I found the pillows I wanted. Were they on sale? I couldn't tell, and there was no one to ask. I glanced up and saw surveillance cameras with a sign "shoplifters will be prosecuted". As if I am going to walk out with two large Tempurpedic pillows and perhaps a new duvet cover, especially with Big Brother watching me. There were no sales clerks to help me, just lots of cameras ... watching...  Rather than making me feel like a valued customer, the store managed to make me feel creepy.

Did I end up getting the pillows? Yes, I went to Ed's Linens where there were three lovely sales clerks ready to answer all of my questions about what was the right product for me. They even threw in some free bath lotion.

Charlie Woodward was right. If a person is in the business of selling merchandise, they had better at least make an attempt at selling the merchandise.
Posted by Jo at 7:41 AM

You're so right. I find that if I DON'T want help I get accosted at every turn (I'm always polite, but in one store I had FIVE different sales associates ask if I needed help - I was laughing by the end), but if I DO want help everyone has disappeared. I wonder if they have some sort of customer service dissatisfaction radar?

I do not visit huge big box stores any more. About a decade ago I went to Shillito's and had to wait in line for a purchase to be rang up while the clerk was continually answering the phone. It made me so mad, I do all my shopping online unless it is something I can get at a locally owned store.

You're right - good customer service is very hard to find. I was in a store last night that has checkout counters at all 3 of their exits, but only one was manned. I know they're trying to save money, but you have to wonder how many sales they lose.

Haha oh my! THat sounds like quite the adventure, just for some pillows :)

Oh my goodness, I remember Woodwards and was SO sad when they were sold out. It was such a treat when my mother would take me downtown, park in the above-ground parkade and walk across the "bridge" to get into the store. Did you ever have their toasted shrimp sandwiches (on cheese bread) at their restaurant? To die for! Ah....memories.

Oh! And that's where Santa Claus came every year, too! :D

I couldn't agree more. Macy's is the same way - you can never find anyone to help you. Nordstroms is better.

Unfortunately your story is too common today. I like to shop smaller stores nowadays because of the availabilty of sales people who actually know about the products they are selling. Another pet peeve, if I may add one - have you ever tried to find a phone number for a company online? It is real obvious the last thing the business wants is to hear from you via the old-fashioned voice phone.

Department stores seemed like such a grand idea at one time - everything you needed in one store. But now, even if you do find saleshelp, they probably don't know anything about that 'department' or the product. I much prefer smaller stores that specialize, even if it is more expensive.

I worked for Henry Birks and Sons for 13 years. It was my first job and it was drilled into me about customer service. I relate to what you are saying and it's sad that as the stores get bigger the service gets smaller.

Calgary is bad but Montreal is better. Even just walking into a basic shoe store like Aldo I was treated with respect and attention as if I was the most important person of the day. It was that way with every store I walked into.

Sears is the same everywhere...it's the same way here too!

the new philosophy is: pay then get OUT!

I haven't been to Sears in ages. I was so upset to find that they bought Lands' End that I didn't buy anything from them for a long time, either. No sure what is going on with Sears, but they don't inspire me to buy anything, ever...

I worked in retail for many years, from clerk to management. When ever my superior would ask how I was able to increase the revenue and still maintain payroll I simply told him that the customer just wanted to be given service. It really is that simple.

I remember Grocery shopping in Woodward in New West and always getting my Santa Picture in the big corner window at 6th & 6th. When those stores died out, so did Customer Service.

I call it Customer Disservice.

Those lovely old department stores are all just sweet memories now Jo. When I was a kid one of my happiest memories was going to a wonderful store in Croydon called Kennards. I have a book on this long gone shop: The Store that Entertained is the subtitle.
Such a nostalgic read: a long arcade down one side of the store where little kiosks and pet shops delighted everyone. Also the pony rides were a huge treat for all the children visiting with their parents.
There was a special aroma too. Coffee roasting in one part; sweets and candyfloss in another; leathery smell of the sofas and armchairs (and the shoe repairers stall).
And then there was the beautiful café and restaraunt! So well run with 'Nippy' style waitresses (similar to the old Lyons Corner House staff). Sheer delight to have tea and a cake or two when we could afford it. Oh so many evocative images in my mind right now.
This fabulous store with its jungle of wires whizzing the cash payments to the cash office returning with the receipt was sold to a chain called Debenhams some 40 or more years ago.
Nowhere near the same style, atmosphere or service.
Hap-Hap-Happy Days!

I go where the customer service is good. A couple of weeks ago we had a new furnace installed. They've been back out three times trying to figure out why, every few days, the furnace goes on in the morning and pays no attention to the thermostat saying "warm enough".

I'll stick with these guys. They come out.

I remember that Woodwards store Jo and yes it was the center of the town at one time. Remember their $1.49 Day? I still remember the jingle that came over the radio to advertise that. And how with my girlfriends we'd go after school to browse around the makeup and lipstick departments where there were eagle-eyed salesgirls watching our every move. Guess they thought teenagers were all going to shoplift! And it was a shame when they closed down, although I didn't live there in the town any more.