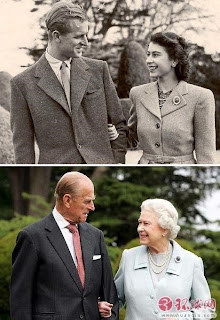 With the royal wedding less than two weeks away, the Vegas bookmakers' odds against the couple reaching their tenth wedding anniversary is 8 to 1. Well, with the track record of royal marriages in the past few years, I'm not surprised. William has said that he wants the marriage "to last forever". Well, I hope so. I do think William and Catherine are genuinely in love with each other, and with any luck, the world will leave them alone. Queen Elizabeth and Prince Philip have been married for 63 years, and they're still going strong.  I find that amazing.  I would imagine Philip has been quite ... challenging, to say the least, but the Queen is indomitable, and their marriage has endured.  Here are 25 things about them I find rather interesting:

1. The Queen’s former private secretary said of Prince Philip: “He is the only man in the world who treats the Queen as a human being.”

4. The Queen Mother used to refer to Philip as The Hun, as he is a member of the German house of Schleswig-Holstein-Sonderburg-Glucksburg.

5.When the pair honeymooned at Broadlands, the Mountbatten’s country home near Romsey, Hants, the bride had 15 suitcases, the groom two.

6. Under pressure from his wife-to-be, Philip gave up smoking on the morning of his wedding.

7.When Philip’s cousin Patricia Mountbatten remarked on Elizabeth’s flawless complexion, the Prince joked: “Yes, and she’s like that all over.”

8. In traditional upper-class fashion Elizabeth and Philip had connecting bedrooms. When he walked into Philip’s bedroom one morning, royal valet James MacDonald was embarrassed to find Elizabeth in a silk nightgown and Philip naked. “Prince Philip didn’t care at all,” said MacDonald. “Pyjamas? Never wear the things,” Philip said.

9. When they first moved into Buckingham Palace, Philip had a direct phone line installed so that he could talk to his wife without going through the switchboard.

10. Once, when the Queen repeatedly sucked in her breath at his fast driving, Philip told her: “If you do that once more I shall put you out of the car.”

11. Both the Queen and Prince Philip dislike duvets and prefer sheets and blankets.

12. On the day of Queen Elizabeth and Prince Philip’s wedding, a footman lost the bride’s bouquet and her tiara snapped in half as it was put on.

13. In the year of their wedding, the Queen and Philip attended a fancy-dress ball. She was dressed as a maid, he as a waiter.

14. Philip has nothing to do with his wife’s life as sovereign but does deal with family problems, of which there have been many.

15. The Queen still carries in her handbag a silver make-up case given to her by Philip as a wedding gift.

16. All the Queen’s major decisions – paying tax, giving up the royal yacht, urging Charles and Diana to have an early divorce – were taken after consulting Philip.

17. At the Coronation in 1953, Philip was the first layman to pay homage to the Queen. He knelt at her feet and kissed her left cheek.

18. After the death of King George VI in February, 1952, the royal couple did not want to move into Buckingham Palace but Prime Minister Winston Churchill insisted.

19. The Queen and Philip still have blazing rows. One courtier said: “You can hardly believe what you are seeing. There are cries of ‘Rubbish’ and ‘You don’t know what you’re talking about.’”

20. When arguing with her husband, the Queen’s technique is to talk in riddles to confuse Philip’s logical mind.

21. Philip could never have a bath with his wife because a maid is always in attendance.

22. The Queen loves to do impersonations and does a very good one of Philip.

23. Although they still sleep in the same bed most of the time, they stay in separate rooms if one of them has to get up early.

24. The Queen finds video recorders complicated so Philip is in charge of taping her favourite programmes.

25. They eat breakfast together with cereals on the table in plastic Tupperware containers.

With thanks to the royal expert James Whitaker.
Posted by Jo at 7:51 AM

He was a perfectly gorgeous specimen of a man, when he was young. No wonder she fell madly in love with him! [Ahem, he's still mighty well preserved, as we say.]

Was it a mutual love, at first? I have always kind of doubted it. But with time, I'm also quite sure that the love has become mutual.

So wonderful, that he is the only person who treats her as a human being. A queen must NEED that. Victoria did from Albert, did she not?

Wonderful set of facts. Sorry to have added a note of gossip, I suppose, with my wonderings. But am I the only person, to have wondered thus? About their beginnings?

What a lovely marriage. I like that they argue & that they have cereal for breakfast. My dad & his wife eat cereal together every morning too :)

So very interesting! I didn't know any of those fascinating bits. Thanks

Fascinating facts, as are they! Bring all your royal trivia to the wedding, please, and we'll have a great gossip fest. :D

I thought he cheated on her. SMILE

I use to think they were the last of the Great Royal Marriages, but hopefully Wills & Kate will be able to follow in there footsteps.

Room for one more?

26. Up until its most recent airing, afterwhich Phillygumbo misstakenly referred to his wife as "Fred," (<--TWICE!), Philip and Queen Elizabeth enjoyed watching their sketch performances together on Saturday Night Live. (<--cLiCkY-cLiCkY!)

Hi Jo, this is a lovely post and I especially like the two photos you They tell the story in their own right.

I love the two photos, they've hardly changed at all! What a great post Jo. Thanks for all the info.

Charlene says 'he cheated on her'. What, just the once Charlene? lol
Philip is a 'ladies man' - I have it on good authority.
He is, after all, a royal.
(Leery :-} )
My next comment may emanate from the dungeons of the Tower... hmmm.

Wow. The Prince was rightly handsome.

What a great marriage! I also especially loved #20, I've got to try that one myself. :-)

I mean wow! Boggled my mind with so many intimate but sweet details of theirs. Oh and I adore the same expressions on their face in those snaps of long ago and now. Thats really something.
Came after so long here JO..missed you :(

The other line I especially like is the one about how they eat their breakfast cereal out of plastic Tupperware containers. That's great!

Fun post! Lots of good lines and information on this most fascinating couple.

Only one person treats her as a human being. How awful!