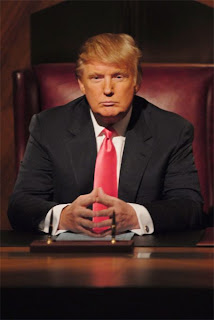 American politics fascinate me; there is always something weird and wonderful going on in the world of American politics.  Who would ever have guessed that The Donald would one day run for President of the United States?  Could it be that the man with the impossible spray-on tan and even more impossible hair could actually be a legitimate candidate?  Some folks are even taking his candidacy seriously.  Well, why not...  Could the Americans do any worse?  I have always believed that governments are a business and should be run by businessman, not politicians.  Americans are now paying between $3.50 and $4.00 for a gallon of gas.  That's insane.  And most of their oil and gas comes from Canada -- not the Middle East, so there's no excuse for that.  Maybe it's time for a businessman to run America like a business.

I'm not a big fan of Donald Trump, ever since he bought the wonderful sand dunes in Balmedie, Scotland, and turned them into a golf course.  Does the world really need another golf course, just so The Donald can make even more money?  No...  On the other hand, when it comes to business, the man is a genius.  If you have ever watched Trump in action on "Celebrity Apprentice", he is able to see right through to the heart of a matter in nanoseconds.  His instincts are right on point, and he never falters.   He may be the comic relief at the moment, but I think he will end up being a serious contender.  And usually what Donald Trump wants, Donald Trump gets.

American politics are just so much fun.  You couldn't make this stuff up...
Posted by Jo at 8:12 AM

Well, Ronald Reagan used to be in movies with those of the ape family. He turned out to be a fairly good president so why not the Donald? He's a pretty savvy guy, so this should be a veeeeerrry interesting race - a lot more interesting than ours, that's for sure, eh? lol

I am still not convinced he is going to run...we will see. I do think he is a great business man and perhaps he could run our country better than a politician...however he has gone through 4 bankruptcies and I lost count how many marriages 3? 4?

He will be out long before any states start voting.

haha....i guess you are joking.
This guy shows what showmanship can do for you..

"Maybe it's time for a businessman to run America like a business."

Who do you think runs america??

Look , USA has all the resources , skills and technologies needed to solve all its problems..everyone of them.

But its main problem is that its policies are mostly directed by "big business" and "military-industrial complex" fully supported by a media whose main sponsors are again the same businesses ...

I would like to see someone like Ron Paul (from right) or Sen. Bernie Sanders (from Left) as the next US president....

Hey! Please Re-post that post you had up yesterday about Kate and William!!

I did not have a chance to read it - just saw it - and I want to see it since you follow the Royals very closely.

You know what you are talking about regarding the Royals (unlike 99.8% of Americans who know absolutely nothing about the Royals -- and I include myself in that group).

As for Donald, well, we'll see. I remember no one took Ronald Reagan seriously and he is now regarded as one of the best Presidents we ever had.

I like Celebrity Apprentice; I'll admit it's entertaining. As for Donald's political agenda, who knows? I think the US was so damn certain about Obama being the answer that they no longer trust their own judgement. In a situation like that, who knows what's going to happen?

Has anyone thought about the fact that the whole shebang in December of 2012 comes a mere month after the election?

American politics. Not so much fun! Not for us down here, stuck with them. :-(

Trying to struggle through all that "promised Hope And Change" that some naive people voted into office.

Nothing could be worse than what we are stuck with down here, now!!!!

Actually Mr. Trump is in favor of instituting the Canadian Health Care Option for U.S Citizens. We will keep doing health care in our usual manner. But now we will send our medical bills to Canada!!!

He makes me utterly sick, but others have expressed your views to me as well, and they have merit. We badly need someone to save America, on that most people agree.

First off, I don't think he's serious. I always assume he's drumming up publicity for some new business venture.

Secondly, how can anyone take him seriously with that hair?

Third, he'll never survive the assault of the religious right with his checkered background. Although I could be wrong on that one...he's now being quoted as saying he's a "Sunday church person" and he "goes to church when he can. Christmas. Easter." You know.

Finally, I agree with Mia...he'll be out of the running long before it's a serious race. (god willing...lol.)

Interesting in deed. During these times, I don't envy any man or woman in the White House...

I just cannot believe he is really a serious candidate. But I know absolutely nothing! It's definitely entertaining...

You said it all with "weird" and "wonderful." But soon (I hope) it will get a lot more serious than just being another reality show.

I missed reading "The Wysteria Sisters" and went to read it. I did so, in Google Reader. But when I went to say a Yes, Yes comment, it is no longer in your blog.

Yoikes! Did you get picked on so much, in comments, that you removed it? No fair! Don't fold for unhappy comments. Please don't.

And chuckle, what was so horrible about "The Wysteria Sisters" for pete's sakes?!? What frosts me the most, is the lather some in the press get in, over how THIN they are. Yikes, don't young girls have enough trouble with body image, without hitting them over the head with this form of... go out and starve yourself? -sigh-

If nothing else, I think Trump won't run because he won't want to disclose his finacial records.

Besides, the "Tea Party" would never let him win the Republican Primary. As someone said before me... Trump is just too human for his their liking.

I like the Donald. He can back his own campaign and not beg for money to back it!

I think a good businessman would be the best for running a country. All we have here now is top jobs for friends and family - some of whom can hardly read or work a computer. Our newspapers have 'Corruption' articles on every page. It makes me sick how Nelson Mandela's ideals have become dust. The ANC now is nothing like it was in the years of the struggle. And so we become like the rest of Africa. To me politics is not amusing: world-wide, it's just lies, lies and more lies.

Personally , I would feel more confident and safe with a president that among other skills can fly a plane. Pilots are tested for strength, courage, integrity.
For some reason, americans prefer actors, saxofonists, community organizers - and that doesn't look good.

As a matter of fact,economists foresee an inevitable USA economic collapse within five years.
So, american politics is rather worrying, not fascinating.