Be Careful What You Wish For...

One of the favourite pastimes of Canadians is watching American politics. It's the ultimate reality show, and much more entertaining. Shakespeare would have had a field day with American politics, there is so much material for plays, and perhaps the occasional sonnet. "If chance will have me king, why, chance may crown me." ~~ Wm. Shakespeare, Macbeth. ACT I Scene 3.  The characters in Shakespeare's plays were partly based on real people, but were mostly fictional.  They were full of human faults and foibles, and got themselves into all sorts of scrapes, because sooner or later, their humanity rose to the surface.

American politics is filled with just such characters.  They stroll across the stage, perform their part, and then vanish, stage left ~~ many of them to ignomious fates.  (I predicted John Edwards' downfall while he was still the "It" boy in the Democratic presidential campaign...No one believed me...)  Others just sputter and flame out, while others don't know when to make a graceful exit.  Watching them is just too much fun, and since we Canadians really don't have an investment in American politicians or politics, we can watch them all ~~ Democrats and Republicans ~~ with equal delight. 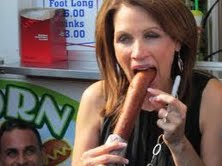 Michele Bachmann won the Republican Straw Poll in Ames, Iowa yesterday.  She is a founding member of the Tea Party Caucus, and her husband runs an organization for *reparative therapy*.  His motto is "Pray away the gay...".  I am always suspicious of ultra-conservative folks who base their lives on being judgmental of other people.  It will come back to haunt them, and rightfully so.  And this unfortunate photograph will come back to haunt Michele Bachmann, a future candidate for President of the United States.  Yes, there is a God, and She has a sense of humour.

The newest player on the American political stage is Governor Rick Perry of Texas.  He is going to be an interesting candidate to watch.  Oh, yes.  I'm not going to tell you what I predict with this fellow.  I would rather leave it up to your imagination.  Let me just say, I believe Shakespeare would be sharpening his quill as we speak.  This character is too good to be true.

Politicians .......... they are all crooked as far as I am concerned! But you are right about the entertainment factor!

I think the Good Governor would ask us to bow our heads in prayer as he asks for our $$$$$upport ....

Reminds me of the man who shakes your hand while pulling your wallet out of your back pocket with the other.

Being a Texan I know exactly what you mean!
Been wondering how your doing. Miss coming by I need to catch up while I am here
Love
Maggie

Another Texan here. I have to say I can't believe anyone wants Perry to run. It seems they have over looked the fact that he is extremely unpopular in his home state he won reelection with less than 40% of the vote.

I would find it funny except Perry is the only politician who has ever struck me as being truely evil.

The voting public absolutely baffles me and makes me wonder about their IQ. Reminds me of the saying - you can fool all of the people some of time and some of the people all of the time...why in politics are so many people fooled so often?

I see Perry less like Edwards and more like a less privileged George W. Bush. Perry was in Alabama recently, where I live, and was well-received. I don't understand it and I can't explain it.

Oh, how I wish I could watch with the detachment of a Canadian. For me, it's like a train wreck. I don't want to watch, but I just can't pull myself away from it. Just when you think the choices can't possibly get any worse...somehow, they do.

And I could swear we just did this. How can it be time to start again???

Yes, Jo, it must be nice to have a nice ringside seat as your political antics are there for the world to see. I would be a Canadian if I could. They are too smart; they don't want me! :-)

I once liked John Edwards...something I'm MORE than embarrassed to admit today. It was years and years ago...but still...the thought of how he sucked me in makes me ill. I'm not a Dem...no longer a Republican...I feel like sometimes I have no party at all.... :(

Every single time I hear from ANY politician out there it makes me feel like I might just might throw up a little bit in my mouth.

Sorry for the mental picture. I'm hoping my true feelings come shinning through...

I am not wishing for him, that's for sure! Edwards fooled me once, but he and his ilk will not do so again (I hope).

Ah yes. It is sad, as an American, but I'm beginning to think that we are becomming the whoopee cushion of the world.

If Perry gets elected, prepare for a mass influx of Americans into Canada. Except for the lemmings who elect him. The cream no longer rises to the top, but it seems the dregs do. America has become a laughingstock. The Founding Fathers must be rolling in their graves.

Personally I believe all ends of the political spectrum from local to federal are so out of touch that when the powder keg they have created explodes they will actually be honestly surprised.

And when combat trained urban warfare troops are turned loose on a revolting population the citizens will be surprised.

I personally will not be surprised at anything, even the possible election of Perry because if business' in America confers the crown on him than thus it will be.

I'm not wishing for any of them at this point.

Perry and Bachmann are the most dangerous sort. While they plot the evisceration of the common people, they claim God told them to run. I hope these tea party fruit cakes are a flash in the pan, before they ruin us all. I never to fail to vote, and I surely don't vote for people like them.

Jo, you are very astute. I'd vote for you in a heartbeat.

"Yes, there is a God and She has a sense of humour."

LOVE it! Please make that into a bumper sticker, someone!

I admit it's hard to defend the antics of American politicians. But in their defense, look at Italy (Silvio Berlusconi -- mafia collusion, false accounting, tax fraud, corruption, bribery, sex scandals). Look at Syria (a dictator who murders his own people). Or France (can anyone say Dominique Strauss-Kahn). Or Russia (Putin, an autocrat sans shirt). The list goes on and on.

Looking at the picture of Michele Bachmann taking that HUGE corndog into her mouth reminds me of something ....

I wish I could think of what it reminds me of ....

Well, I am sure if I keep thinking about her taking that HUGE corndog into her mouth it will ... come ... to me eventually.

Politics is a circus but hardly an entertaining one. Politicians everywhere in the world, are the worst clowns and acrobats - a danger to themselves (assasinations) and to their public.

Whenever I see this Election Theatre on TV, I am so glad I am not American.

The USA isn't anymore what it used to be.
Just another Rome, that is about to fall.

Also, this reminds me... the more they talk of God in american Elections & Politics, the more I think of US-Sharia, just with Jesus instead of Mohammed in the front row.

What a horrible photo! Yes, it's unfortunate that politics in our country has become such a joke. I don't even like to listen to any of them. God help us!

I wish I could be a Canadian and see it from your perspective because from here it's really annoying! I can't stand it. Blah, blah, blah.