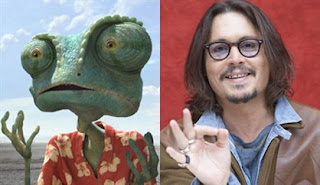 Whenever Phinnaeus and Marigold come to visit, I always use it as an excuse to watch animated movies. I'll say to them, "Let's watch Rango...!"

What kid doesn't love animated movies? Well, apparently Phinnaeus and Marigold. I guess they are just at the age where animated movies are for *babies*. Fortunately, I am way past that age, and I love animated movies. The movies being created these days are not just animation, they are works of art, and I'm gobsmacked at how beautiful they are. Not only that, but *A* list stars are lining up to perform in them.  Johnny Depp as the lead character in "Rango" is nothing short of inspired, and one gets the feeling that he was just ever so slightly inebriated when he was voicing the part.  In any case, he was certainly having a lot of fun.  The rest of the cast included ~~ amongst others ~~ Isla Fisher, Bill Nighy, Ned Beatty, Abigail Breslin, Alfred Molina, Harry Dean Stanton.  How wonderful is that?   If you haven't seen "Rango" yet, you're in for a huge treat.  Everything about it is absolutely perfect.  Watch for a brilliant cameo performance by Clint Eastwood. 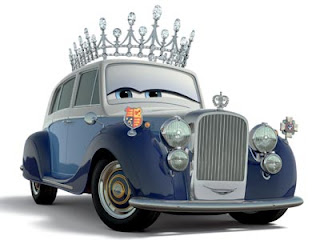 My other guilty pleasure this summer is "Cars" and "Cars 2" ~~ in 3D.  Omigoodness.  "Cars 2" takes place in London, Paris and Monte Carlo.  The leading character, Lightning McQueen, is voiced by Owen Wilson.  The rest of the cast consists of Michael Caine, Emily Mortimer, Larry the Cable Guy, Bonnie Hunt, Joseph Mantegna, John Turturro, Eddie Izzard, Franco Nero, Vanessa Redgrave (as the Queen of England), Cheech Marin, Katherine Helmond, Tony Shalhoub ... the list goes on.  In the original "Cars", there was an aging race car named Doc Hudson, and the character was voiced by Paul Newman. In the second, "Cars 2", Lightning McQueen paid homage to Doc Hudson, aka Paul Newman. Once again, the artwork is beyond spectacular, and the movie is filled with cute *in* jokes and nuances ~~ "Is the Popemobile Catholic?" I'm so glad I'm not a kid anymore, and I can enjoy these movies with unabashed pleasure. They are truly works of art in every way.

Here is a short clip from "Rango". Johnny Depp is having way too much fun, and so am I.

I would never have thought of these 2 films, as viewing suggestions. Goes to show what a grumpy ol' stick-in-the-mud I am hu?

Anyway, thank you for the reviews. Just might take you up on them. :-)

I'm with you Jo! I love animated movies. I think I have seen Finding Nemo 101 times! And Shrek...love Shrek. I actually have the first CARS movie and haven't made time to watch it. I'll have to do that before the summer is out.

Btw, they call you Oma? As in German? :D

I loved that clip, Jo. Loved it!! I was glad when my sons were young that I had an excuse to go and see animated movies at the theatre. The Disney ones were always excellent. I've also heard that Tangled is quite good.

I absolutely ADORED Rango - saw it the other night and laughed myself silly. Maybe I should check out "Cars" as well.

Oh my! I hope they have been made to realize what they were missing! Now I just HAVE to go see Rango. And Tangled, too, I hear is very good. Thanks for the clip, Jo!

I loved Rango too! I haven't seen cars 2 yet but I know I will love it as much as the first. Have you seen "Up" yet? You will love it

how right you are - fabulous! Now I'll have to watch the whole movie (Rango), with or without kids!

I love animated movies. When my daughter was younger I think I liked them more than she did!

Of course there is always a lot of adult humor in those movies and even in the classic cartoons that the kids don't understand.

I wonder if the writers do that on purpose? Heh!

Not a big animated fan, but I do like Johnny Depp, so I'll have to see Rango. Thx. for the tip!

My friend and I love most movies, but we weren't so keen on Rango - the creatures in it were so ugly, and the morality tale a little heavy. I loved 'Cars' though and our favourite this year has been "Gnomeo & Juliet" - very funny. Tomorrow - it's Harry Potter ! I'm taking my knitting as it looks rather long.

This is great! I loveJohnny Depp,and also animated movies (and Westerns.) I loved the Toys series, but this looks even better.

I would love to see any movie that isn't at least 10 years old! No, not really, I would just fall to sleep anyway. I always loved watching the animated movies with my grands that are now way too old to want to do that. The younger ones now are so into the computer and tend to watch everything on separate screens. No fun!

My boys went to see Rango and liked it. I like Johnny Depp in anything. Cutey patootey. D

Something else we have in common. Cars is a big favourite and I actually have Rango on my laptop at present but have not had time to watch it yet. May Rango is just what I need for this Saturday night.

I too love animated movies and apparently the animaters were also having way nto much fun- love the pepto-bismol latrine. This is next on my Netflix request can't wait to see it. My favorite for the sheer beauty of it is Legend of the Gaurdians the theme is a little more grown up so maybe your grandchildren will enjoy it more and it can sure spark some conversations because of the theme.
Johnina :D

I love animation. I guess a big part of me never wants to grow up.

I agree about Johnny Depp - there's always an underlying sense of fun in whatever role he tackles.

That bottom videoclip looks like he is next to that giant sparrow at Olympic Village!