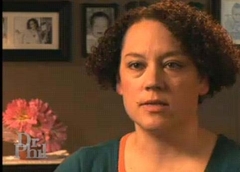 Jessica Beagley has been found guilty of child abuse, after video-taping herself pouring hot sauce into her son's mouth, and shoving him into a cold shower ... amongst other horrible things. I have seen the video twice, and that was enough for me. I wanted to reach into the camera and rescue the little boy from that disgusting woman. All mothers get frustrated with their children, it goes with the territory of motherhood. But what Jessica Beagley did to her son crossed way over the line into abusiveness; in fact, it may even be considered torture. Thank God she was stupid enough to video-tape it and then go on Dr. Phil's national television show so the whole world could see what she was doing. 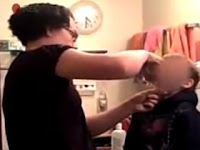 This little boy was adopted from Russia, where this case has attracted attention because of growing concern about adopted children from that country facing abuse in the United States.  "Beagley and her husband had struggled with the boy, who was adopted at age 5 along with his twin brother from an orphanage in Magadan, Russia, Ingaldson said. Both boys have since been diagnosed with an emotional disorder stemming from their difficult early years in Russia and are now in long-term therapy, the defense lawyer said." ~~ Toronto Sun.

Now this little fellow faces more emotional and physical trauma ~~ more than any child deserves in his short years.  The children are remaining in the family, and Child Protective Services are involved.  I hope they keep a close eye on this family.

Jessica Beagley will be sentenced on Monday, and she could face up to a year in jail.  She'll probably get a slap on the wrist ~~ no pun intended ~~ and be free to continue being abusive, not only to her children but to her husband as well, I suspect.  I don't think we have heard the last of this woman.
Posted by Jo at 8:10 AM

"I have seen the video twice, and that was enough for me."

I just happened to be tuned in to this particular Phil show. Watching it once was too much. My prayers continue for this little boy.

They left the children there!!! Why? Whoever made that decision should go to jail with the "mom"!

Evil woman and let's hope she gets appropriate punishment. But I feel very sorry for the boys - they might be scarred for life. Cheers ~ Eddie

A bad start in Russia and now an abusive homelife. Do those boys have a chance at a normal life - they probably have no clue what 'normal' life is.

I have not watched the video and I don't think I could stand it. I agree with her sentence.

I read on FB today where someone said that she didn't commit abuse; she was just guilty of being stupid. Both are true.

I also have not watched it. How awful for the children. But to videotape it and then go on national TV? I'm speechless. Poor kids.

If he didn't have emotional problems before he would certainly have them now. Why, oh why do these kind of people choose to have children? I will never understand it.

Some people should not have children.

Ever think she did it to get her stupid ass on TV? I'd take this dog out back and put it down.

that is just wrong wrong wrong....These boys have been scared no pun for life. I struggle with this...do family services remove them..upset them again..hoping that they will find them a good home? Do they leave them there...get help for the parents and the children...I don't know....I just know I feel so sorry for those children.

I've heard of this case before, and cannot imagine why the children were not removed from her home. It is absolutely abuse -there is no other word for what she has done.

Could it be that she adopted Russian children because she had trouble getting approved to adopt in the U.S.?

Paula - It is just as hard, and even more rigorous to adopt children from Russia. I speak from first hand experience.

My first reaction to Beagley's behavior was anger and disgust, but I also question the agency that coordinated the adoption both stateside and in Russia, and their lack of proper counseling and failure to followup with the Beagleys until the children reach age 18.

Paula, probably not regarding your Russia/US question. It has more to do with availability of caucasian children. (I'm guessing they wanted caucasian children, but I could be wrong.) Russian adoption is EXPENSIVE too...way more expensive than domestic, but getting a child is quicker than in the US. I'm a an adoptive mother (domestic transracial adoption), and we had to sign an agreement (LEGALLY with our state), that we would NOT not use corporal punishment. This lady went beyond corporal punishment into the realm of torture. I think these children should be taken from her home, but I doubt it will happen. (Seeing her husband is a police officer, I'm guessing she was given a bit of favoritism with the sentence. I mean, the judge said ""Outside of this case, you're a good mom," Wallace said as he handed down the sentence before a small courtroom filled with maybe a dozen onlookers and a line of cameras." That's crazy!!!!!) Anyway, there are so many levels of these children being let down by the adoptive system. Were the adoptive parents properly prepared for the possibilities of reactive attachment disorder? Probably not. Most adoption agencies want it to look like adoption is all rainbows and butterflies, 'cause there's so much $$$$$$ involved. Did the family get enough support AFTER the adoption...dealing with the reactive attachment disorder? Who knows? But ultimately, these children should be taken from them and a new home should be found where the (new) parents can better deal with the trauma these children have gone through....the trauma of child abuse, the trauma of being moved to a new country at the age of 5 (and learning a new language), and the trauma of their earlier neglect in Russia, AND the trauma of losing their birth parents. Children are NEVER lucky to be adopted. Every adopted child has suffered the loss of his/her birth parents and family. That's trauma all by itself.