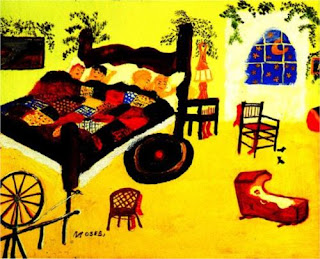 If Grandma Moses were to paint this wonderful little folk art painting today, she would have to name it something else, as it would no longer be politically correct to call it "Waiting for Christmas". It would have to be named something like "Waiting for Santa", or even worse "Waiting for the Holidays". Bah humbug. Every year Christmas slips farther and farther away from us, until it has become something we don't recognize anymore.

As a teenager, I read George Orwell's "1984" and it disturbed me so much, it stayed with me. I remember thinking, "Thank goodness we live in a civilized world where such things could never happen". But they have happened, and are happening now. There is a dictionary of "1984" Newspeak, and it is chillingly similar to much of the politically correct language we use today.

Newspeak - The official language of Oceania. Newspeak is "politically correct" speech taken to its maximum extent. Newspeak is based on standard English, but all words describing "unorthodox" political ideas have been removed.

Oldthink - Holding on to old ideas and patterns of thought not consistent with current government policy. Maintaining a belief that is no longer acceptable, but was normal just a few years prior.

Crimethink - To even consider any thought not in line with the principles of Newspeak. All crimes begin with a thought. So, if you control thought, you can control crime.

Sound familiar?  We have allowed this to happen. I know people ~~ real, live actual people ~~ who are afraid to say the word Christmas. "Shhh, you can't say that word."

I want Christmas back.  My Christmas.  The one that feels magical just saying the word Christmas.  It has an aura about it that evokes the smell of cinnamon and pine trees and a crackling fire.  Oh, I know, I know, it was originally a Pagan celebration of light, and we ursurped it and turned it into something else.  I get that.  But most cultural holidays have evolved in one way or another.  I just don't want my Christmas evolving into something crass and sterile, like Pottersville in "It's a Wonderful Life".

In our culturally sensitive world, we celebrate the holidays of all folks ~~ Ramadan, Rosh Hashanah, Diwali, Yom Kippur, Tet Nguyen Dan, Chinese New Year, Hanukkah ~~ and so many more.  We would never dream of asking them to change the name of their cultural festivals, just to accommodate us.  Why on earth are we doing it to accommodate other folks?  Whether we are Christian, non-Christian or atheist, it is not *Holiday*, it is Christmas, and it is celebrated by over one-third of the world's population.

I love everything about Christmas.  It's a really lovely time of the year.  Next Thursday is December 1st, and I can hardly wait for Christmas.  Let the fun begin.
Posted by Jo at 11:16 AM

Great post. I totally agree with you. I am not going to be forced to quit saying Merry Christmas.

By the way, I pretty much finished my CHRISTMAS shopping so now have to rummage through my storage to find all the CHRISTMAS wrapping paper, ribbons, and bows.

Leslie, LOL...!!! You're my hero, did I tell you that? I haven't even started my CHRISTMAS shopping yet. But I will definitely be ready by the time CHRISTMAS is here. :-)

I wonder when this blog post will be removed by big bruvver Jo? I think the *festive season* has changed a lot, (notice I have avoided using the C word ;-)) as I fear the thought fuzz will be ringing my bell if I used the word Christmas ... Aaargh damn and blast it!
Right, that's me done for. See you in room 101 soon.

I don't worry about political correctness when it comes to Christmas. It's an authentic (and yes, magical) holiday and people are free to celebrate it or not. But please don't ruin it for those who do.

I so agree, Jo! Sometimes the political correctness is just crazy. I once had a boss who was so afraid of offending the two Muslim employees (out of 300 Christian and Jewish employees) that she insisted I go to the restaurant where our Holiday Party was booked and make them remove the Christmas tree and all Christmas decorations from the private dining room and blow up dozens of colored balloons as decor instead. As you can imagine, the restaurant manager -- who had two other parties booked into that private dining room in the time slots after us -- was not amused. It feels so good to say Christmas, Christmas, Christmas!

Here's an idea. Claim you belong to a religious group who worships Fest I Val and Ho Li Day.

Fest I was the King of Val, a land of wonder and myth, in days gone by. The biggest celebration every year in Val was Ho Day - a day in which the great Ho, Li, was honored for her service to ... men ... who she considered to be kind (man kind).

The result will be that it will become politically incorrect say happy holidays and people will need to use the generic term Christmas to refer to this time of year.

But until then, Happy Ho Li Day!! No, wait .... that is SO offensive. Let's just go with Merry Christmas!

I would love to reprint your blog post. Please contact me if you would allow me to do so.

I disagree slightly --- I have seen more "what nots" with the words Merry Christmas on them in the past two years and yes, I buy them!

In the small town in England where my parents lived, the Moslem community campaigned to prevent the annual Nativity Play produced by the Primary School. Cheek.

Jo honey I have missed you and your writing.
I totally agree with everything you mentioned and yes it is happening and it seems to be getting worse every time I turn the news on and here something else.
Gosh I have to catch up with you since it has been way to long since I visited. I have been out of the blogging world for a while but hopefully I can catch up.
Hope you can come by and enter my giveaway.
Love ya
Maggie

I understand where you're coming from, but living in the Bible belt, I don't know anyone who is afraid to use the word Christmas. On the other hand, if you dare to use the word "holiday" people look at you as though you have killed baby Jesus. I've come to worry much less about the words these days, and focus much more on the meaning of Christmas.

Hope yours is merry!
Margaret