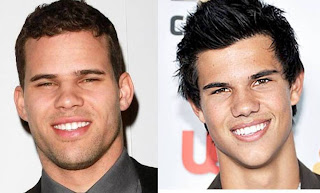 Yesterday, when I read that Kim Kardashian had filed for divorce, I saw a picture of her with her soon-to-be ex-husband. When I saw the picture, I thought, "Hey, wait a minute ... Kim Kardashian was married to the guy from the Twilight movies...?  How did I miss that...?" It is the same guy, isn't it? I must have missed that marriage, because I blinked and it was gone. I need a program to keep up with all these folks who flash across the screen and then fade back into oblivion again. At one time, I actually thought Kim Kardashian and Snookie were the same person. Who are these people? I mean who are these people? They show up on the covers of magazines, the headlines on CNN and other news sites, countless TV programs, and I really have no idea who they are. These folks are all interchangeable, aren't they?

Kim Kardashian just received about a kajillion dollars for airing her wedding on television, and another bazillion dollars for selling the photos to various magazines. I don't think the ink was even dry on the cheques yet, before she announced her divorce ~~ and it was the top headline news yesterday.  Does anyone care?

Who are these people?

No not real people. Only the people making money off of them care - their lawyers, accountants, publicists, the magazines, probably some hangers-on relatives and 'friends'. And they are all laughing all the way to the bank.

Kind of sad how fast they got married and separated. Maybe they can still work it out.

MerCyn, that is so true, and very perceptive! All the hangers on are the ones who cash in.

Journey, I have a feeling they didn't even really know each other before they got married. Very sad.

The best thing I ever read about the Kardashians, is the the comment here,

"Who are the Kardashians, are they Russian jugglers?"

Don't know much about them, but if they were Russian jugglers they would probably serve a higher purpose.

Sextant, LOL! That was my friend Russell who said that. He posted it on my blog one day. They do sound like Russian jugglers, don't they? And yes, the Kardashians serve no purpose whatsoever. None. Zero. Zilch.

Either the wedding was a complete publicity stunt and he got well paid for participating OR they had a spat and she's so spoiled she doesn't care enough about working at the marriage! Just plain stupid, either way, in my humble opinion. *blah*

Even though I know I'm going to be in the minority here...I like the Kardashian Clan. I enjoy their show. I think most of us end up doing in life what we do best and this family is beautiful and entertaining and they love living a flashy public life. I don't feel they are hurting anyone, except maybe the people who gave them wedding gifts, so hopefully they will return them...but other than that I enjoyed watching the wedding shows and I will continue to watch them. You won't find many people that say they like them, yet somehow...hmmmm, they have tons of fans and viewers and followers on their blogs, facebook and twitter, so someone likes them right?

Never 'eard of 'em - I'm so VERY glad to say.
Who gives a toss about these sleb couples, their marriages, divorces and whatever else they can flog to the gullible press and public.

I think they got married for the money since basketball is locked out still. lol Idiots.

We have too much time on our hands in the U.S.

They do look amazingly similar. I asked my daughter about a year ago who the Kardashians were because suddenly they were everywhere. She said, "Just some trashy reality show people." Yeah. I never watch "reality" shows and think these people are profoundly shallow, self-serving and crude. Two months is probably a long time to be married to Kim or Mr. Kim.

It's just you. Yes, there's a resemblance, but "exactly alike"? No.

I think the two could be brothers, but one looks a lot older than the other. I hope one is older anyway.

As a side note, I really don't blame them for making money off their lives.

It's not the job I would chose, and yeah, they could be doing something more useful with their money, but I could say the same thing about hedge fund managers, but no one is blogging about them.

No they are not "exactly alike" but all these "celebs" begin to look the same to me. At least the wolf boy does some work, what exactly does the other one do that he should be given so much money so that he can be watched on TV?

America get your head screwed on right.

I didn't know who they were either, my girls told me and looked at me like I was out of touch with reality. I am out of touch with reality TV, I suppose. I have never watched them, but have seen clips of the show with the girls fighting with each other. I don't find it to be entertaining. When my children are at odds with one another it causes me great distress ...... and I don't enjoy feeling distressed.

But, that's just me. I guess I am getting old.

She thought she was dating/marrying the guy from Twilight. Apparently, it took her 72 days to realize he was not 'Jacob'.