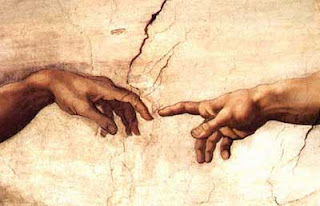 As of today, October 31, 2011, the population of our planet has reached 7 billion people. And yet, as we speak, folks in cities all over the world are sitting in fetid tents in squalid encampments, protesting that they don't have a big enough piece of the pie. Well, the pie just got a whole lot smaller.  Unfortunately, the areas of the world least equipped to accommodate extra people are the areas where population is expanding at the most rapid rate. In North America, however, the population is expanding so slowly, governments are concerned about maintaining productivity. In the bigger picture, the earth is made up of the *haves* and the *have-nots*. As we edge even more quickly to the 8 billion mark, here are some things to consider.

According to an article in this week's Time Magazine, the earth has enough resources for everyone on the planet, the resources are just not being distributed to everyone.  People don't have access to resources because of extreme poverty and corrupt government regimes.  I am fortunate enough to live in a country that did not have a housing bubble or any housing collapse or mortgage failures. Our banks did not get overextended, did not have to be bailed out, and are still lending. Unemployment and poverty remain lower than at any other time since the 1960s. There are so many jobs in Alberta, the immigration department is fast-tracking immigrants from other countries who apply here for work. Our country is really one of the more fortunate ones.

The economic crisis is world-wide and impacts everyone on the planet, but probably none more so than the billions of people who live in extreme poverty. We need to slow down the population expansion before we hit 8 billion, in 14 years.
Posted by Jo at 8:05 AM

Yes, Jo, too many people in too small a space and not sharing our resources with the needy. Mankind will NEVER learn from past mistakes and we seem quite incapable of solving the basic problems. Why? We are too greedy.

Aye - only last week we were watching a poverty stricken country where the norm is to have at least 6 children - I despair!

I wonder what I, personally, can do about this issue - other than appreciate where I live and do what I can in my own neighborhood.

This kind of thing is just mind blowing isn't it?

What if we gave to people, not because of their standing in the community or even whether they were even good or bad, but simply based on what they needed from the community. How different would our world look?

I remember when I was young and contemplating 6 billion at the turn of the century. Now here we are with yet another billion, and the growth is exponential. I've written about this a couple of times; nobody seems to pay much attention to it.

And Canada is one of the success stories in the global meltdown.

Seven billion people! Quite a few! The western democracies can take pride in their birth rate. However, I read somewhere about two decades ago that a child born in a western democracy has the environmental impact and energy consumption of 25 children born in a third world nation. So there is plenty to despair all around.

While there are enough resources to spread around, the danger falls in running things out to the edge of disaster. Bad weather, a bad crop, a new blight in a world with few people can easily be handled. In an overpopulated world, they become disasters.

Controlling ones fertility makes a difference. My mother has 3 decendants, me, my sister, and my son. Her brother, 8 years older than her, has something on the order of 65. Obviously I am looking at something of extremes here, and the brother's gene line is certainly the evolutionary winner, but from a environmental impact viewpoint, there is something to be said for having one or two children instead of four. There is also something to be said for not having children at all.

Something to consider...for everyone that comes in, one goes out.

Great information to think about during the Occupy process.

A population of seven billion is a significantly challenging situation, and is going to need a lot of concentrated effort.

Eddie, I think mankind is indeed very greedy and selfish, sadly. It's great to see you again!

Denise, yes, the poorer the country the higher the birth rate. It's sad.

Linda, you are so right! We all have to appreciate our good fortune to be living where we are.

Katy, what a wonderful thought. There are so many people out there who could benefit from that type of thinking. :-)

DJan, yes, Canada is very fortunate, indeed. I think it is our practical natures. :-)

Sextant, I had not thought of that before, how a child born in a western country has the environmental impact and energy consumption of 25 children born in a third world nation. That is true!

Kimberly, yes, that's the circle of life, isn't it?

Rob-bear, I wish I supported the occupy process, but I just don't. I think they are a bunch of flakes without a clear agenda. Their agenda is all over the map. I mean, demanding that CBC have no commercials? *sigh* Sitting in stinky tents is not the way to change things, sadly. The longer they stay, the less credibility they will have.

My grandfather sired 22 children, via two wives; most were female so I have plenty of old aunties whom I've never met, and a few uncles too.
My father sired 5 boys of which I am the eldest.
I sired a son and two daughters, so the head count is going down.
My son has just one daughter.
My eldest daughter has just one daughter.
My youngest daughter has a son and a daughter.
As the 20th century progressed we became more educated and more aware of what raising kids really meant.
Hopefully the trend continues to be *careful* about bringing too many kids into the world.
Trouble in the UK is that too many stupid young women are having kids, often single mothers, just to get child benefits and a roof over their heads. Sad, very sad.
Oh, shut up Phil ... OK, byeee.