Beyond Here, There Be Dragons... 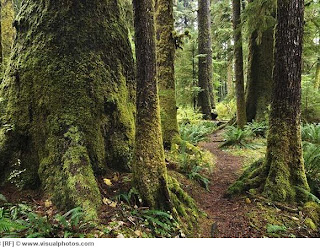 The story I am about to share with you is one I have never told another living soul ~~ until now. It is up to you to decide whether or not you believe it, but it is a true story. It was something I experienced as a child, and as every child knows, not all their stories are necessarily accepted as the truth. And that is why I have never told my story.  I convinced myself, as well, that it was something that I had imagined, it had not actually happened, and it was consigned to that area of my brain known as ~~ perhaps ~~ unreality.  But now that I am of *a certain age* I can remember that it did indeed happen;  I did not imagine it.

When I was growing up on Vancouver Island, my parents decided to build a home on the edge of a dense old growth forest.  It was a beautiful old forest of Sitka spruce, western red cedar and Douglas fir. Every weekend we cleared the trees and burned the underbrush in a bonfire.  My mother loved roasted potatoes, so she used to bring potatoes and throw them into the fire to roast.  We would have a picnic of cold chicken, hot coffee and roasted potatoes from the bonfire.  It was delicious.  My mother kept some of the giant ferns growing in the underbrush and later planted them in her garden.  My father saved a couple of the old growth trees, and they shaded our house when it was built.  My mother designed the house, and my father and his friends built it by hand.  Some of the two-by fours were planed from the wood of the giant trees, and it was wonderful to watch the house taking shape.  I was allowed to choose which corner of the house I wanted for my bedroom.  I love the afternoon sun, so I chose a corner facing west.

We moved into the house in the middle of winter, when I was 11 years-old.  There were still natural ponds in the forest, and my friend Sherry and I used to go ice skating on them.  I taught her how to do figure eights, and then we would trek off to her place for hot chocolate and some of her mother's world famous cinnamon buns fresh from the oven.  Afterwards I would walk along the forest trail that connected her house to mine.  I never felt comfortable walking through there alone, and I was always aware that I was not entirely alone.  I could feel things watching me.  There were eyes on me, and they didn't necessarily have my best interests at heart.

Every morning my father woke me up for school before he went to work, and one morning he said, "Be careful, kidlet, there was a cougar out there last night.  I could see its footprints in the snow, and they were the size of tobacco can lids..."  But this was the forest, and cougar, deer even the occasional bear were to be expected. This was their territory, and we were encroaching on it. We had learned to respect those animals, and they left us alone.

But I knew something else was out there. 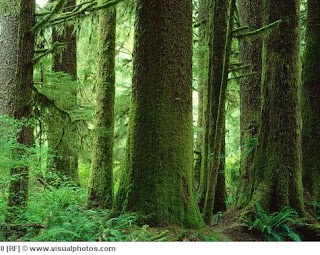 Then one morning I saw it, just beyond the edge of the forest, and its tracks were still visible in the snow.  At first I thought it was a bear.  The tracks led from the forest to my bedroom window, and then back to the forest.  They were not cougar, deer or bear.  And they were not human.  They were barefoot and they looked like a flat-footed ape.  With very big feet.  The Coast Salish have a name for this creature ~~ Sésquac which means "wild man". The Cowichan People gave him the name Thumquas which means "hairy giant". They believe he is omnivorous and nocturnal. And real. The Coast Salish also believe the Sésquac steal salmon from the fishermen's nets. He is seven to nine feet tall and there have been hundreds of thousands of sightings of him in Western Canada, and 700 footprints collected. There is folklore of these creatures living on every continent except the Antarctic, however, no one has ever found one of these creatures, nor any of their remains. Scientists claim there are still over five million species waiting to be found on our planet. Could the elusive Sésquac be one of these creatures?

Slowly the forest receded from our house, as more people built homes in the area, and now it is a residential district. Some of the old trees still remain, however, and I can still feel the spirits in them. And when I am walking through an old-growth forest, I can still feel something watching me ~~ and it isn't animal, and it isn't human.
Posted by Jo at 10:13 AM

Well, Jo. I see no reason NOT to believe you. I Find it so egocentric for us to believe that, because we cannot PROVE the existence of something, it is not there.

Duh. KInda like proving the existence of God. We can believe or not.

I choose to believe you saw something miraculous. And your pictures took me to some scary yet wonderful place. Surely such a creature could be there.

You know me enough by now to know I would be one who jumps smack into this story with complete belief. I love it. (Boy. Good thing how you tell us you are not a writer or I might keep thinking you are... DOPE.)

I have shivers just reading this! But who is to say? If you felt it, it was real. And I agree with JeannetteLS - good thing you say you're not a writer...I, too, would call myself a "dope." lol

WONDERFUL! Thank you for sharing this.

And I must have my husband read this post, because he loves all connected with "Big Foot" or "Sasquash" or whatever the local name, happens to be.

And now, he can really believe.

Expertly told Jo. A mini Kathrine Mansefield short story. And I too believe your tale. Bigfoot, Yeti, Sasquatch or whatever, I feel there ARE creatures lurking around just *looking* in their inquisitive way.
My earliest memory is when I was probably around four years old. We lived in some grotty flat, the top (third) floor. Yes, we were very poor in 1939.
My dad came out to the wooden staircase at the rear of this building in Parson's Mead, Croydon, and found me sitting there on this very cold winter's night. I remember him picking me up and taking me back to my bed, and my mum frantically asking WHY I was sitting out there in the dark. I said I was "Waiting to see Jack Frost". I'd heard dad say that Jack Frost would be coming to the garden tonight and I just wanted to see him. Kids eh?

i think the stories have been passed
around to frequently for it NOT to
be true. you should feel thankful
you were not hurt!

There are many things in this world we cannot or do not understand.

It is best to be accepting and open to what other people have experienced and to have respect for them.

Quite often a person cannot not appreciate something until they have actually experienced it themselves.

Your experience in the old growth forest sounds ... haunting.

Oooo! Good story, and certainly he must exist, and to have seen his footprints. You are a very fortunate person, I would think. Well told, too. Thank you for sharing this.

I have always liked local lore such as big foot and Nessie, but I have also always held them as, well, you know, colorful local lore. You provide some interesting facts about the sightings and footprints. Yet as far as I know, a Sasquatch body has never been found. Where do they go when the die? Why does one never get shot or hit by a car? Forget photos, they mean nothing today.

You state that you seen one. OK! Jo, for most people in the world I would say "Hmmm! A sasquatch! Really? How nice!" Then roll my eyes and walk away. But this is Jo here, not most people. Not one for telling tall tales, I have to give credence to what you saw.

I am really going to be pissed at you, if you are conducting a psychological experiment, and post tomorrow..."see you gullible dummies, somebody you don't really know but trust on the internet says they have seen a sasquatch and you believe them! Ha Ha!"

I have always believed in the Sasquatch people, and have also experienced one in the mountains of Western North Carolina. I was wading in a stream through old growth forest when the air changed in ways I cannot describe. Then I heard thunderous footsteps coming toward me and saw the tops of huge trees moving, although there was no breeze. I got out of there as fast as I could, but I will always believe I was in close proximity to one of those creatures, and that they are not mythical at all.

I do regret that I didn't see him or her, but survival took priority over curiosity in that instance.

Jeanette, thank you for the lovely compliment. That is very special, coming from you. :-) And yes, the old growth forests are very scary and mysterious places.

Leslie, thank you...! That is indeed a compliment, coming from you as well!

Auntie, until I am proven otherwise, I continue to believe what I saw. :-)

Philip, what a cute story! Waiting for Jack Frost. That's kind of like sitting up on Christmas Eve, waiting for Santa. :-) And thank you, too, for the lovely compliment.

Lea, yes, the stories and the sightings are really entrenched all over the world!

Russell, yes, it was haunting. And to walk through those old giant forests, you really can feel the spirits in there. They are very real...!

Djan, thank you. And I would have thought you would have come across some footprints in your treks through the mountains of Washington State. Keep your eyes out for them!

Sextant, *heh*, no this is not a psychological experiment. I do believe Sasquatch exists, and Nessie too. However, having said that, I would like to see some concrete proof. Where do they go to die? Perhaps caves that are inaccessible to us? It is intresting, isn't it?

Susan, yes, I do believe you encountered something. And usually they are accompanied by a very strong smell, too. So many people have had encounters with them, that I don't think they should be discounted.

I had a friend Henry who was very spiritual and he'd tell me stories that were just amazing, and I'd say, Henry, you are the only person who can make me believe in angels.

Now you are the person who's making me believe in Sasquatch ...

Sightings, I have been aware of Sasquatch since I was a very little girl. And if you were to see the old growth forest here, you would understand. *heh* Even looking at those pictures, you can see them. :-)

Catching up on all your wonderful posts... this one is magical as is the story about your family menagerie.. that little murre following your mum around. very moving pieces, as always Jo.