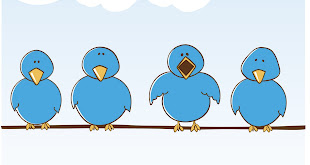 I love the word Twitter, don't you? It sounds like something old Aunt Agatha would say when she's had one too many glasses of sherry.

It's a silly word, and it really does describe the practice of tweeting. On Twitter.

I have to admit, I have a Twitter account.  I have used it once.  It just seems silly to me ~~ almost like a form of Tourette's syndrome, where people are shouting out strange utterances, but they're doing it on line.

"I'm drinking a cup of coffee!"

"I'm driving to Spuzzum to visit my cousin Betty-Lou!"

Omigawd, how did we survive without announcing our every waking thought and action?

In 2009 an American research company analyzed Twitters' tweets, with the following results:

From what I have read of Twitter posts, it's more like 90% pointless babble.  It's a very strange phenomenon that this is how the human race has been reduced to communicate.  As of 2011, 200 million users were generating over 200 million tweets per day. What I want to know is, what the h*ll are they all saying?  When Michael Jackson died on June 25, 2009, Twitter servers crashed after users were updating their status to include the words "Michael Jackson" at a rate of 100,000 tweets per hour. 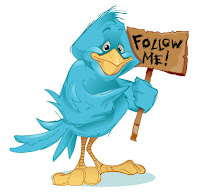 Twitter messages are completely open to anyone in the public who wants to log on and read the *tweets* written by *twits*.  And some of it is ... well ... very personal.  If someone has, say, 400 followers, whatever that person tweets broadcasts out to those 400 people and their followers too.  We share our deepest, darkest secrets with "friends" and often we don't know their real names or where they live.  We know them only by their monikers and their avatars, and yet somehow we trust them ~  and 400 of their closest "friends" ~~ with our confidences.  Where did this come from, this need to be hooked in with so many people from all over the globe ~~ people who are, to all intents and purposes, complete strangers to us? 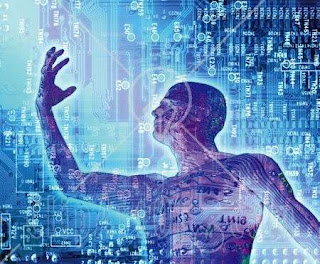 A friend of mine was quite a philosopher, and he believed that it was just possible that mankind was simply a collection of bits inside a giant computer. His philosophy pre-dated the Matrix movies, but had much the same idea. He felt we are plugged into something much bigger than we are, and we are just imagining our existance. He surmised that we are the components that go into making a separate entity, and that the entity needs us, much as our bodies need cells. We were the cells in the entity.  It made for interesting discussions, but the more I think about how we are all so closely connected by computers, the more I am beginning to realize my friend's theory may not have been all that unusual.

My Twitter account will stay disabled, mostly because I find the whole premise of it just slightly creepy.  Do I really want to know Demi Moore's private thoughts about Ashton Kutcher?  Or that Lady Gaga and Justin Bieber have the most followers?  Or that the vapid Kim Kardashian has almost as many followers as the President of the United States?  Do I really care about these people?

I so agree, Jo. Like you, I have a Twitter account because an author's "platform" is supposed to have one, but I'm mystified about what to post. I don't have any delusions that my every thought or utterance is of interest to anyone outside my family and, at times, not even to them!

I'm not a big fan of Twitter. I tried it but I can't handle being there 24/7 to read all these tweets. I do however have a facebook account that I really love.

Facebook has brought me together with so many friends from high school and so many cousins that I normally would only see at weddings and funerals. Now I see them all the time, I see their kids and their kids kids!

I guess I'm a twit, too, 'cuz I won't get an account. There's a certain someone on my FB who tweets everything on there, and I just scroll down past her. What a total waste of time!

yikes! I don't even know who those people are...
never twittered, or Fb, I'll stick to the blog.

Sounds like a very perceptive friend. You refer to him in the past tense. None of my business but if he is no longer your friend (due to moving, death, etc.) sounds like he left an imprint on you.

Sometimes a friend can be with you long after they are gone.

Dr. Kathy, yes, and I loved your post about methods of communication. It almost becomes overwhelming doesn't it? There seems to be no privacy anymore, either our own, or privacy from other people's thoughts. :-)

Alicia, I know! I do have a Facebook account too, and it's fun, but very lighthearted. And yes, I have found a lot of high school friends on Facebook too. It's fun.

JoJo, yes, blogging is almost full time work, isn't it? I love your blog, by the way.

Russell, my friend was a co-worker and we used to have deep, philosophical discussions in the coffee room, and solve all the world's problems. And yes, Twitter is for the birds. *heh*

But where would we all be without Twitter? Think about it. No Twitter, no Tweets, no Twits.
Imagine life BEFORE Twitter, if you can bear such a thought. It is so unimaginable that you cannot possibly imagine it.
Should the tweeting stop or fade away we should be doomed. DOOMED. I can live without it, but what about the rest of humanity?
Sorry, have to go. Time for my medication; my white-coated carer is beckoning me.
Tweet, tweet...

Tweet, tweet Jo! I think your friend understands the nature of the Universe on the quantum level - we're all connected via computer. :)

I am not a Twitterer or whatever one who Twitters is. Nor am I a Facebooker, although I must confess a minor crush on Sheryl Sandberg (Facebook's feminist CFO). One time an Internet buddy from England sent me an invite to join Facebook and look at his photos. On the invite was a photo, name, and city of my brother-in-laws friend, my wife's uncle, and my wife's cousin (different family). Cool! Then I got mad. How in the hell do these people know that I know these people? Anyhow I emailed my friend and politely declined the invite. He wrote back that he never sent me an invite. Facebook invited me with his name without his knowledge. No thanks folks, that is getting a little too creepily connected for my liking.

Why do we connect with strangers on the Internet? Simply because we are anonymous enough to pull down the walls and be to some degree our truer selves--not the pure 100% genuine article but truer than real life. I don't mind telling anyone here that I have a minor red high heel fetish. Now hold on! I don't wear them, my wife does and ooooohhhh la la la as they say. I sure as hell wouldn't tell it to my neighbors or publish it on Facebook so I could get spammed by every drag queen on the face of the earth with a pair of red high heels.

Twitter and texting. I don't know, not my cup of tea. Watch a group of young people who are friends. Each one of them are pounding away at some damned contraption in their hand and not paying a bit of attention to their real material world friend standing two feet away.

I love the Toyota commercial.

I read recently that computer servers maintaining the Internet and social networking are consuming more energy than the world wide air travel. The danger I see in all this is that these signals are sent up to satellites orbiting the Earth for relay transmission to other continents. So when I Twitter "Whazup?" to 453 friends in Australia and Europe, and they tweat back "Nutin" (Not sure if they are doing nothing or converting bulls to steers) those signals are being shot up to a satellite. Of course that signal does not stop at the satellites, it continues on into deep space. I am really afraid that after the 37 bazzionth "Whazup" that we may get a visit from that kindly benevolent alien race who will lovingly put us out of our misery instantly with a pulsating neutron beam.

Yet who knows. If you monitor a human mind at the neuron level all you have is a huge collection of electro-chemical zaps. Yet somehow those zaps come to represent an image of a tree, love for a spouse, joy at watching a child, or one half of a conversation on the internet. Perhaps at some greater level one can view 83 googazillion twitterings and get the complete works of Shakespeare or the DNA sequence for Superman.

I don't have a Twitter account and don't intend to open one. I resisted Facebook for a long time and still consider it mostly silly and shallow, but I do use it. I still prefer blogging, and better yet, actual interaction between actual friends. What a quaint concept, eh?

I have been meaning to have a chat with you about those red shoes in your avatar...

Sextant, "Why do we connect with strangers on the Internet? Simply because we are anonymous enough to pull down the walls and be to some degree our truer selves--not the pure 100% genuine article but truer than real life." That is a really scary thought, because I have encountered some really objectionable people under the anonymity of the internet. I'm sure they're perfectly nice in *real* life, but on the internet, man, do the claws ever come out...!

Twitter isn't for everyone and it's not meant to be. Unless you have a purpose, such as sharing valuable information, there really isn't a point (hence the "not for everyone" part) but if you are a company, lets say an energy company, then Twitter is a way to reach your audience. People will follow your company and then you are able to quickly and easily reach a large platform of people that are interested in energy efficiency (or Kim K or Justin) for whatever reason and distribute large amounts of information in a short amount of time. Relevant information like links to articles regarding the latest in energy efficiency, etc. Or maybe you write a blog about design... whatever your "thing" is, if you don't see a point in it and have no use for it, then you probably shouldn't be on it just because everyone else is. As far as privacy, there are controls and privacy can be customized. If you only want approved people to see your tweets, then you have the ability to enact that. Or just don't tweet or Facebook at all if you are worried about it. People need to remember that they aren't being forced to be part of either. This is a new generation, either jump on the bandwagon or stay and play in the dust. Neither is right or wrong, just personal preference :)