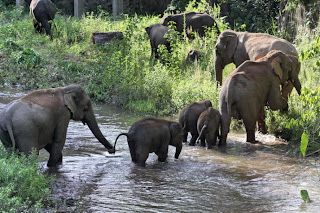 I am always surprised by the interesting people that I meet in the most unexpected places.  We just never know about people, do we?  They continue to surprise us.  Today, being a Monday morning, I just couldn't face doing the bus thing to work, so I decided to grab a taxi. The taxi pulled up, I hopped in and the driver turned around and said, "Hi! Nice to see you again."  I said, "Hi, nice to see you again too.  How have you been?"

I had no idea who he was.

Suddenly it occurred to me how supercilious I had been behaving towards this pleasant young man, who was clearly more than just a taxi driver. He had spent the last few months in Thailand setting up an elephant sanctuary.  He told me that he had hired some veterinarians to give each of the animals a complete medical examination.  There were 11 elephants, and one of them was pregnant, so now there would be an even dozen.  He said the land he bought was next to a jungle, and there was plenty of water for the elephants to drink and bathe in.  He said several of the elephants were from different herds, but that they were all getting to know each other. "Did you know," he said, "that elephants have greetings when they meet their friends?" "And did you know," he continued, "that elephants cry, play, and have memories ... like ... well, like elephants?" He said that elephants are very much like human beings in that they reach puberty at around 12 or 13, they can have offspring until they're almost 50, and their lifespan can reach over the age of 70.

I asked the taxi driver if he had given the elephants names, but he said he wanted to get to know them first, because they all have distinct personalities.  He said he is working in Canada long enough to save more money so he can go back to his animal sanctuary in Thailand and visit his elephants, but in the meantime his father is funding the sanctuary.

He said there is too much animal poaching, and beautiful animals like tigers and rhinoceros are being decimated.  Animal parts are sold on the black market, and there is a huge market for them in North America.  I had no idea.  Well at least now there are 11 12 elephants in Thailand that can live out their natural lives, safe from being destroyed.

We meet the most interesting people in the most unusual places.
Posted by Jo at 9:25 PM

Very interesting ,,,,, and he seems to remember you form somewhere and sometime, so you must have made an impression on him too.

Thailand used to have many trained elephants that worked at extracting timber logs but with most of the forests now gone, many of these elephants were discarded and its sanctuaries like these that are taking in the unemployed and homeless jumbos.

Wow. What a great story! Elephants are incredibly intelligent and sociable, and I'm so very happy that some people are able and willing to save wild animals. It has been my lifelong dream to do something like that but life distracted me. Maybe someday...

Heartwarming encounter. Do you now recall when you originally met him Jo, or maybe he mistook you for another passenger? Whatever the case I doubt you'll remember him if you meet him again.
Lovely story. Well told.

Oops, should've said that I doubt you'll FORGET him....

What a fascinating story! This is the kind of tale that reminds me that it's usually a BAD idea to dismiss someone just because of how they look or what kind of job they do (or lord help them, how they vote - heh).

What a charming chance encounter!

You bring out the best in people.

Fabulous story! A chance encounter can turn out to be very important in ones life. It is so interesting when paths cross and eyes are opened.

This is the thing about you, Jo, that does not surprise me in the slightest. You have a chance encounter and have--even in your picture--the kind of open face that invites a person to talk freely. And you meet an elephant rescuer!

I adore elephants, wolves, dolphins and whales, and gorillas. I seem to be drawn to stories about them all. It was wonderful to see this post.

By the way, thanks for your comment and I hope you DO find it in yourself to begin to paint again. It seems to have opened up unexpected doors inside lately for me.

In a TAXI. Unbelievable.

What a great story! That never happens to me! I have to agree with Jeannette...you have an open face that invites people to open up to you as well.

I just LOVE the JO! Love for this planet and her animals... it goes alongggg way...=)

I had to be a dream crusher but, ehm, do you think he might have been telling a little white lie?

Oh I always have the most fascinating conversations in taxis - mostly one sided with the driver doing the talking. This is Cambridge so they are very often educated and well travelled like your friend. I need to start carrying a dictaphone with me... :)

I hate to say this too but I agree with Kimberly and methinks he does not remember you more than the last passenger and this is a great line especially when followed up by the elephants and perhaps you tipped him more or gave him some money for his "sanctuary".

There are about 5000 asian elephants left in all of thailand and about half are domesticated. There are several sanctuaries and all of these are very expensive ventures.

11 elephants is a great number and thais take great care of these expensive animals who all have government ids, dna tests and the whole lot. they are governed by the transportation laws and it is really very difficult now to get a wild elephant to convert into a domestic elephant. this is why there is a dna test since when elephants die, the person does not want to tell anyone and seeks to replace it with a wild elephant. to lose an elephant to a sanctuary would be akin to death i would think.

on the odds, the story is simply too good to be true.

sorry. the old cop in me.

Sometimes chance meetings are the best - as in the case of this animal rescuer posing as a taxi driver!