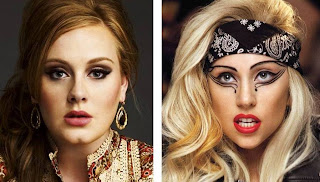 Well, I just know I'm going to get voted off the island for this post. Sometimes my ideas about things are just slightly out of step with pretty much the whole rest of the world, and this is one of those times. Yesterday after work I went for dinner with a friend of mine, and music was playing in the background as we chatted. A song came on that quite literally hurt my ears and gave me an instant headache, accompanied by nausea. There was something about the voice that was actually painful to me.  I asked my friend who that was singing, and she said, "Don't you recognize her? She's everywhere now. That's Adele..."  I had heard Adele singing a couple of her award-winning songs, and I had an awful feeling that somehow I was outside the candy store.  I wanted to like her, but I just didn't.  There was something about the timbre of her voice that to my ears was jarring. Several years ago there was a strange case of a woman who had "a four-year history of recurrent episodes of a feeling of pressure in the head, epigastric distress and mental confusion" and seizures that were "triggered by the voice of a female cohost on a popular television entertainment program." "Systematic testing revealed that the seizures were precipitated only by the voice of the female cohost and not by visual stimulation, emotional anticipation or background music; by other programs with a similar; or by other female voices." That co-host was Mary Hart on Entertainment Tonight. Adele's voice has that effect on me. It actually causes physical pain to my ears.  I wish it didn't; I want to like her.

This morning I was thinking that, somehow, Adele and Lady Gaga's voices got switched, and they were put into the wrong bodies.  Adele is a classic beauty, and Lady Gaga is ... well ... Lady Gaga.  But the difference is, Lady Gaga has an exquisitely beautiful voice, and she sounds natural and not at all forced.  Her voice suits Adele's face, and vice versa.  I think once Lady Gaga gets a bit older, and gets past her "shtick", she is going to become one of the classic singers of her generation. She can sing anything. When Lady Gaga did a duet with Tony Bennett, he later said, "She came in so prepared and so knowledgeable about what to do. She’s as good as Ella Fitzgerald or anybody you want to come up with."

Music for my ears...

Never heard of Adele, not surprising, I don't know much about pop culture. Lady Gaga is sort of an enigma. My wife gets a kick out her. Close your eyes and listen to her in an interview and she is quite level headed and a mature young woman. Open your eyes and you wonder what planet she is from.

Sarah Vaughan (especially with Billy Eckstine) is the voice for me.
So many of the current/newer female vocalists will not be remembered in a few years from now but Sarah V, Ella Fitzgerald and other ladies of the 50s/60s era will still be famous when I'm long gone.

I like Adele's voice, but I know exactly what you mean. Can't agree more about Lady Gaga's voice. She is incredible and I've never seen that video but it made me smile to see Tony Bennett having so much fun. Beautifully filmed, too.

There was a basketball coach at our school who announced his engagement several years ago at one of the trustee dinners. I had had a couple of glasses of wine, which probably gave me the nerve to ask him this: "How can you marry someone with a voice like that?" You see, his wife's voice grated on me like fingernails down a chalk board. He just looked at me and asked me what I meant.

They're still together although I never have to hear her voice anymore. Which suits me fine because frankly, it hurt my head. So believe me, I know what you mean.

I always wanted to like the Beatles, but couldn't.

I don't find her voice grating, but I don't particularly find her appeal. She sure seems to be the hot ticket these days, though. What Sextant said about Lady Gaga is exactly my feelings, too. :-)

I think it is fair enough if you don't like an artist and prefer another and it is perfectly fine to voice that too. I am at the opposite to your preferences and much prefer Adele, I love her voice, her laid back and none diva style personality, but being in the UK I have listened to Adele for sometime. On the other hand I still kind of like Lady Gaga's music (sometimes), but as a person she irritates me.

I love how people associate to music in different ways x

I haven't really ever listened to either lady gaga or adele - I'm always a few years behind the trends. One singer I really like is k.d. lang. Her voice is incredible!
I don't really care about what a singer looks like; for me it's all voice.

As I mentioned to you on F/B, she may not be everyone's cup of tea, but I really like her latest CD. She won 6 Grammys the other night so she's obviously very popular. If I were you, I'd go out with earplugs in my pocket if she gives you that reaction! Then you can quietly enjoy your dinner while your friend across the table can enjoy the music, too. :D We really need to plan an "excellent adventure" when the weather clears up. Yucky rain this weekend! Bah!

Ha, I know what you mean, I get anxious and panicky when I hear most, but not all, Jazz. I feel like I need to scream.
I think Lady Gaga has a beautiful voice,with a big range. She sings effortlessly.
I also like Adele. She has a unique voice and her songs are fun to sing along to.
There is nothing wrong with your opinion, it would be a dull, boring world if we all thought the same.
:-)

I've only heard one song by Adele,(I know, it's shocking) but I liked it. I didn't love it but think she could grow on me, and Lady Gaga is amazing. I resisted listening to her because her appearance turned me off, but when I did I thought she had a really great voice which made me smile.

And let's not forget "Cobie Smulders"..I've only recently become a late-night-devotee of "How I Met Your Mother."

Thank you again, so many, many times for your posts, your artist's pictures that you've embedded and for your stories or growing up on Vancouver Island.

Thank you again. Bec in Austin

I can't stand either of them, but I do like one or two songs from both of them.

The only thing I think is positive about Adele, is her body image, she isn't fat but she is not overly skinny like most of todays female entertainers need to be in order to feel 'pretty' in these days standars.

A good role model to our young girls... while Lady Gaga practically tells them to drink & whore themselves out until they're so gaunt & wrecked, that almost every breath hurts them.

Now get yourself some earplugs to stay alive... ;)

More than a year ago, I came across Adele's CD at a music shop. I had not heard of her before but when I listened to her music, I was certain that she would be a major and unique music find. To me, her voice is special but her songwriting is the highlight for me.

Sorry, that you don't like her singing but I am rather proud to have spotted her before her fame.

Strangely, Lady Gaga is pretty run of the mill for me.

I haven't heard enough of Adele to know, but I agree that Lady Gaga's voice is so natural and beautiful. Really nice voice.

I had to go and listen to several Adele's songs because the only one I know I have heard is Rolling in the Deep and I like it. It's not the best voice in the world, but she sings low enough that she makes me sound good when I sing along. Cher does the same thing and Reba McIntyre. That said, I don't really care much for her voice.

The video you posted of Lady Gaga with Tony Bennett is not one I had seen before and I loved it, so adorable. Gaga can sing and I'm with you...she should drop the silly stuff and just sing. Amazing!

Adeles voice has the opposite affect on me. I love it! I love Lady Gaga too. Both incredible ladies!

You took the words outta my lips. Pretty post!