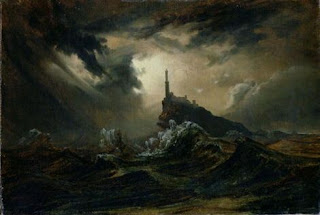 My heart goes out to the parents and family of Abby Sunderland.  She is the teenager who appears to be lost at sea during her attempt to sail solo around the world. According to CNN:

Sunderland's small sailboat was adrift in the middle of the Indian Ocean about 2,000 miles east of Madagascar, 2,000 miles west of Australia and 500 miles north of the French Antarctic Islands, Casher said Thursday afternoon.

The government of Reunion -- a French island -- diverted a fishing boat toward her last known position, but it is not expected to reach the area until Saturday, Casher said. An Australian military ship, more than two days sail away, has also been dispatched, Casher said.

"Friends in Australia have chartered an Airbus jet to fly over the area at sunrise Friday to see if Sunderland's vessel could be spotted from the air, he said.

What were her parents thinking? This girl is 16 years old. That's the age when most kids get their first driver's licence, and their parents sit at home anxiously waiting to hear the car pull into the driveway -- intact.  What parents in their right mind send a 16 year-old girl out onto the oceans of the world alone?  The rescue mission that is taking place right now brings to mind the efforts that were made to find Amelia Earhart.  At this point it doesn't look good.  According to a latest report, from Sail-World.com  "the boat is drifting backwards at around 1 knot. This indicates that no sails are active and that the yacht is not in an upright position."

I'm sure Abby Sunderland was technically proficient in sailing the boat, but at 16 years of age, all sorts of other things come into play.  Teenagers, as mature and independent as they may seem, are not prepared for this sort of a venture.  Does anyone remember seven year-old Jessica Dubroff, who died attempting to become the youngest person to fly an airplane across the United States?  And recently the Dutch government stopped 13 year-old Laura Dekker from sailing solo around the world.  She was quoted as saying, "Since I was 10 years old, I've known that I would like to sail around the world."  Gosh, that would be -- like -- three whole years ago.

Maybe Abby Sunderland will set a record after all.  Maybe she will be the last enfant terrible to be permitted to pull off a self-serving stunt simply in the name of a world record and some sort of notoriety.  And I don't blame Abby, I blame the people who allowed her to do this.  She's 16 -- she should be going to the prom, not lost and alone somewhere in remote and stormy part of the Indian Ocean.  I pray this girl can be found alive, but the chances are looking pretty slim at the moment.  God speed, Abby, wherever you are.

UPDATE:  Miracles do happen.  They found Abby Sunderland stranded in the middle of the Indian Ocean, and a French fishing vessel is going to pick her up.  Now I hope she goes home and waits a few more years before she tries this again.  Be a kid...!
Posted by Jo at 6:48 PM

I think it's horrible and a form of child neglect. Parents are supposed to protect their children...not jump on the 'fame' bandwagon. "Oh sure child of mine, you can try to sail around the world...a feat that has killed many ablebodied seamen" -- to say nothing of a child who hasn't even graduated high school! SICK.

Oh my goodness, I did not know this until I just read this. I would be worried sick. I could never let my kids do this...it would drive me crazy. I pray for her safe return.

I've been watching this story with absolute horror too. An Australian 16-year old circumnavigated the globe successfully, returning home in May, and Abby Sunderland's older brother did so a year ago, at 17. As a parent, I simply cannot imagine it. The Dutch government had more common sense than the parents of that other girl who wanted to sail for a world record with their approval.

I think it's a particularly sick logical conclusion of children everywhere growing up too fast. I hope so much that they find this child alive and bring her home to finish growing up.

Yes, God speed to her. I'm sure her parents are not blaming themselves. This is certainly a scary situation for any person; more so for a teen, alone and in deep trouble by now.

What a frightening situation for everyone. I pray she'll be found soon.

What a terrible thing. One wonders what some parents are thinking ...

I'm hoping that Abby proves to be a resourceful survivor and is found somehow alive. I know that if I had a sixteen-year-old, I wouldn't be allowing her to sail around the world alone.

Our society seems to have become one that values accomplishments over the risks. No wonder common sense isn't common anymore. Nobody teaches it. Instead of setting boundaries for her and being parents, it seems that parents value being friends with their kids more. I see the three and four year olds in my class already dictating to their parents how things are going to be. The fact that this has happened to this young woman doesn't surprise me. What does surprise me is that something like this hasn't already happened.

As a mother I feel it's horrible. As a grandmother I feel it's unthinkable, as a 16 year old I would have thought how can I get them to let me do this...
I'm hoping she is ok but as others have said it doesn't look good.

When she set sail in January, I could not believe the cheers of the public. What on earth were her parents thinking? Do they not watch the news? That UK couple were still being held captive by pirates. I don't care what "dream" this child had, her life should be valued more than accomplishing a dream with such potential consequences. I have no doubt she is a good sailor - she's experienced. Great. So reward her with day trips alone to Catalina. I live in LA - getting on the 405 every day is more dangerous than a quick day sail to Catalina. If she were my daughter I would let her take all the trips she wanted alone or with friends (with permission) around the Los Angeles Coast area. This is the United States - it's unlikely she would be hijacked from here to Catalina, and there are plenty of other boats out daily. But, to let her take off around the world? NO 16 year old is mature enough to handle life-threatening situations. I just pray she makes it home alive - and if not, then I hope it was a quick drowning and not some god awful attack by invaders on her boat. I hope her "dream" is cut short and returns alive; rather than daying in a nightmare. SEND THOSE IDIOT PARENTS TO JAIL! My baby is not going anywhere outside of the US without me until she is an adult. These high school trips for students to roam the earth are ridiculous... Look at Natalee Holloway! Sorry, had to rant - these parents just defy any logical reasoning!

I cannot imagine as a parent, allowing a 16 yr old to do such a thing. Or how I could live with myself if I did. Prayers for Abby annd her family.

I too thought it was pretty ridiculous to let this girl go alone. Just be kids for a while. you'll grow up fast enough. I hate hate hate that I've thought it, but I've also wondered if her disappearance could be some type of publicity stunt.

How sad to read about this! I had only heard what seems like months ago that she wanted to to this, but didn't know she was in the process.

Of course all the news outlets are so focused on the Oil disaster down in the Gulf & that murderer Joran Van Der Sloot. To be honest, I have stopped watching so much news as it is so depressing.

How old is too young? Well 17 is too young in my opinion. At age 16 there is a curfew for teens (so that tells you something). In the U.S. you become a legal adult at age 18 (except you cannot buy or drink alcohol until age 21). Abby's parents should have used their common sense and said NO to this. Once the girl is 18, then she can make decisions for herself.

I'm sure the parents regret it now, but they should have known better and not let this young girl--no matter how mature go out on her own on such a dangerous adventure. Shame on them!

The ocean is a dangerous place and I have way too much respect for the ocean. You need to be so careful out there. I hope she will be found and that she is ok.

Someone has probably already post this, but I see the girl has been found alive and apparently okay. But her boat is seriously damaged.

And it is wrong. Period.

I saw in the news this morning that things turned out okay (I think, anyway). I had wondered when the first girl did this whether it would cause others to try it with bad results. I hope the notoriety of this story does not keep this happening. You're right: the parents must put a stop to this madness.

Thankfully the news today is that the girl is alive and well. I am glad that tomorrow a fishing vessel should be reaching her and towing her to shore. I hope this is the end of these silly child adventures. After reading about this on cnn.com it seems like her adventure, as well as her brother's, is just a case of one- upmanship. This is absurd.

Johanna I love your blog! Seriously, I love the fact that you always post regarding the issues I want to hear about and I'm so glad that this story has a happy ending. Have a wonderful day! :o)

Happy to read from the last few comments that the girl is safe. It would have bee a tragedy for any life to end so early for really no good reason.

By the way, I is blogging again.

I don't know enough about her, her family, her crew, her equipment to evaluate her situation or cast judgement on people I'll never know much about.

I know my parents would never let me do such a thing but I never asked.

This is why they no longer accept "youngest" records.

In a culture that praises adventure and achievements regardless of how beneficial such achievements are, these things will keep happening. There are no mountains left to climb, no wilderness left to discover, so that means people have to find other ideas - like being the first to drive a Volkswagon across the Pacific ocean without food.

Equally, there may be a fine line between common sense and crushing initiative. There is controversy over whether Jessica Watson actually covered enough nautical miles to count as having sailed 'around the world,' but that can also look like pissing on an achievement that is pretty impressive either way.

Age is no barrier to foolhardiness. The navy is always being called upon to rescue some intrepid adventurer whose mast broke, and the current affairs shows still pay to talk to them.