Is Meese The Pleural Of Moose...? 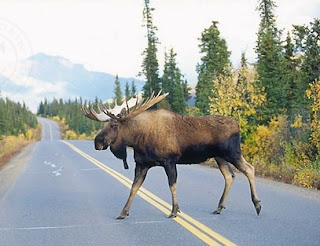 “I knew right away it was a moose,” she said. “I slammed on the brakes with both my feet.” It was like two explosions.”

“My first thought was, ‘Are the moose going out [on a] hunting season for my family?”’ she said. 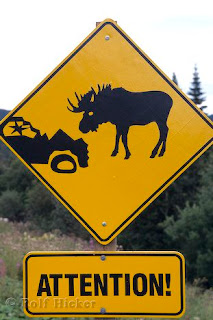 Moose are involved in about 8% of all wildlife vehicle collisions, according to the Wildlife Collision Prevention Program’s website.

“Moose will often try to avoid vehicles by running along a highway,” added Jeff Knight, spokesman for B.C.’s Ministry of Transportation.

“If it’s safe to do so, it’s best to pull over or slow down until the animal leaves the road.”

Both women are okay; I think the meese moose have gone on to greener pastures.

Haha I love this post! I was in Maine last summer and we saw a moose and her twins crossing the road - such amazing creatures.

PS. Thank you for the comment you left on my blog, yesterday was just one of those days but today is already going so much better. I hope your day is going better, stay strong :)

Moose, or deer, (which I guess is the same for either single or plural) are both in abundance this year. We've had some fatalities in our state from the deer. Guess we need to get the guns and hunters out to take care of the problem!

MEESE are hell for Motorcycles...

It's meese, most definitely. Scary. Such synchronicity!

We had a lady die south of here from a deer being flipped over another car and landing in her car....

My husband says even with a big truck it's best to just let the moose have his way...do NOT anger him....
Bad luck for the family, maybe they will have some great luck now?

“My first thought was, ‘Are the moose going out [on a] hunting season for my family?”’ she said.

Sounds like the year that the trees were out to kill celebrities on skis. You don't want to laugh, but you just can't help it!

Thanks for a post that was both fun and a public service.

How funny. I always thought it was 'mi'

Years ago my wife and I saw a moose when we were in Ontario. You'd have thought we were the first people to have ever seen one. It was all my wife could talk about for a while and she began collecting moose figurines and stuffed toys. We even put a big ol' moose decal on the side of our van and nicknamed that van "the Blue Moose".

Lee
Tossing It Out

One of our largest animals is the Kudu and they are often involved in motor vehicle accidents, especially at night. A collision with a Kudu is always very serious and often results in either death or severe injuries.

good grief! what are the chances
of sisters both being hit by "meeses?'

i'm glad they're both ok.

Wow! This is an amazing story, I've never seen moose (is it meese? I certainly have no idea...) in my life and I've always considered them to be such majestic animals. It sounds like they cause quite a bit of damage in Canada though, every car journey must be one exciting adventure :D

I thought it was moosters ???

So how are the moosters doing after getting attacked by those cars while they were peacefully minding their own business ?

Oh my. When we were last in Maine, my children were dying to see a moose - had to settle for skunks and opossum though.

Glad no one was hurt. Were the meese okay??

The poor moose/mooses/meese/MOOSI. (Latin.) They should have been taken to the hospital too, or maybe instead of those stupid people.

There does seem to be a peculiar family karma operating there. Is there a gene for bad driving, do you think?

Over here in some parts of the Eastern Cape's Karoo we have the same problem. Obviously not with meese... I mean moose. Our problem is with kudu, which is quite a big antelope and also does a lot of damage to a vehicle.

We should to carefully driving...ps...if there the moose meat great ?

Jo I have really missed you. This being laid up for months if for the birds or moose or whatever.
Wow what a story. Poor girls I bet they think the Moose are out to get them for sure.
Hope you are doing well
Love
Maggie

ROFL..."Meece"...too funny! But seems whatever you call 'em they are quite a road hazard...Wow!! Huge animals to hit with a vehicle...can't imagine! Have a wonderful weekend! ~Janine XO

And yikes! They got Pleurisy! :)

i can only imagine the chaos of MEESE in hawhyya! LOLOL ! can u see it? lolol =0D

Funny Jo! I just received an e-mail only minutes ago from a friend with a you-tube of baby moose ( meese ) in a sprinkler. Guess it is moose season, hey?

The word 'meese' always reminds me of the Tom & Jerry cartoons when the cat says he loves those "meeses to pieces" !

Back in the day when I was working for the State and auditing schools, a fellow driving a car ahead of me on a country road hit a deer right in its side. Deer kept right on going. Scared this guy half to death. (We were headed out to a little country school, caravan-ing.) He called the authorities when we got to the school to alert them that there may be a wounded animal. Far as we know, the deer made it okay. But the car took a little damage. And then there was the time our schoolbus hit a cow! My brother suffered a couple of broken ribs. Ah, life in the wild. D

This sort of thing never happens in the tropics. Our problem on the open road are speedsters with little or no sense under their hair 'sigh'

Have a lovely weekend Josie!

We had a moose problem in Alaska but I couldn't drive legally so we'll say I never had to worry about it.

How does one not see a Moose in the road??????
My goodness!
They are beautiful and LARGE animals...LOL

I love your sense of humor, Jo :) It's always a treat to visit here!