I have booked the day off work today, just to sort of hang out and "veg" and this morning, while I was having my coffee, I surfed through some of the morning shows. Oh -- my -- Gawd.  After about 90 seconds, I had a headache and I had to turn off the TV. Do women really talk that much? On both "The View" and "Today", all of the women talked non-stop. They talked over each other, they shouted each other down, and they never shut up. Not once.  They didn't have a conversation with each other, they had a competition.  And the other women visibly winced several times during the contest conversation.

Is it just me, or has anyone else noticed that women in general seem to converse this way?  I sit next to a boardroom in my office, and I hear groups of men having conversations.  One will speak, and then the other will speak, and their voices are modulated, calm and respectful.  When I hear groups of women in there, it doesn't take long before they start to sound shrill.  I enjoy hearing the men's voices; the women's voices give me a headache.

I have sat next to a table of women in a restaurant, and I feel as if I'm sitting next to a group of auctioneers, all trying to outdo each other. 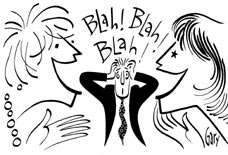 This is by no means a scientific observation, merely anecdotal, and is not meant to be sexist -- it's merely an observation..  I don't dislike women, some of my best friends are women.  I happen to be one myself.  But, I am curious -- is there some biological, sociological or anthropological reason for the way groups of women communicate when they are together?  I love Whoopi Goldberg, and I love Joy Behar -- just not together in the same room.
Posted by Jo at 10:00 AM

I must say, I have overheard groups of women talking, and you're right - the conversation does tend to be rather loud and disorderly. Then again, I have also heard equally raucous male conversations. So, I don't think it's anything scientific, I suppose it just depends on the people (male or female) and the type of group they're in.

Based on my very scientific observations of clusters of people outside my window at work I think that both sexes have the ability to be loud & talk over each other. The difference is that women's high pitched voices tend to be MUCH more annoying than the men's voices. I include my own voice in that - I'm always disappointed when I hear a recording & realize that I don't have a deep smoky voice. Sigh.

Based on recent observations of people in restaurants and walking on the street, I believe that men are just as likely to be overbearing and rude as women, although I have also noticed that women's voices seem to have become more harsh and shrill. Many young women, especially, have unpleasant voices and I have no idea why. Maybe they are imitating pop stars, consciously or not, but I often step aside and let them pass me on the sidewalk so i won't have to listen to them.

I love Whoopi and Joy too. I used a Whoop quote this week :)

But you give me much to think on. Listening is a powerful magic I'm just now learning.

If I were going to overgeneralise and stereotype half the people on the planet I'd say men can be pretty rambunctious sometimes.

If online comments were audio who do you think would be the loudest?

But those TV shows are a competition. They don't get ratings by having calm conversations. People who watch those shows would think that's boring.

I'm with you on this one, Jo. I find I have to turn the volume way down with most talk shows where the women are the majority.

Then too, all the sports shows with the guys are often too loud.

The commercials are always much louder than the programming.

I'm not much of a TV person anyway, and I agree that the shrill voices seem to be competing for dominance.

Try those darned shows that feature Nancy Grace or the news channels who have opinions to offer - they all are loud; interrupt each other - it teaches bad manners, I think.

HeartinSanFrancisco's point is interesting. Recently I've heard a couple of people say that young women's voices are different than ours were at the same age. My mother says they sound like little girls' voices, only much louder.

I'm with The Bug. I think I have a decent voice until I hear a recording and shudder because I can be as shrill as the best of 'em.

I think you're on to something Jo. My husband loves to watch the Los Angeles news in the morning (we live in far Norther CA, so right there is a conundrum). It's hosted by one male and two "chicks" - they are loud,overbearing and bordering on obnoxious, but I have to admit they're funny most of the time. I notice also a general "cackling" in restaurants frequented by women at lunch. There doesn't seem to be much of an effort to be "ladylike" anymore.

There's no doubt in my mind that women love to talk a great deal more than men. The thing that gets to me is the way some women seem to want to get their tuppence-worth in all the time!

Jumping in and ignoring the one who's already speaking is one of the most impolite and annoying traits in women.

The higher pitch of the voice can also be somewhat grating, or so it seems to me.

Maybe young girls are not told about "inside" versus "outside" voices? I don't know, because I'd rather have a root canal than watch a talk show! Okay, that might be a slight exaggeration. But only slight.

I have observed younger women feeling pressure to compete with men and with each other, and raising one's voice is just a symptom.

Of course, television is setting a bad example.

i am totally with you on this one. headache!

it's how i feel listening to news debates, too,
though. they just holler over each other.

Here's a thought-is it possible that all these women are so excited about the opportunity to talk to someone who might actually possibly think about the idea of listening to them (as opposed to their spouses and children) that they simply cannot contain themselves?

I have noticed that there are talkers and there are listeners, and the talkers rarely notice when they have abominable manners. Which simply means one shouldn't bother pointing out that they've interrupted as they wouldn't hear you anyway.

Both sexes can have overbearing, interrupting, unpleasant voices.
Ever watch McLaughlin Group?
I rest my case.

I think it depends on the group...I find that there are certain people that I can have a conversation with and it is rather quiet but I have other friends who when I talk with them it is rather rambunctious and loud. I think the same runs true for the men.

Have you ever seen Bill O'Reilly on FOX News? He talks over his guests and they all talk at once. My husband watches it and it drives me crazy.

I had to quit watching The View for just that reason, although Whoopi is not the worst. They are all loud, brassy and attention-whores.

Jo, yes we do talk that much!! But your descriptio of men isn't exactly accurate! I have seen men shout and talk down each other in meetings too.
But maybe women are more conspicuous when they are loud?

I think you are soooo right. Sometimes I hear Mec talking to her friends on the phone and I swear only dolphins can hear that noise!! :0)

Any Idiot Can said...

That's why, when I go out for dinner, I usually only go with one female friend and not a group. The noise level in a group is awful and nobody is listening to anyone :)

I've noticed the same thing - women talking OVER each other - not listening or waiting their turn. I think it has something to do with character structure. It drives me crazy because I can't hear either person clearly.

I've noticed that just as much with men as I have women, speaking at an unnecessarily loud volume. I've also noticed that people talk over each other as a matter of course.

Me, I'm practically a hermit and enjoy quiet a great deal. Our neighbors keep commenting that we're such a quiet family and I really don't think that's it. We talk to each other, in fact, we're all three of us quite wordy and prone to telling each other stories.

I just think the family that lived here before was exceptionally boisterous. Anyway, I'm outlining this for a reason: That family was two boys, a husband, and a wife. The boys had their male friends over every weekend. The husband evidently liked to invite his fellow (and predominantly male) engineers over a great deal.

I don't think it's gender specific. I think it's that people tend to socialize in groups, rather than one on one. I prefer one on one, which means that one person speaks, the other listens, then speaks. It's the group dynamic that tends to bring out the hollering.

As for work meetings, chances are good that nearly everyone in those, male or female is half dead from boredom, hence the subdued vibe.