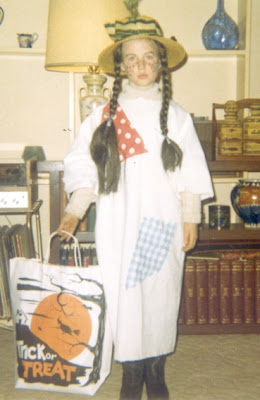 Today is Mac's birthday, and this is her in one of my mother's many Halloween costumes.  In this picture Mac looks as if she's saying "What is this getup you've gotten me into?  Do I have to wear it?  It's scratchy..."  My mother used to love making Halloween costumes, and Mac has inherited that talent as well, along with many of my mother's talents, including her intelligence.  Some people are born with a big personality, and both Mac and my mother have that in common, along with their sense of humour.  When Mac was about 15, she had a friend who also had a larger-than-life personality.  One night I was out for a few hours, and as I was coming home from my evening out, I could hear Mac and her friend laughing from two blocks away.  Laughter like that is a gift, and fortunately both Mac's children have that gift of laughter too.

Mac is one of those unique people who does not realize she is unique, but my mother recognized that she was, and so did our Shaughnessy matron friend Janey.  And a few people, including Mac's cousin and a couple of her friends, have told me that they were inspired by Mac to go back to school to get their university degrees because they admired her success.  Of course, Mac would never believe that if you told her. Oh, and come to think of it, I think there may be one other person she has inspired to go back to school too.

When Mac was about nine months old, my friends used to come over to visit, but it wasn't me they were visiting, it was Mac.  At that age Mac was already walking, and she used to have long, animated, philosophical conversations with the walls.  She had learned to imitate perfectly the vocal expressions and gestures of adults.  She would ask the wall a question, and wait patiently, listening thoughtfully while it answered, and then she would come back with a lengthy retort, complete with head and hand gestures.  It was hysterical, and I could have charged admission to all my friends who came over to watch.  My friend Andrea still laughs about it whenever she and I get together.

Always keep laughing and having fun...  Life is not meant to be taken too seriously, but to be enjoyed.

Happy Birthday Mac! from me too.

Oh my kid used to do that too all the time and I for one found it scary. Talk to the walls I mean and patiently wait for an answer. She used to hv lengthy conversations there..she had a fave corner too for that.

I for one was very scared of that. She started as soon as she could walk and did it for a couple of years and then stopped.

I wish you a happy day and hope you take time to enjoy it.

One of my favorite lines is from a movie that takes place in my home state of Iowa - The Music Man.

Professor Harold Hill is attempting to convince Marion to meet him down at the foot bridge. She is saying maybe she would meet him there tomorrow.

He says "Oh, my dear little librarian. You pile up enough tomorrows, and you'll find you are left with nothing but a lot of empty yesterdays."

Delightful post! Don't we all talk to walls? (We just don't wait for answers...)

I think I've told you before that I read Lucy Maud Montgomery's journals and the biography by the editor of the journals. LMM used to have long conversations with the little girl she saw reflected in the china cabinet. She gave her a name, and told stories about her, and conversed for hours.

A Canadian tradition lived on :-) I hope you have a lovely day and get to see each other soon.

Happy Birthday, Mac. I hope you have a wonderful, fun-filled, fantastic day!

Yes, happy birthday to Mac. And thank you for the lovely thoughtful post. Sometimes I wonder if people's genes are the cause of these behaviors, because they sure do seem to run in families. Talking to the walls, indeed! I think they were answering her, and she politely listened.

I didn't miss your sly reference to going back to school - or did I misread it? :)

Happy birthday Mac! What a wonderful truth, to be blessed with friends and laughter. And I do love that picture.

Happy birthday Mac.. The fact that you have such a remarkable daughter says a lot about you.

Congrats to you both.

Kids have a way of making us better people and Laughter is the best medicine.. double blessings

And she is so cute in that photo. Love it!

How lovely to have your daughter share your mother's traits, one generation revealed in another, life chain kept going.
Happy Day to her, and to you.

Your closing message is beautiful, wise and so true. Mac sounds like a wonderful person, I wish her a happy, happy birthday!

Jo, I loved the way you described Mac in this post - so honest and loving. Happy Birthday Mac!

Wishes for a Happy Birthday filled with love, laughter and joy!

Happy Birthday from Athens, Greece - may life and time continue to treat you all kind.

Yesterday I met one of my son’s co-workers, who said that he knew instantly who I was without being introduced. The facial resemblance is not close, but it was everything else-how I spoke, gestured, and walked—that tipped him off.

It’s a cliché that children are both incredible blessings and burdens, but another benefit we don’t often discuss is how child-rearing teaches us about ourselves, and not just in the can-I-multitask sense. We watch our infant wrinkle her nose or tug her ear or chuckle, and the epiphany occurs. Dad and I did that the same way.

If one of the purposes of life is to examine it, there are few better ways than to peer at the mirrors who are our parents and children. Their birthdays, and yes, ours too, are cause for celebration.

what a wonderful expose of your darling
daughter. i feel as if she is already a
friend, especially dressed as dorothy.

i bet you have so much fun with her!

Happy Birthday Mac! The birthday of Mac is in the emancipation of México, September 16. Viva Mac!!! Viva México!!! :D

Happy Birthday Mac!! What a wonderful tribute to your lovely daughter. And happy birth day to her mother.

Happy Birthday Mac...what a wonderful tribute to your Mom and Sister. Great post...

What I want to know, who did you get your writing and artisitc talents from? You are incredible. I marvel at the wide variety of subject matter you discuss and add your personal touch to. I still say you could easily do a daily column. You are one talented lady!

Happy Birthday to Mac,and to you because of her.

Happy Birthday to Mac! She sounds like quite a fun person! The apple doesn't fall far from the tree! Cheers!

Thank you, everyone, for your birthday wishes to Mac. I may print this so she can read them. :-)

A most happy birthday to your delightful and glorious Mac, and to the Mama who made her.

I hope she has a wonderful year with much joy and laughter.