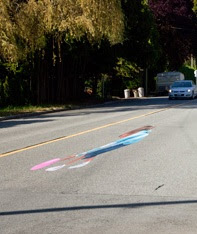 The City of West Vancouver has come up with a new way to keep drivers alert while driving past École Pauline Johnson Elementary School. Instead of speed bumps on the road, there are elongated drawings of a child chasing after a ball. As the driver approaches the drawing from about 100 feet, the figure rises up from the ground, appearing to be a real child, and the driver is forced to slow down or stop. Police will be monitoring the illusion's effects for the next couple of weeks. 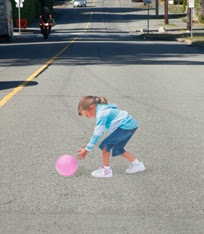 The recommended speed limit through school areas is 30 kilometers per hour, but too many people exceed that limit. So the BCAA Traffic Safety Foundation is using this method to create a public awareness of how quickly children can dart in front of a car. According to David Duane of the BCAA, “It’s a static image. If a driver can’t respond to this appropriately, that person shouldn’t be driving….”

I think it's a fabulous idea. Every year 2,600 people are injured in pedestrian/motor vehicle accidents in B.C. The fault is not always with the driver, though. I have seen pedestrians do some really stupid things, including walking across an unmarked intersection in the dark, talking on the phone or texting. The other day I saw a woman run across four lanes of traffic, in the middle of the road, to try to catch a bus. She caused a fender-bender, but as she hopped on her bus and rode away she was completely oblivious to what she had done. Children are a whole other matter, though, and no matter how much they are taught, "Stop, look and listen..." they still make mistakes. So, please, slow down through school zones.
Posted by Jo at 8:34 AM

We have such a problem with speeding drivers on our little residential street, my neighbor suggested we start throwing child sized dummys at the cars!

That illusion is so cool! Sad thing tho, once the regular drivers see them a few times they will be back up to their old tricks. And might not respond if they happen to see a REAL child in the road. A bit of 'crying wolf' I think.

Wow! That is a clever, clever idea, indeed.

I wonder if seeing the illusion will make a person stop, or if as Teri says, they get so used to it they might not respond to a real child. A dilemma to be carefully watched. Drivers should stop anyway, but this child won't move out of the way, ever! :-)

What a novel idea. I'll be interested in hearing how it works.

Pedestrians drive me crazy. I never cross a street--even last summer when I lived in the Berkeley, CA, area, where the pedestrian is king--without stopping and looking. I mean, it's a car, folks. It can kill you! Do people really think all drivers are paying enough attention not to run them down?

What a marvellous idea! We could really use these in my city, where accidents are numerous and careless driving is rife. Especially in school zones...I am astonished every time I see a motorist zooming right past a school at a ridiculous and unnecessary speed. Such foolishness, which can and often does lead to devastation.

The illusions are an ingenious and creative idea, and possibly an effective solution. I really like how art is helping tackle problems in modern day society :)

I think this is a wonderful idea!! I wish the USA would pick up on this!!

I'm interested in the outcome. Easily distracted that I usually be, I would probably slow down alright, but with my focus now on Art Appreciation, instead of on the child I would still be "taking out," only at a slower speed. (I dunno, is there less bruising with reduced miles per hour?) Undoubtably, it would be a much safer world if I would just surrender my driver's license immediately after I put a period on this sentence

Great idea. I love how that works. I hope that it helps. I don't know why people always have to be in such a hurry when they are driving!

Much respect upon this idea ! What a role model. At the same time, have to admit, that it might indeed be "unthinkable" over here. What great minds must have thought about this. Am most impressed !

brilliant idea! the image looks very
real, at least on the screen.

i can remember being a kid and
thinking, "why does everybody get
so careful when school is back in
session? we're all in school!" :)

This is a good idea, tho i bet it would give me a heart attack. I've had several incidents with pedestrians or bicyclists doing very stupid (& often illegal) things. I try to be very wary, but folks sometimes pop out of nowhere!

I do think if i traveled that street often, i would get used to it eventually. However, i still try to drive defensively & anticipate the actions of other on the road or nearby.

Thanks for sharing this Jo.

Wonderful idea! I wish every school zone would install such an optical illusion. It's really brilliant.

It's certainly more fun, and more eye-catching than any sign!

That is an interesting idea, I wonder how it will work out? I can easily see it improving things tremendously or unfortunately having drivers becomes less aware of people in the street :-/ Difficult to say, it's just as soon as anyone who travels through that area becomes used to the illustrations, do they become more, or less cautious? "It's just a drawing" might not be the best thing going forward, you know?

However, it's an ingenious way of dealing with a problem, and I hope it works. I don't think we could ever get away with doing something like that here. All it would take would be one person being startled enough to swerve into a parked car/other car/other lane and there would be lawsuits about "emotional distress".

It's the teenagers with cars on campus that speed in our school designated areas. There are police cars parked at different spots each day to catch them. Maybe I'll suggest the child illusion thing and see where it goes.

I wonder if this would slow down the fools who drive 50 miles per hour down my residential street which suddenly over the past two years has about twenty kids 5 or under living on it.

Fabulous. There is a street artist that does these kinds of 3-D elongated things. I can't remember his website but they are terrific. I hope the drivers slow down enough not to hit the photographers in the road taking pictures of it.

It's certainly an inventive idea. I fear for the consuquences though. What if it works out like the boy who cried wolf? What if people start to say, "oh it's just one of those illusions" and at some time it's not illusion? I see someone else noted that too.

The idea is a unique one, and clearly well intended. What worries me is that perhaps a driver might react to the faux image and actually hit a real child as a result.

That is an absolutely brilliant idea! Oh, I wish we had it here in the States!

This is such a brilliant idea! Anything to make picking your children up from school safer. I just nursed a 12-year-old boy who passed away after being hit by a car on his way home from school. It is so so so important to be careful.

Thumbs up for this innovative idea. Perhaps they could do something for squirrels too.

It is scary how people can drive around schools with no regard for kids.

I have seen these kind of paintings on the internet and have to say that they are so "real".

Its a great idea but hopefully it doesnt backfire. It is going to be obvious pretty soon that its an illusion and then God forbid if the drivers commit a mistake then..

Oh should be positive..out with the negative thoughts.

What a great blog!

Have a nice time!
Paula

I hope it works. Keep us posted.

I wonder if speeding in school zones would decrease if there were graver consequences? Higher fines or license restrictions, for example. I'm tired of watching cars fly by in my neighborhood, too. It's so bad that I've had to watch out for the speeding school bus!