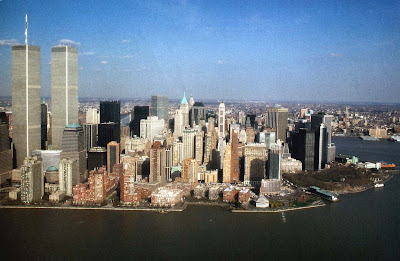 My goodness, what is there left to say when it has all been said, and much better than I could say it? When we were in New York, my daughter and I visited the World Trade Centers, and it's difficult to describe how gigantic they were. They were massive. And the streets all around that area are so narrow -- barely wider than the ox trails they were originally when Manhattan was first a Dutch colony.  So, all I could think when the towers fell was , "Where on earth is all that material going to go?"  There was nowhere for it to go except out.  Everything ~~ everything ~~ was pulverized into powder that floated everywhere.  Of a total of 2,976 people who died, only 300 bodies were recovered.  That leaves 2,676 people who were part of the debris scattered literally for miles.  Even though it has been nine years, I still feel shock and horror when I think about it.  For 2,676 people, Lower Manhattan is their final resting place, and yet there is no memorial to them, not even a slab of cement with their names on it.  They were just regular folks who had breakfast one morning, said goodbye to their families, and went to work...

"May flights of angels sing thee to thy rest."

Amen.
All of my family is from Brooklyn. My brother was back there visitng family and showing off his newborn daughter. He and his wife and baby were headed into Manhattan...she had previously worked in one of the towers and they were heading in there to visit her friends and family. They were on the bridge when it happened...witnessed everything. They were safe but they are broken.

"May flights of angels sing thee to thy rest" is so beautiful.

As a New Yorker and an American, I begin to feel an emotional heaviness and great trepidation as this anniversary approaches. I will feel better when it's behind us for another year.

The world is filled with so much pain that it sometimes seems unbearable.

"They were just regular folks who had breakfast one morning, said goodbyes to their families, and went to work..." Thank-you Jo for this post.

May we never forget.

The memorial is scheduled to be done for the 10 year anniversary.

Every year it makes me stop and think as well all hurry and scurry in our busy lives leaving the front door in a whisk and saying goodbye. It makes you say...how terrible...what if it were your last goodbye. It makes us all appreciate our loved ones, family and friends just a bit more. My heart still aches when I think about it. Nice post.

You said it so well, Jo. I have been reading my regular blogs this morning, and every one has been either no words but a picture, or something like this one of yours.

Our hearts are filled with sadness today, and I suppose it will be reflected all around me as I go through my day, remembering the world we once had, our innocence.

The horror and sadness was experienced all around the world and I have already said all I have to say on this ninth anniversary of the event, on my blog very early this morning, but forget?... never.

Yes, just normal people, innocents...who left their homes and never returned. The tragedy of it is incomprehensible. A poignant and timely post, Jo. May they all rest in peace.

When our President said yesterday that the terrorists who we fight have killed more Muslims in the world than any other group of people, perhaps we should buck up but I still feel grief. I also think I should give my condolences to the people the terrorists killed around the world.

Beautiful post and beautiful hymn...it is just so sad, I feel like my heart is breaking. I can remember it so vividly. I worked for the federal courts in Riverside at the time. I had just turned off my alarm on the clock radio. It was all over the news about a plane crashing into one of the twin towers. I turned on the TV to see a reply of the plane hitting the tower, and then shortly after, the entire world, as we knew it, changed. God Bless us all, because we are all involved. I do not understand the hate behind such an action.

I cry to remember it!!! Thank you for this lovely tribute, Jo!! It is such a sad anniversary. I will never forget. Love, Janine OX

Nobody ever raises one aspect of this tragedy - just how shoddy was the structure of the Twin Towers for them to crumple in 10 seconds? I can't imagine the Empire State Building disintegrating like that.