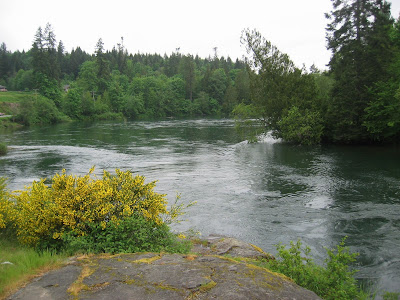 When I was a child, some of my first and happiest memories were of my father teaching me to swim in the Somass River in Port Alberni. I loved the river, the smell of the river and the way the branches of the trees dangled in the water like lazy fingers.  My father first taught me to dog paddle, and then to do what was called the Australian Crawl.  But my favorite thing was just to drift on an inner tube and listen to the sound of the water. 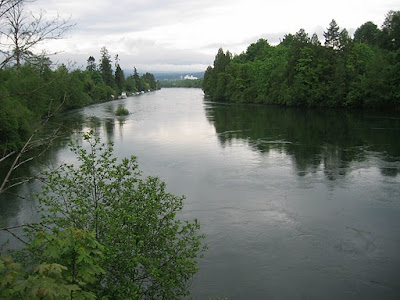 Our favourite spot on the river was a place called River Road Park, where my father and I used to go on Sunday afternoons in the summer. My mother would pack a picnic lunch of lettuce and tomato sandwiches, potato and egg salad, and fruit, and my father and I would get orange crush and ice cream from the store across the road from the park.  After we ate our lunch we would sit on the grass on the banks of the river, and spend long, lazy afternoons discussing all the deep, philosophical things a four year-old can discuss only with her father -- like, why do men have whiskers and ladies don't... 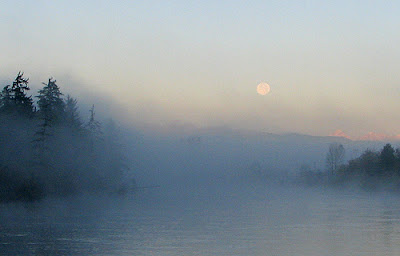 I particularly love rivers, and there is a rivers' conservationist here in British Columbia, Mark Angelo,  who started BC Rivers Day in 1980 as a way to bring awareness to the fragility of rivers.  The event has grown, and now the last Sunday of every September is World Rivers Day, which has been endorsed by the United Nations. 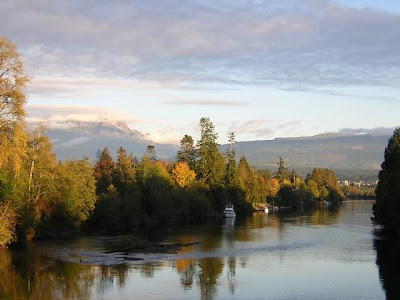 Established in 2005, World Rivers Day is part of the United Nations Water For Life Decade and the the International Network on Water, Environment, and Health. 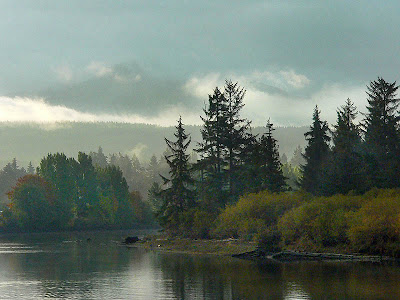 These are all pictures of the beautiful Somass River in Port Alberni.  When I go home to Port Alberni, the first place I go is to the river.  For me, it's a living thing, an entity that is an important part of my life.  Each river has its own spirit.  Rivers and lakes are what nourish us and keep us alive.  We owe it to them to keep them alive as well, not just on World Rivers Day, but every day.
Posted by Jo at 9:46 PM

That is a beautiful river Jo, there is something completely peaceful about them isn't there?

Jo, I love your photos in this post - and the sentiment really struck a chord. I grew up in San Francisco and spent summers at Tomales Bay, north of the City. So I knew salt water, sailing, swimming in the cold fog etc. When I married and we moved north to Redding, I became acquainted with the Sacramento River which runs right through the center of the city. It's become the body of water I can relate to on a regular, usually daily basis.

Have you ever seen the movie, A River Runs Through It? I believe it was produced in the early 90's and was directed by Robert Redford. I remember it reinforcing my relatively new positive relationship with rivers.

Simply stunning, Jo. Thank you so much for sharing these pics. So very beautiful.

I have always liked rivers because they connect places with each other, and because eventually, they all find the sea. And also because water in any form is far more interesting to me than dry land.

What a fantastic place, so nice! =D

Nice photos Jo. I love the stories that go with them as well. We are all united in the sentiment of keeping our rivers and lakes clean and alive.

You can come over to my blog for an aerial view of my Heavenly Belize.

What beautiful pictures! We didn't grow up by a river, but we did have a ditch behind the houses across the street. I think we soaked our feet in it, but mom would give us you know what if she found us there.

Have a great day!

I imagine that you took each of those pictures. I love the misty one with the sun shining through. But then again, they are all wonderful. Water is life, and rivers of water are rivers of life, not just to people, but so many creatures depend on clean water. BTW, I love the daisy and cranberry glass picture on the sidebar, I think it's new!

I grew up not too far from the Arkansas river and we fished along it and did various things. There were more "creeks" and I spent more time along those. I love them too, especially in the morning

Beautiful. If I ever find my self up there (hopefully, sooner rather than later) I will have to make Port Alberni one of my stops.

I agree that rivers are living things and indeed beautiful things. You have some great Canadian rivers. Keep them wild and alive.

That's a gorgeous place! It's easy to see why you love it. And I had never heard of World Rivers Day before. I also love rivers and lakes. And we do have some beautiful ones in Tennessee.

It sounds like you had a wonderful relationship with your father.

Beautiful photos Jo, and making me homesick for the Alberni Valley. You must know friends and relatives of mine who also lived by the Somass river.

dear jo
i haven't stopped by in awhile
but what a blessing to stumble into such a lovely post..
i love your images and i love how take a publc/impersonal event and weave your personal memories around it...and always create the most beautiful stories...
you are a writer!
i love how you shared your father's whiskers, your mom's potato salad...and your own sweet memories...

these are great images... I can imagine what it smells like out there where you learned how to swim

What a beautiful river Jo. I can see why this is a special spot for you. Thank you for sharing such a sweet remembrance. Water is life.

Thank you for this journey into the Good and Beautiful.

Please have a wonderful Tuesday.

Oh, simply gorgeous, Jo!!!! AND that photo of the mist rising off the river?? National Geographic, dear friend!!!! I think they need to hear from you :-))) A wonderful post!! We need to treasure all the beauty around us!!! ~Janine XO

I grew up in a town with 2 main rivers and several more within 20 miles each way. I love watching a river; the moving water is so calming.

I also loved swimming in Port Alberni. My mom would take my sister and I to China Creek and while everybody was off fishing my sister and I would jump off rocks and dive into the freezing cold river. I will never forget that type of cold, but we all loved it. :o)

Beatiful snaps Jo, and a nice post.
The river Yamuna flows through Delhi, but since my childhood I used to go to my nana's (maternal grandparents) and it used to be there in its full glory..I love this river, but it dissapears and is mere sludge, by the time it reaches Delhi from Himachal Pradesh..except for the deluge nowadays. Despite the danger its looking beautiful -or at least like a river.

Such very stunning photos Jo! and I love your reminiscence of childhood and how lovely it was and what a special way to learn to swim! A memory that will never leave you I feel. Hope you are keeping well and all best wishes come your way from us here in the UK

What a treasure you have! We have a local river, too, but it's not nearly that pretty. Thanks for sharing the memories and the pictures.

I loved the description of your picnic fare, Jo :-) My dad was a big fan of the tomato sandwich, also. Good tomato, good bread? Doesn't get any better.

The rivers in BC are certainly worth preserving, they're stunning. Aren't they also harnessed to help generate electric power? That was my understanding, so they're of great benefit even beyond being so beautiful.

By the way, have you ever seen the movie The Great Mouse Detective? In it Sherlock Holmes is a Mouse, very cute movie. Well, Watson is in it too and he sports a mustache. My son asked me, at the age of eight if that meant all of the other mice in the movie had to shave.

I was a little stumped.

I am just seeing this! What a GREAT post! This is beautiful country!!

One of my very favorite movies is A River Runs Through It. I like the movie because of the scenery. Likewise, I like another Redford directed movie called An Unfinished Life because, again, I like the scenery.

These images remind me a great deal of the scenes in that movie. You are very lucky to have grown up in such an area!!

Beautiful post Jo. We of course have the Kern River which is beautiful but at times dangerous. People forget the currents running below the peaceful top water. I also lived right on the Colorado River in Parker, Arizona as a child and I loved weekends and boating and swimming.

How special the wonderful memories you have of just you and your dad Jo.

Gorgeous photos and lovely story about your childhood on the river. I grew up on the Vermilion Bayou, (which is the Cajun word for river) and just love everything about rivers. Loved your picnic description, too!