For All The Starving Children... 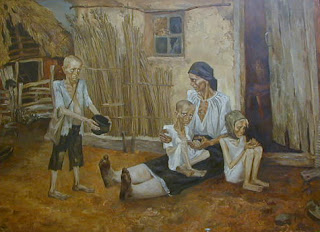 All of us at one time or another when we were children, heard our parents say "Eat all your food; there are children around the world who are starving..." And of course, as children, it meant absolutely nothing to us. Starving children were inconceivable. We had three meals a day plus snacks. Food was plentiful. Today we are a nation of overfed people, with McDonald's, Burger King, KFC, Wendy's, and the ubiquitous Starbucks on every corner. On television, there are three main advertisers -- automobiles, food and medicine.

The other night I watched a program on "American Experience" about one of the several famines that happened in Russia during the 20th Century.  Millions of people starved to death, and as I watched the program, it was an eye-opener for me.  There really were starving children in other parts of the world.  In North America, eating has become a hobby.  We don't eat to live, we live to eat.  Food is no longer for nourishment, it is for fun.  At work, we are inundated with co-workers bringing in chocolates, doughnuts, cakes, pies, cookies...  Every day we have snack food and every day we work hard sit at our desks and nibble on snacks.  It occurred to me, when I watched "American Experience" that the plethora of food we have available to us in North America is almost obscene.  What would these people think if they could see it?  It would be beyond the realm of their imaginations.

It is no coincidence that the Nestlé Corporation, one of the largest manufacturers of junk food, is also the owner of the Jenny Craig weight management program. Or that Weight Watchers, another weight management program, was owned by the Heinz corporation, also a manufacturer of junk food. That's good business; fatten people up and then help them to lose the weight. It's a treadmill that millions of folks can't seem to escape, and I am as guilty as anyone.

The formula for losing weight is easy:  3,500 calories equals one pound.  Cut back on the calories, or expend them as energy, and the body will lose weight.  It is the simple principle behind any weight loss program, including Jenny Craig and Weight Watchers, with their packaged, artificial, processed food and complicated points formulas.

Yesterday at work one of our patients brought in a huge box of Tim Horton doughnuts for our staff.  As I looked through the doughnuts to see which one I wanted, I thought of how one of those doughnuts may have kept a Russian famine victim alive for just one more day.

My parents' advice about cleaning my plate because of "all the starving children" was well-meant, but ultimately bad advice which led to bad habits.  Because of those starving children, I am going to be very careful from now on about eating without thinking about it first ... well, starting right after Easter dinner.  ;-)
Posted by Jo at 10:18 AM

Well said Jo! I'm going to add that last thought to my arsenal in the Bug's Battle of the Bulge!

We have lost:
sleep when tired,
eat when hungry,
etc.

Sounds simple, but we are estranged from our nature for others' profit...

With wishes for you to enjoy family/friends on this spring-time weekend!!!

Are we still gonna have our British scones at the wedding? lol

My mom never talked about the starving children, she said, You're luck you have beef and chicken. I lived throutht he depression and all we ate was beans.

By the way I like beans and bean soup.

I also heard about the starving children when I was growing up. You are right that it's embarrassing how much we focus on food, either getting it or getting rid of the effects. Very interesting information here, Jo. Hope you have a really nice Easter feast, however. :-)

Heinz makes ketchup -- that's not junk food in my book! (Actually, seriously, ketchup is supposed to be good for you; just don't eat it on French fries.)

But I agree, the amount of food we throw down the garbage disposal, or just in the garbage, is obscene. We should clean our plates ... but not put so much on them to begin with. And then there might be more food left in the stores for the poor and the hungry.

With the prices on everything going up, I don't see how anyone can eat a lot of junk food! Or maybe it's cheaper than the good stuff??

Here, we buy very little junk food/processed food. Mostly meat and fresh fruits and vegetables. No leftovers either, we have dogs for those!!

Have a happy Easter!!

Unfortunately for those strapped for cash, the non nutritious junk food is far cheaper than the healthy perishables. I am going through my own bit of work on mindless eating-it's been shocking to me to realize how much I consume opposed to how much I actually need.

I agree that the clean your plate method was a bit detrimental to everyone's eating habits; it certainly was to mine!

You are so right! My parents used that tired litany on me, too, but when I suggested that they send those starving children in Europe my dinner, they thought I was being sassy when I thought I was cleverly solving everyone's problem.

I know many people who eat for entertainment, and it always makes me cringe. I think that moderation is a good rule to follow where food is concerned.

I am not familiar with the TV show you mentioned. But I am acutely aware of the history and political circumstances surrounding those Russian famines. They were a direct result of communist economy and the totalitarian dictatorship that were in place in the Soviet Union. Famine and Starvation are common events in socialist collective societies. That's why the hippies all went back home.

I read somewhere that N. America manufactures roughly 3,800 calories of food per person per day. Considering the impoverished and homeless who do not get their share, we can imagine the others who get more than theirs.

I'm battling weight again as a result of medications, and it's quite frustrating. Yes, exercise will have to be ramped up, though that is difficult with the health problems. But I, too, had parents who told me to clean my plate. I'm working hard to halve everything I eat, saving some for later, and to make healthier choices. I don't eat fast food (except pizza, which I am quitting, too), but I love sweets.

Speaking of - have you seen Daryl's blog today? Sinful!

Wish I'd seen that program. I usually love American Experience. Good for you, for taking it to heart. I'm a guilty party of the obese epidemic. Have always had a sweet tooth. Ugh... gotta remember those starving children!

P.S. Minnesota attracts a lot of refugee populations, and I feel embarrassed when they see our eating habits. To some of them throwing away food is an obscenity! And we are so cavalier about it all.

Nice blog. Please do visit my blog and leave your footprints behind by posting comments:-

Indeed, I live in Africa so hungry children always in the eye...despite us being poor as kids, I never went hungry...something to think about...