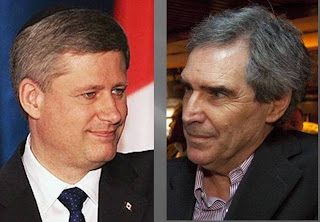 When I was in grade 12, we had a debate as to whether, in an election, we would vote for the man or the party. The premise was, if the right man were running for the wrong party, would we vote for the man or the party? Or alternatively, what if the wrong man were running for the right party? Of course, the definition of right or wrong would depend on where the individual stands.  If one is left-leaning, then that is the right party; or if one is right-leaning, then the left party is the wrong party.  Confused?  The conclusion I reached after the debate was that I would vote for the person, not the party.  The candidate who heads the party is ultimately responsible for setting the tone.

On May 2nd, exactly one month from today, Canada faces a federal election, and the two main candidates are these two men pictured here.  The man on the left is our current Prime Minister, Stephen Harper, the head of the Conservative party.  Folks in Canada love to hate Stephen Harper because he is a staunch conservative, but they keep electing him.  He has been Prime Minister twice (39th and 40th) and I predict he will be the 41st -- with a majority.  He is the very definition of conservative, and he makes no apologies for it.

The man on the right is Michael Ignatieff, the head of the Liberal party, and he scares the sh*t out of me.  Really.  He is the very definition of smug and disingenuous. He was born in Canada, but until very recently he lived out of the country for 30 years, referring to himself as an American. He is also on record as being the Member of Parliament who missed the most days in the House of Commons.  If a man is voted by the public to do a job, shouldn't he at least show up for work? 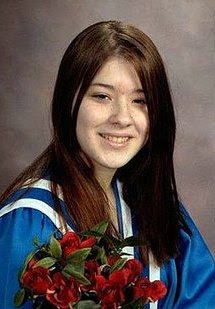 Canada has had a reputation for being soft on crime, and while our crime rate is not as high as many other countries, we have had an increase in violent crime. However, until now the criminals have had more rights than the victims. In 1984 the "Young Offenders Act" was enacted, which basically gave license to anyone under the age of 18 to do whatever they wished. Last year two boys aged 16 and 17 murdered 16 year-old Kimblerly Proctor in Victoria, B.C. They kidnapped her, tied her up, repeatedly raped her, choked her, kicked her and beat her, suffocated her, mutilated and burned her body and then dumped it under a bridge. It was a pre-meditated murder which they had carefully planned. These two monsters young men should be locked up for life and never see the light of day again. But because they are "youth", they will be sentenced under the "Young Offenders Act" and will get a minimal sentence, perhaps three years, with time off for "good behaviour", and we will never know their identities. This law should be changed, or scrapped altogether. Our current Prime Minister, Mr. Harper, is tough on crime, and says "Canadians deserve to live in a country where they don't have to worry when they turn off the lights at night, where they don't have to look over their shoulders as they walk down the street, where they can expect to find their car where they parked it."

Maybe we have swung too far to the left, and we need more structure. I don't know. I'm not particularly a conservative, but in this case I may vote for the man and not the party. At least Mr. Harper is Canadian.
Posted by Jo at 9:41 AM

I know that party labels don't always mean the same thing, in diff countries. But he certainly sounds as if he is my idea of a Conservative.

Needless to say, I am Conservative, with certain reservations. I have no, no, no "truk" with Liberals, and their "bleeding heart" views and "ivy tower" thinking.

The other guy in your election, liking to refer to himself as an American, is enough for me to reject him, if I was Canadian! There is a military term which fits here, in referring to his statement, but it's not used in "proper society" so I won't use it. But wow, does it fit. When does a person run in one country, "saying" they are "from another"?

Sorry for getting so carried away in your comments. :-) I have very strongly held political views, which I try to 'keep a damper on' in my blog. Because I know that an awful lot of women who read "In Pretty Blog Land," do not, not, not want political talk. -sigh-

So hey, thanks for giving me a perfect excuse to sound off! :-)

Good luck with your decision!

I just KNEW you KNEW how to say it, Josie! To the point exactly and exactly my point, too!

Here in Iowa - and I think this is true with most states - a person age 14 or older may be tried as an adult for a criminal act.

The judge decides whether to try the youthful offender as a child or an adult.

Not long ago a 13-year old boy shot and killed his abusive step father. That child will be set free when he is 18 years old.

I hope Canada is able to change the law so that older, mature youthful offenders will be treated as adults.

Vote for the conservative. He won't be soft on crime. I can't believe that those two boys will likely be released in a couple of years. And with not knowing their names, you'd never even know if they were living next door or not. Scary.

If your liberal is defining himself as an American, then I'd definitely not vote for him. You don't need to import any liberalism from us. (although I would probably be happy if more of our liberals would move to other countries)....Sorry, I wouldn't wish that on any country ;)

That's a really terrible law. I quite agree that those two monsters should be locked up for life as it is very likely that when they are released, they will do it again. After all, they got away with it the first time. They will probably use their time behind bars to plan more sophisticated ways to kill people so they don't get caught. It's shocking that they are not being tried as adults, which they probably would be here.

I also agree that a guy who considers himself American should not be elected to any office in Canada, regardless of his political views.

I'm going to stay out of your counties politics. But I agree with your opinion on youth offenders.

I looked up 'arrogant' in the dictionary,
and what did I see?
Michael Ignatieff
smirking at me!

Yes, he gives me the creeps too. I cannot vote for him nor his party. Why would anyone want this traitor as their leader?

I predict a conservative majority this time...and am fervently hoping we get tough on crime.

I would vote for the man, not the party. But so often here in the USA, we don't even have a decent difference between them. I voted for Obama, will vote for him again, because the Republicans scare me so badly.

Listen, the case that you talked about in this blog post is obviously horribly extreme and needs to be handled strictly but there is another side to this story...
You wrote:

"Canada has had a reputation for being soft on crime, and while our crime rate is not as high as many other countries, we have had an increase in violent crime."

Question: Did the violent crimes decrease in countries with tougher laws???? i dont think so.

You should be extremely proud of the fact that your nation Canada do not appear in this shameful list:

Your P.M. looks rather young, and youth doesn't go well with leadership. It goes well though with empty rhetorics and irresponsible moves.

I understand, however, that you've got no other choice than to vote for him and hope for the best.

We vote by party. It's troubling when you like some people of one party and some of others. But it almost guarantees that no single party will hold all the power.

I find it odd that we will embrace any actor or author as Canadian if they were born here, no matter how long they have lived abroad or their intentions to ever return, yet in this case Ignatieff is vilified by Harperites.