The Mystery Of The Rear Window... 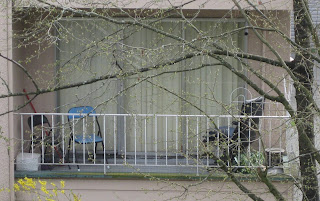 I have lived in the same treehouse for 13 years, and with the exception of a very few people, I have had the same neighbours for all of those 13 years. Most of them I know well enough to chat with ... "Lovely day today..." that sort of thing. A couple of them are fairly close friends. But the folks who live in the apartment two houses away are aloof and mysterious. I have never seen them, ever.  It could be Bigfoot and Godzilla living there, and neither I nor any of my neighbours would know it.  The lights are usually on in the evenings, so we are fairly certain the apartment is in fact inhabited, but the curtains are always closed and the place remains hidden behind the branches of the trees, like a Gothic English novel. It looks cold, dark and uninhabited. 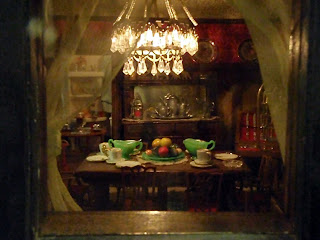 However, every Friday night like clockwork, the drapes are opened to reveal a spectacularly furnished apartment with wonderful antiques and carpets, candles and soft lights, and a table loaded with food and drinks.  The curtains stay open on this festive scene from around 7:00 in the evening until around 6:00 the next morning ... and no one is ever there.  Not a soul.  At dawn, the curtains close again until the following Friday.  I once thought I saw a flicker of a shadow in this diorama, but I realized I was mistaken; it was just my imagination.

For 13 years this same scene has played out every Friday night.  I'm sure there must be a story to it, but I am stymied as to what it might be.  I would love to hear some of your suggestions.  Do you have any idea what is going on when those curtains fly open on a Friday night?
Posted by Jo at 11:24 AM

This mystery is absolutely fascinating!

Very interesting. I am thinking maybe "Ms. Lonelyheart" lives there. Perhaps a widow or widower lives there and on Friday's he/she sets the table for dinner with their lost love...yet cannot bring him/herself to actually eat.

interesting - if you know the apartment number - send them a little note that says "I love your dining room - where did you get set or light fixture" See if they answer you. But it is strange that the curtains only open 1 day a week.

What a great idea for a short story writing contest!

You have piqued my curiosity. And I abhor nosy neighbors.

Have you ever knocked on their door with a cake of plate of cookies. No answer, leave them.

That's just bizarre! I was going to say that the lights must be on a timer, but I'm pretty sure that the open curtains & food-laden table aren't. Unless the food looks the same every week?

Alfred Hitchcock would have a field day with this!

I hope you find out the mystery and tell all of us who are as mystified as you are. I agree with Jennifer that it might be an old tradition that honors some lost love. Maybe?

The table is loaded with food and drinks...as if for a buffet? ...or are there place settings?
Could it be a place maintained by a business for visiting officials?
Could it be...a "party" house...?

Not to dispell anyone's mystery here, but could it not just be a model/show apartment?

Is the same dishes and food there every week? Very spooky! Wonder what would happen if the glass was "accidentally" broken ...... maybe a baseball.

What a story that could be woven around that scenario....hmmmm, I smell a mystery that you should write!

13 years?! Well, it's high time you knock on that door and and if neccessary ,start making inquiries. It's in your interest to know who you're neighbors are.

Can you see me smiling?

Most curious. Lot of interesting responses so far.

It is amazing you have not run into these mystery people in the hall or somewhere in the building or that other people have no idea who they are either.

Maybe it is a little hide away used by a very rich man or woman. He or she meets their lover every Friday evening. But, wait. Why would they leave the drapes open?!

Hmmm.... perhaps NOT knowing is more interesting than knowing!

Is this for real?

Or do you write cute little stories here, on occasion? :-)

Hi, everyone, thank you for your fun comments. I must say, the mystery of the Friday night parties does intrigue me. And I am not a nosy neighbour -- quite the opposite -- but it's hard not to notice the open curtains. If I were a fiction writer, it would be fun to flesh the story out. Or perhaps, the fun is in the mystery of not knowing. :-)

You write a very interesting Post Madam. I'm new in town, so I'm following you (sheesh I sound like a stalker). Nice to meet you. I hope you can stop by my new blog too. Thank you, and have a wonderful day!

Personally, I hope you (and we) NEVER learn the truth. It would probably be far more mundane than the stories our imaginations conjure up. Sometimes, a mystery should remain a mystery.

wowww.....I became really curious..I hope you will find out what's going on there and post it here.... I kinda agree with Jennifer D...but that would be a really sad story....

The beginning of a good mystery story Jo. Get your pen and paper....oops I should say sit down at your laptop and start writing!
What a great beginning!

Could they be having a Sabbath dinner after sundownFriday evening (assuming they might be Jewish)?

I'm not sure of the rules but maybe that has something to do with the windows open too?

Goodness! I need to know if the scene changes, or if it is always exactly the same, like a painting. Can you see well enough from your window to tell if the food is different, because I suspect the drapes are on a timer and that no one lives there. But for some reason, the home is kept perfectly, as if it is waiting for someone.

It reminds me of the apartment in Paris which was discovered several months ago - it had been rented for over 50 years although the tenant lived in Province all those years and never visited. When it was finally entered upon her death, it was like a royal tomb with exquisite antiques galore. (I did a post about it at the time, which you probably read.)

Have you thought on going up to that apartment on Friday night? What a delicious mystery!

I'm with Heart in San Francico, I'm dying to know if the dishes stay the same or if they change. You have to let us know. If they change it has to be your Friday post. Lol. Please update us this is too good. This makes for good tv.