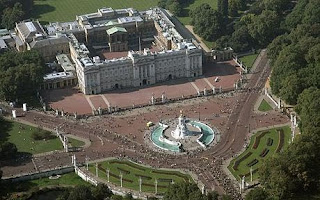 In spite of all the naysayers, I am rather looking forward to watching the wedding of William and Kate. It's living history. The relevance of the royalty has changed over the past few decades. Now they are more of an industry for Great Britain, than anything else. Tourism is the 6th major revenue generator for England, generating about £76 billion a year for the Brits, (that is about $104 billion in U.S. dollars). London is the most visited city in the world, ahead of Bangkok, Thailand and Paris, France. The main attraction in England? The royalty. 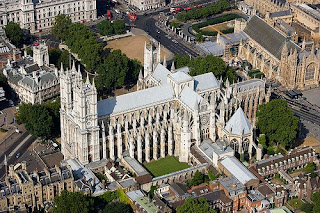 One of the most interesting places in London is Westminster Abbey, the church where the wedding ceremony will take place. Westminster Abbey was built in 1050 and has been the coronation church since 1066.  It feels very much like a tomb in many places, because it is the final resting place of 17 monarchs. 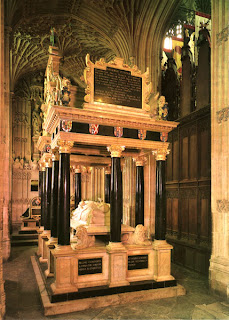 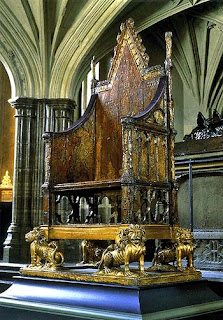 Of particular interest to me was Saint Edward's Chair (the Coronation Chair, built in 1296) which is accessible to everyone. It is carved from oak and its appearance is of aged and bare wood. On it is carved the initials and other graffiti from tourists and choir boys in the Abbey. I had imagined the site of the coronation of monarchs throughout the centuries to look much different.  I was tempted to add my initials, but decided against it.  In the movie, "The King's Speech", Lionel Logue sat in Saint Edward's Chair, and King George VI was almost apoplectic.

There is so much history in that old church, and now it will be the scene of history again. An ordinary young woman whose family worked in the coal mines of England will become a princess and a possibly one day a queen. She will become part of the history of Westminster Abbey. I wonder what the old Tudor Queen would think of a future king marrying a commoner.  If folks listen closely, perhaps they may hear a ghostly voice echoing throughout the Abbey, "Off with her head...!", as Queen Elizabeth the 1st spins in her grave. I think it's a wonderful story, one that Shakespeare would enjoy.

When William and Kate are married, the bells of Westminster Abbey will ring out for three hours. And in true 21st Century fashion, if you miss any of it, you can follow Westminster Abbey on Twitter.
Posted by Jo at 11:55 AM

I'm really looking forward to it. It is history in the making as you say and we all get to be a part of it!

I will watch the ceremony after the fact, on TV, but I too think it's a bit of history happening right now. I watched Diana and Charles, too...

I can hardly wait! I've already ordered the scones from Cobbs!

I am one of those who is more than willing to spend my money as a tourist in London and Westminster Abbey is a favorite place to visit.
I will enjoy watching the wedding as an addition to the history of the monarchy.

Oooh yes, wedding fever here and no mistake. The streets of England will be empty, thrilling times begin.. the biggest party for the world to share :)

Amazing post Jo.
i absolutely loved your description of Westminster Abbey and its history.

And obviously i wish the couple a very happy and long married life.

It's a historic place, for sure.

I wonder what Kate will be thinking as she's processing down the aisle.

Love this Jo! Loved the KINGS SPEECH! and u are right Royalty is fasinating! I will enjoy the wedding also!

I think the British royals are a bloodthirsty bunch, historically. How can civilized people behead one another? And let us not forget that Diana was a commoner, too.

God help me, I'm looking forward to the wedding, too. I think we all need some fairy tale news once in a while, and this is the perfect fairy tale, after all!

Guess who is going to be watching or at least DVR'ing it? *raises hand* Me, me!

I absolutely LOVED that part of the movie. So incredible.

I'm a history buff, and one who loves weddings so of course I will be watching. No matter what you think of the instatution of the monarchy I would think one would wish the couple many happy years to come.

P.S. - Diana wasn't a commoner. She was Lady Diana before marring the Prince - her father was the 8 Earl of Spensor.

Amazingly it seems half of the USA and other countries have been camped out on the pavements and embankments for days (and nights of course) just to be there, or nearly there, in person.

Well, jolly good luck to them and I hope they all have a nice day on Friday and that they don't get too wet.

Kate is hardly 'a commoner' her parents business is estimated at 30 million English pounds. She went to Marlborough College which boasts many of the great and good of the UK http://en.wikipedia.org/wiki/List_of_Old_Marlburians
She is from 'the right background' as was Diana again not a commoner in the strict sense of the word.

The Mary Elizabeth i is buried with IS NOT Mary Queen of scotts. This mary is Mary I, also known as Bloody Mary, her half sister, daughter of Henry VIII and Catherine of Aragon. Mary Queen Of Scotts is buried in Westminster abbey but across the hall from the Tudor sisters.