Toddlers and Tiaras ... the Sexploitation of Children...

This week's front cover of People Magazine features the reality show "Toddlers and Tiaras", a television show about children's beauty pageants. The inside cover features an advertisement for a new TV show called "The Playboy Club".  The tagline for the "The Playboy Club" reads "Don't let the fluffy tails fool you."  As soon as I opened the cover, the irony of the connection between the two articles hit me, along with the similarity of the over-the-shoulder glances of the little girl/woman in the photographs.

I'm not a prude, and I have no problem with the sexualization of adults.  Sexuality is an integral part of being human.  It's what makes the world go around.  But I do have a problem with the sexualization of little girls, and children's beauty pageants do just that.  Little girls are heavily made up to emphasize full lips and long eyelashes, they are spray tanned, hair sprayed, glittered and glamourized, and paraded around on a stage in revealing outfits in provocative poses, for adults to judge them.  Many of the judges are adult men, and I find that just a little bit creepy. The little girls range in age from about two years old to 14.  In the People Magazine article, one mother said that her little girl was on a beauty pageant stage when she was seven days old. That's right ~~ seven days old. 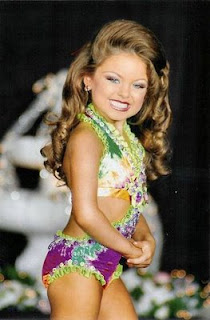 All little girls love to play dress-up. I remember clomping around in my mother's high heels, wearing lipstick from the samples the Avon lady left at our house. Sometimes I would put a towel on my head and pretend I had long hair. It was wonderful fun, and every little girl loves to do it, and my daughter loved to do it as well. But there is no way in the world my mother would ever have allowed me to look like this, nor would have I allowed my daughter to do this. What is wrong with the parents of these little girls?  Don't they understand the extent to which they are putting their children in harm's way?  The murder of JonBenét Ramsey has never been solved. For several years her parents were the prime suspects, until they were absolved of any blame. But just how responsible were they, indirectly?  Child beauty pageants are open to the public.  Anyone can attend them, and they're not regulated.  In fact, child beauty pageants have no regulations at all. The cost of entering the pageants is far more then any of the meagre winnings.  And yet, for a huge multi-billion dollar business exploiting children, there are no rules regarding child labor laws.  And make no mistake, these children are being exploited by the networks who televise these shows as well.

Reality TV has gotten out of control.  We are now privy to all aspects of people's personal lives.  I'm not really interested in what people eat, or what they hoard, or with whom they socialize/fight/sleep, or how much money they make at garage sales...  But I do think any reality show that involves children's private lives should be banned.  Children don't have a say in how much of their privacy is revealed to millions of people.  Childhood is the time when we ~~ the big people ~~ should be protecting children, not exploiting them.  This "Toddlers and Tiaras" show is creepy.  Please cancel it.
Posted by Jo at 10:21 AM

You are absolutely right, Jo. The whole child pageant lifestyle is an outrage. It sends the girls a bad message on so many levels. Seeing a tiny girl dressed, made up, and behaving like a woman of 25 really creeps me out, too.

I recently read a magazine article about one of these families. They were of very modest means and lived in a barely adequate house, yet spent thousands a year on this stuff. If they are going to spend such a disproportionate amount on their daughter, it could be saved for college, trade school, down payment on a first home, a car to drive as a young adult, anything that would really help her get a start in life.

Paula, oh goodness yes, I totally agree. These little girls' self-esteem could be built by education, training, skills, so many other things than how they look or smile, or pose. I think the whole thing is disgraceful.

I agree with what both Jo and Paula said here, but I will go you one further. I find the over-sexualization of women to be creepy as well, and I am a man. I do not like playboy bunnies or women who think that looking and behaving like a bimbo is hot. I am not a prude, or overly religious. I just find that intelligent women who dress and behave like adult women rather than bimbos to be much more attractive.

I have read a couple of books recently on this issue. One is about raising girls and has a chapter about letting them be girls and not prepubescent sex queens, Girls on Edge by Leonard Sax.

The second book is decries the bimbo culture as being a force of feminism, Female Chauvinist Pigs by Ariel Levy.

It is tragic that girl's and women's self worth are often so imbued in a meaningless culture of beauty and fashion. Myself, I find brains and abilities to be very sexy.

Jo, I find it amazing that you wrote this entry just now. I stumbled on that show TODAY, and watched half an hour with my mouth hanging open. And then I realized that MY WATCHING IT, regardless of my numb horror, was supporting it and I turned the tv off. I came to write a blog entry and there was yours--written more powerfully than I could write it and put before FAR more people than any entry of mine would be.

THANK YOU. It was horrifying to watch the parents push little girls of 3 and 4... watching the little girls scream, even when one of them won. Seeing them with dental inserts, wigs, cinched in fluffed out, absolutely obsene. And, to my eye? Some of it seemed abusive by any legal standard.

So often, the girls seem joyless, or their pleasure at winning seems tied solely to the degree of "love" expressed toward them by mothers who live or die by the wins, by the judgments of others.

Your blog said all that need be said. The show should be cancelled. I am ashamed that I watched it at all, no matter whether or not I was watching in disbelief. Another show like it? DANCE MOMS.

One would think that Jon Benet Ramsey would have been enough of a slap in the face for any network much less a parent to not put this pedophile crap in the public eye.

I loved in Boulder when JonBenet Ramsay was killed. It was an eye opener to see the sexploitation of these little girls. That picture you have here, Jo, is simply horrifying. What are their parents THINKING???

I love this post...I have been fired up about this for quite awhile now. It absolutely sickens me to see this little girls made up like little hookers. It's disgusting and their parents should be ashamed instead of making money off their little girls bodies.
Now, how do we get it off the air?

I agree with all of this. There is no valid defense for the sexploitation of these girls. I'm sad that I live in a culture where this is ok and where people actually defend this.

I also agree with Sextant, that the sexual exploitation of all women is not only creepy, but so damaging on so many levels. All of this started with the increased sexploitation of women. I mean, look at the example that someone gave of the Playboy bunnies in the poses as the little girls. But look at the adults- they're sex bunnies!!! Childlike, but sexual!! It's a slippery slope and now it's reaching the kids. Really, we shouldn't be so shocked it's gotten to this point. Women are becoming so misdirected. I'm personality not ok with the sexualization of anyone. I'm not a prude and love being a woman. But I certainly don't think that my sexuality should overpower anything else about me. That's a piece of me that's left to my boyfriend and keeping it for him makes it so much more special.

I could go on and on about this topic....maybe I'll write a book lol!

Amen! Standing ovation from me. I could not agree more. It's disgusting that so many parents are so hungry for attention that they exploit their children and put them in danger. Little Jon Benet Ramsey should be a cautionary tale, and it's shocking that she has already been forgotten by others eager to cash in on their own children's lost childhoods.

I saw this show ages ago and have even seen one of the little "winners" on a talk show. It's disgusting, degrading, and creepy - just as you say. I will NOT watch it again and think the entire concept of little girls being "beauty pageant winners" is horrid. I even heard one mother say that being a "princess" is nothing because it means her little darling isn't good enough! Imagine!

Absolutely spot on! I am also someone who has loved sex -- but hate exploitation. Particularly of children who are so easily exploited. But of everyone. Sex without love is rape. People who commercialize it are pimps.

I agree - and yes creepy indeed.

I have long held that this sort of pageants are exploiting the children and their families. Unfortunately, the terribly misguided parents are deemed to have the freedom to enter their children in these exhibitions. Freedom was never meant to include such irresponsible behavior.

Right on. Those pictures of the young girls you posted are GROSS. Just gives me the creeps. And I hate the idea of that playboy club TV show, too. Didn't we work hard back in the day to un-do some of this crap??

Your generation certainly did and the some of the younger generation seems to think that means it is now cool to wear Playboy bunny symbols on skimpy outfits, get breast enhancements, and behave like bimbos. See my reference to Female Chauvinist Pigs by Ariel Levy in my comment above. This is very disheartening.

Never watched it, won't watch it and I agree 100% with your post.

I couldn't agree with you more. When I was a would be dancer very long and far away, I saw this thing all the time. Little girls had head shots and 8x10 glossies that looked like they were meant for the cover of Cosmo. (Is that mag even still around?) I used to say that all stage mothers should be burned at the stake.