They Always Get Their Man...? 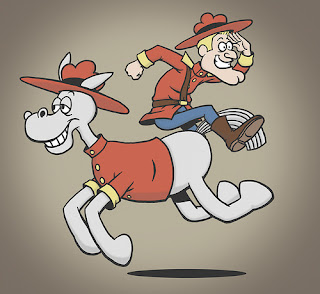 I love the RCMP ~~ I really do. They're much more than Canada's national police force, they're an integral part of Canada's history.  They just so ~~ Canadian.  Who doesn't have a feeling of national pride, watching the men in the red coats, riding the beautiful black steeds in the Musical Ride?  They truly identify Canada as the land of the "True North Strong and Free". However, lately the RCMP have been doing some really dumb things, for which they are getting a bit of a bad rap, and in some cases it's well-deserved.

A few days ago an adorable little three-year old boy by the name of Kienan Hebert was abducted from his home in the middle of the night.  The abductor was identified, and an Amber Alert was issued throughout British Columbia and Alberta with the abductor's car and license plate.  Everyone was on high alert to look for this individual.  However, as the days wore on, hope dwindled as neither the little boy nor his abductor were found.  On Saturday,  Kienan's parents went on television and pleaded for the abductor to return the little boy, just drop him off at a gas station, or at his home, or anywhere where he could be found.  The abductor's mother even went on television and pleaded for his son to return the little boy.

And then the miraculous happened.  At approximately 3:00 a.m. on Sunday morning, the little boy's abductor dropped him off at his house, and then phoned 911 to alert the RCMP that the little boy was safely home.  The abductor then disappeared.

Okay, I know ... you can see where I am going with this.  You're way ahead of me.  You're thinking the same thing I'm thinking.  Would it not have been reasonable for one of the best police forces in the world to have had an invisible stake-out at the little boy's house, just in case...?  If there was even the most remote possibility that the abductor would do the right thing and return the little boy to his family, shouldn't someone ~~ anyone ~~ have thought, "Say, listen, we should probably keep someone posted under cover at a few locations, just in case..."

Police on Monday said they "facilitated" the safe return of Kienan Hebert after he was missing for four days, but would provide few details on how an abductor might have been able to return the three-year-old boy to his B.C. home undetected. RCMP spokesman Cpl. Dan Moskaluk said revealing too much could jeopardize the investigation, which is currently focused on finding Randall Hopley, 46, the main suspect in this abduction case. ~~ Montreal Gazette

In addition, according to the Montreal Gazette, driving to the Hebert house would have required passing the search-and-rescue command post at the entrance to the suburb, as the community has only one road in to it.  So, in the middle of one of the biggest manhunts conducted by the RCMP in British Columbia and Alberta, and with the whole community on the lookout for this man, he was able to slip back into town, return the little boy, and slip away again ~~ like a thief in the night.  The abductor ~~  a registered sex offender who had earlier attempted to take another child from his home ~~ is now off scott free, tripping the light fantastic, while the RCMP is trying to find him.

Oh my word, where's Dudley Do-Right of the Mounties when we need him?

They sure were asleep on the job on this one...probably like that air traffic controller, the guy at the entrance to the suburb fell asleep - literally! *shaking head*

Leslie, I know...! It's embarrassing. At least the little fellow is safe and sound at home. :-)

Thank God that little kid is safe, but you are right - how the hell did they let the guy get away? You've got to wonder!

I have to say though that only in Canada would you have a case of a sex offender returning a kidnapped child. Glad the boy is safe and for this little act of humanity on his part, I hope that the kidnapper is caught and not meet a more tragic end.

Calvin, yes. I hope he is treated with the utmost compassion, if and when he is found. He did a very noble thing, actually.

I can't imagine a story that ends like that in my neck of the woods. Canadians are a classy bunch.

We had 55 policemen killed last year and hundreds of our children went missing.

Canada is a great society!

Not even the RCMP can be perfect every time I suppose...

I hate to say this, but its nice to know that Americans aren't the only ones with incompetent police forces...

I'm glad this little boy was safe, but I fear for the next victim.

Linda, well this is an exception. It doesn't always happen this way, I must say...

Fiftyodd, well, it does happen here too, but in this case it had a happy ending for the little fellow. I actually hope the abductor will be okay too. Maybe there's hope. :-)

Cloudia, *heh* yes, you're right. I guess they will have to change their motto to "We sometimes get our man..."

Well, let's look at this as if they were smarter than the average bear.

1. They know his identity.

2. His momma knows and has done the right thing.

3. The child was brought back ALIVE.

So .... if he had been arrested when he brought back the child.... what odds would you give that the next scumbag would bring back a living child and drop them off anywhere?

We can hope that they have the guy under surveilance and are just waiting for him to blow his brains out and save everybodys time and money.

@eloh, well, you do make some very good points. And I had not thought of the fact that they have him under surveillance. I suppose it is possible. People are scared, though. There's a run on alarm systems at the moment. :-)

I always loved Dudley Do Right!