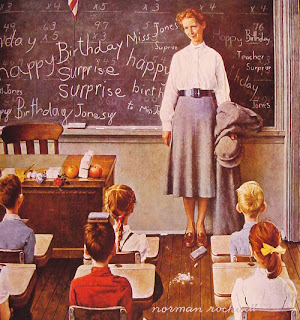 Now that school has started again for another year, I have been thinking lately about some of my teachers throughout the years. My favourite teacher was Miss Jones, my grade one teacher. I thought she was the sweetest, most beautiful, most intelligent person I had ever met. She was patient and gentle with all of the children. I remember one little boy ~~ Bobby ~~ who, it turned out, was severely intellectually challenged. He was a good-natured boy and everyone liked him, but the school work was beyond his intellectual capacity. He disappeared one day, several weeks into the school year, and we never saw him again. Miss Jones explained to us that Bobby had gone to a special school. I remember she had tears in her eyes when she told us, but we were too young to understand.  A few years ago we had a school reunion, and Miss Jones was there, much older but still very pretty.  It was wonderful to see her.  She hugged me and said she remembered what a cute little girl I was.  I realize now that Miss Jones was only 21 years old when I was in grade one. 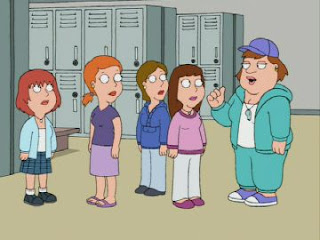 It's amazing how a teacher can have an effect on a child's self-worth.  When I was in grade eight ~~ that alligator-infested swamp of middle school ~~ I had a teacher who didn't particularly like me.  She had three or four *favourites* and the rest of us were just ... well, the rest of us.  She seemed to take great care in pronouncing my name incorrectly, even though I told her several times that it was pronounced this way, not that way.  I realized years later that she was not a particularly inspired teacher, and probably didn't do it deliberately.  But, at an age where girls want to feel accepted by their peers, and by their teachers, she made it blatantly obvious that most of us were not ... just so.  She was very young at the time as well, only 21 or 22, and there is still a huge level of immaturity at that age.  I hope she became wiser in later years.

Mrs. Winters was a jock, and was also the girls' gym teacher.  She was married to the boys' gym teacher, Mr. Winters, and together they produced a gaggle of little jock-children.  I was never a jock.  I enjoyed sports such as ice-skating, bike-riding, hiking, swimming, but I loathed and despised competitive sports.  Oddly enough, however, I was good at baseball, and Mr. Winters said he had never met anyone who could hit a baseball the way I did.  I once hit a ball from the sports field all the way to the gymnasium, and knocked out a window.  Mr. Winters just stood and stared at me in amazement.  I felt that redeemed me somewhat with Mrs. Winters ~~ temporarily, anyway.

A few days ago I ran across Mrs. Winters on Facebook.  I sent her a friendly message, however, I doubt she will remember me, and I don't expect to hear back from her.  She probably would not recognize my name, in any case.  She never could get it right...
Posted by Jo at 10:12 AM

It's amazing what a difference a teacher can make. The good ones just make you soar & the bad or indifferent ones tether you to the ground. I knew from early on that I didn't want that kind of responsibility thank you very much.

Hmm - I wonder if my 8th grade English teacher is on facebook - and if she'd remember the time she gave me a 0 because I let someone look at my paper. But she also gave me all those fabulous words that I love so much today :)

Some teachers touch our lives and we can only understand just how much when we get to our age dear Jo. I recently came across my favorite high school teacher on facebook as well.

I immediately sent him a message asking for his email so I could tell him how much he meant to me. He sent me the email address and I wrote him a long letter with many memories of the things he taught me and the things I learned from him that he may not have known he was teaching me.

His letter back to me was filled with such humility. Instead of taking the praise I lavished on him for himself he turned it all around and also reminded me how grateful I should be to the staff at the school, the principal, the school board, etc, etc that provided my education and him as a teacher. He's a wonderful man and I'm so glad I had the opportunity to thank him.

I'm sure your Mrs. Winters who was young and naive will appreciate hearing from you.

Excellent post. I think you are too kind to Mrs. Winters though. I doubt she deserves it. Perhaps she did grow up, but well...it is your memory. Your kindness is exemplary.

I remember teachers who I loved, and some who hated me enough to make my life miserable. But they have all impacted me in one way or another. Teachers have a huge influence on the lives of their charges. This was a good reminder of that fact, Jo.

Oh, the memories you bring back writing about teachers! I liked all my teachers, but some were so much better than others.

It wasn't until my beloved band director died some years back that I knew he was only twelve years my senior. No wonder he was so strict and grumpy sometimes when he had two bus loads of us, complete with all our gear and only a couple of parents along to help, on the road. He was probably terrified of losing control of us or letting something happen to one of us. He was really quite young.

My other strongest memory is the retired WAC sergeant who was my eleventh grade honors English lit teacher. She scared me to death but was an incredible teacher. We had eight books for that class, plus the novels we were to read. When she walked in and introduced herself, she picked up the top one on the stack ("30 Days to a Better Vocabulary")and said "If you expect to pass this class, you should have finished this one yesterday."

One bad memory is an eighth grade American History teacher who told us if anyone made a hundred on a test after being absent the day the test was given to the class, they would get a failing grade. One test day I had some illness and my parents kept me home. I did not see or talk to anyone from school. When I returned and took a make up test, I knew all the answers, so I picked the question I considered least important and answered incorrectly to avoid being failed. The injustice rankles to this day, 46 years later'

Would love to read more of everyone's memories!

I still remember my 3rd grade teacher so very fondly, and have tried to find her w/o success. She was the only grade school teacher I had who loved my inquisitiveness instead of finding it disruptive, and I adored her for it.

I had no idea you were Willie Mays! You put me to shame.

Why don't you start a blog. I believe I would enjoy it very much.

That is very flattering, Sextant, but I just don't have the bug, partly because I'm not computer savvy enough, and partly because I know myself. It would become an obligation and an obsession.

Well the savvy part actually is pretty easy, you become savvy by doing. Ahh, the obligation and obsession is perhaps why I sense that your blog would be a delight. Well your comment was certainly delightful. If you won't blog, please feel obligated and obsessed to comment. I enjoyed your and everyone else's comments here. Then of course there is Jo, who is pretty remarkable. Very nice blog.

Jo I am so glad I came by this morning and read this lovely post. You are a writer and if I were a teacher I would give you a A plus.
Teachers can make such a difference in our lives. Never thought of looking up mine on facebook.
We need to keep in touch more I have missed you.
When are you going to be my blogzine guest? lol
Love
Maggie

I still remember the really outstanding ones - Mrs. Chadwick in fifth grade, Mrs. Hill in high school, and the fabulous Dr. Homer Swander at UC Santa Barbara. They made a huge difference in my life.

I hope a few of my former students think kindly of me! And you get an A+ for this prose! :D

I've been fortunate to have some outstanding teachers who came into my life at "just the right time."

I've also had some "lemons" who made school an unpleasant experience and left their mark.

A good teacher makes all the difference in the world in so far as instilling a love for learning.