A Case of Mistaken Identity... 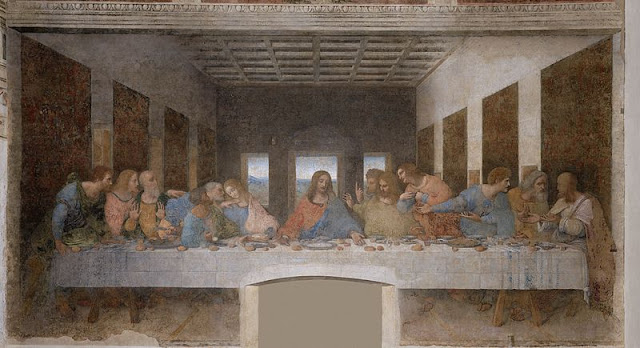 Yesterday I visited a wonderful exhibit of Leonardo da Vinci's brilliant inventions and paintings here at Science World in Vancouver.  Da Vinci was a genius, of that there is no doubt.  His paintings are  not only masterpieces, they are architecturally perfect.  It took da Vinci three years to paint "The Last Supper", which is a relatively short period of time, considering the technique he used.  Rather than painting on wet plaster, fresco, he painted it on a dry wall and then sealed it with pitch and gesso.  The painting depicts the moment just after Christ tells his disciples that one of them would betray him that night, and they are all vehemently denying it.  Notice their body language.

As I looked at the painting, there were two delightful little five-year old twins sitting beside me.  The little boy announced very grandly to his sister that "The man in the middle of the painting is Leonardo da Vinci".  To which the little girl replied, "No it isn't, it's Jesus Christ".  Much discussion ensued.  Their Mom finally stepped in and said, yes indeed, it was Jesus.  I chuckled.

It's true.  No one knows for sure what Jesus looked like.  The Bible does not describe his appearance, although his image has become one of the most recognizable images in history.  He is generally depicted as tall, blue-eyed and golden-haired.  Jesus was Middle Eastern, so therefore he would probably have been fairly dark and swarthy.  He would also, in all likelihood, not have been very tall. 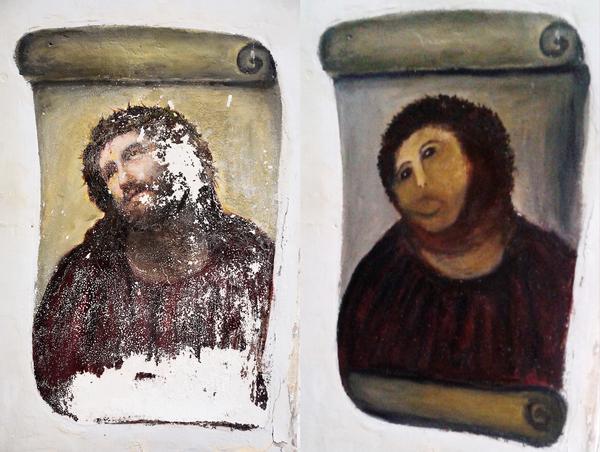 Recently, an elderly woman in the village of Borja, near the city of Zaragoza volunteered to restore a fresco of Christ by the 19th century artist, Elías García Martínez, in Santuario de la Misericordia, a Roman Catholic church. Bless her heart, her intentions were good, even if her artistic talents were sadly lacking.  The new painting has taken on a life of its own, and has generated millions of Twitter fans, and has generated tourism for the small town in Italy.  And from what little we know of Jesus, it may actually be a closer representation of him than we think.  Would Jesus be amused?  I have a feeling he would have a really good chuckle. Would he forgive Cecilia Giménez for her embarrassing mistake? Well, what do you think?  She didn't really betray him; she just made him look a little bit like one of the Kardashians.  That's not a sin, is it?  Is it...?

Tragic though the decimation of the painting is, I can't help laughing at it. It's SO extreme!

I don't know Jo - making someone look like a Kardashian might be one of the unforgivable sins :)

I'm with The Bug. The less like them, the better.

Sort of has a Picasso thing going with the mouth.

My guess is that the restored painting will become much more popular than the original! It has an interesting, modernistic look to it. I rather like it actually.

Oh yes ... the Scandinavian Jesus -- tall, slender, long blonde hair. I work with a man who has pictures of Jesus in his cubicle and they all depicit Jesus this way.

I asked him once if he really believed Jesus looked like he was from Norway. He said yes, of course, certainly.

I reminded him Jesus lived in the Middle East -- he did not like that thought as he thinks anyone from the Middle East is a terrorist. Like most religious radicals he is narrow minded, ignorant and bigoted.

hahaha.... that painting was extreme in every sense and I agree with all the first 4 commentators... :D

And yes, Russel is right. people tend to give their own perfect visions of the religion they believe in. Like the Scandinavian Jesus, perhaps.

There is a distinct simian quality to her depiction, and whether Jesus was blond or brunette, I doubt that he looked like an ape. I will not attempt to answer the burning question of whether the Kardashians are human.

At least the Kardashians are Armenian so it's a better comparison than the Scandinavian version!

lol, Oh Jo! Always picking on my poor Kardashians...lol. Great post. I had seen that picture of Jesus but I didn't know what that was all about and hadn't had time to go back and find where I had seen it and research it. Glad you did a post on it. Very intersting!