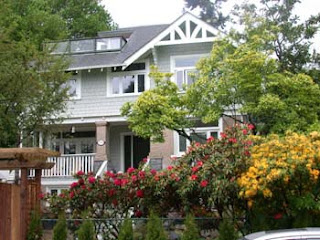 The neighbourhood where I live is a quiet residential district in Vancouver called Kitsilano, or "Kits". The population of Kits is approximately 50,000, and the area is made up of mainly early 20th Century Arts and Crafts bungalows and beautiful heritage houses like the one in this photo. It’s a lovely, unique neighbourhood with great shopping and beautiful beaches. I have lived in Kits for several years, and in my current apartment for over 14 years.

The house next door to mine is an old turn-of-the-century house that has been renovated into separate apartments, and the owner, Mr. Robert Helgason of Port Moody, B.C., rents only to university students. It's like living next door to a fraternity house. Last night there was yet another keg party going on, and this time I took a video of the festivities. It was dark, so you aren't able to see much, but you can hear it. Oh, goodness, you can hear it

Your mission, should you choose to accept it, is to offer me some suggestions -- any suggestions -- as to how I can get rid of these folks once and for all. Perhaps the sound of bagpipes at 4:00 in the morning might do the trick. Or I would be happy to send them some of my wasps.  My friend Russell suggested lobbing a stink bomb into the middle of the mob.  I rather like that suggestion.  Anything to get rid of these noisy neighbours.

This video was taken from my bedroom window last night as I was trying to sleep.

Arson is illegal, but using one of these is not:

I like how you so casually insert the owners' name....

The city finally closed a troublesome frat house in my town. Neighbors got the city to inspect the house and a lot of expensive to fix violations were found. Worth at try. Good luck!

VioletSky, yes. *heh* I hope if he or anyone Googles his name, this will pop up, and he can watch the video for his viewing enjoyment. :-)

MerCyn, yes, the Vancouver City Police Department have said the house is definitely violating the bylaw, and I should contact the Property Use Department at City Hall.

This sounds like the neighbours above me!
You really should do something about this.

If I were you, I would have already gone Postal. :/

P.S.: Funny(in a sad way) how loud they are compared to their party's music.

PinkPanthress, I finally had to go next door and tell them to shut it down, because it actually got twice as loud, the drunker they got. I'm soooooo tired today.

He doesn't have to rent to university students. What are the noise ordinances in your town? Call the police every single time that they have an infraction. Also, what are your neighbors thinking too? Surely they can hear all this too. Isn't there a government agency that handles use restrictions for buildings? Good luck, Jo. This is insane. Your place used to be so peaceful.

Kate, yes, I sent a copy of the video to the Vancouver City Police Department, and they said to call them next time it happens. I also sent a copy to the City of Vancouver Noise Bylaw folks. I would send a copy to the owner if I had his e-mail address. He has six suites in those two houses, with 18 people living there, and they are all university kids. They each pay $700 a month, so that is $12,600 a month he is making from those two houses. He doesn't care what they do. Now I know why people go Postal. :-)

How about some firecrackers or bottle rockets?!! Seriously though, I agree with Country Girl. And you are right--when landlords make that much money in rent, they don't care what goes on. *sigh*

Take up a very noisy brass instrument (french horn?) and practice early in the morning, facing their house.

Seriously though I would call the police.

I wouldn't give up, Jo. The place is violating the municipal code.

I think I sent you this link before when you complained:

Little pricey and won't have a great effect in the house. Not to mention you may get some complaints from neighbors with well behaved teens.

My other suggestion was to call the land lord repeatedly while party is going on. If he doesn't answer leave messages on his machine. It will keep you occupied during the party and him occupied the next day deleting them all.

Well, you've got some excellent proof, and perhaps you might want to contact the Property Use Department or an attorney.

John! Firecrackers! Hey, now there is an idea. :-)

Navigating Northward, Phinnaeus has a trombone. Perhaps he might let me borrow it. *heh*

Linda, oh, trust me, I am tenacious.

Sextant, I wonder if they sell the Mosquito MK4 Multi-Age in Vancouver. It would sure do the trick!

Paula, yes, I have sent the video to the Property Use Department. Also, I work right across the street from them, so I will pay them a visit on Monday. :-)

The Mound of Sound said...

Jo, seriously, there's really only one solution - grenades. I know it sounds drastic at first...

I lived in one of the H brother's houses, they own 3-4 houses in Kits, and experienced the same problems with the boys in the garden level suite. Loud parties at all hours on any given night of the week. One night we smelled burning and my roommate went down to their suite to investigate and they had all passed out and left food burning on the stove. Had they not left the door open we may not of put out the fire in time. After 4 years of that nonsense we chose to move. For the amount of rent we were being charged we felt we deserved a lot more.
You could try complaining that they are unsafe neighbours.

In retrospect leaving it to burn would have solved a number of problems.

I actually suffered a fairly serious injury in that house due to neglect. Shoulda gotten a lawyer.

All in all I would deem the house unsafe.

Also, it became infested with rats and squirrels,which was the last straw for me. Call the health department, maybe they'll tear it down.

It's ironic that this house is still one of my references.

I tend to rent long term...why a landlord would value his word over mine is beyond me.

I strongly disagree with how much power the owners are granted.