A Little Girl and Her Sheltie
Charles Burton Barber

When I was a little girl, I was afraid of everything.  I grew up during the Cold War -- an age of fear.  People were constantly afraid.  Every day, the news broadcasts led with the latest posturing between the U.S.S.R. and the Western nations.  There were "Commies" hiding under every bed, never mind bogeymen.  During the Cold War, each nation developed and tested the latest in ghastly weapons with the potential to wipe out all life on earth.  And as if that weren't enough, we were visited on a daily -- nightly -- basis by little grey men who astral-projected themselves down from UFOs hovering over our cities.  Livestock were mutilated, and people were abducted and had horrible experiments performed on them, usually involving long needles and other devices of torture.  Commies under the bed and aliens outside the bedroom window.  It was a scary time, I'll tell you. 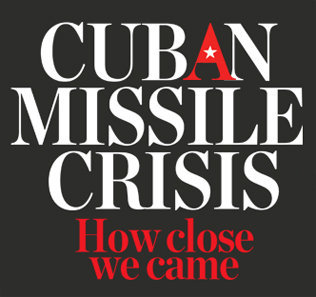 And then it happened.  The unthinkable.  The world came within hours of blowing itself up, all over two opposing ideologies, Communism versus Capitalism. Two enemies of the Cold War played chicken with the lives of billions of people.  President Kennedy of the United States and Premier Kruschev of the U.S.S.R stared each other down for 13 days in October 1962.  Kruschev blinked first.  Kennedy prevailed.  The world once again was safe.  And I went from being frightened to being angry.  Very angry. P*ssed.  I had had enough fear.  It had seeped into my soul and my psyche and had created a long-standing anxiety that I still gives me difficulty to this day.  And whenever I think of it, I get angry.

Today, October 28, 2012, is the 50th anniversary of that stare-down.  During the years since then, we have had plenty of fear mongers, still trying to create anxiety in people.  And I'm still p*ssed.  Hurricanes, floods, fires, earthquakes, tsunamis are not acts of God.  God is not mad at us.  These things are not signs that the world is going to end on December 21st, they are simply acts of nature.  In the last 50 years since the world stepped back from the brink of annihilation, we have ticked along pretty much as we did before.  People go about their lives, for the most part just minding their own business, and getting along the best they can.  There are still countries where ideologies clash, leaders that still play silly buggers with each other, and innocent lives that are lost as a result.  But these are not acts of God.  They are acts of man.

I'm angry that I spent my childhood being afraid.  And for what?  Ideologies, philosophies, religions and political beliefs come and go.  People agree to disagree.  But I pray we never again come as close to complete obliteration of mankind as we did on those 13 days in October 1962.
Posted by Jo at 5:12 PM

hmhm...something that occurred before my generation. Yes, I have read about, seen movies about it but still - far away from the time line to have a strong opinion about it.

But I can understand your perspective while reading your post.

I remember sitting at the kitchen table one night with my entire family as we listened to the radio when President Kennedy was speaking. I hadn't been aware of what was going on but I do remember the relief on my parents' faces that night!

I do not think, that those Politicians thought about the scared children or any average Joe.
It's a shame. :[

The funny part is, that neither Capitalism nor Communism is good.
Though Capitalism won in more than one ways, just look at the World today.

I'm reading "Killing Kennedy" right now, and they just finished that part of history. I was in college and don't remember being too afraid. I guess I was like the college kids of today....nothing can harm me!

I'm glad we didn't have a nuclear war!

As one gets older one comes to realise that nothing matters in the end.
Listening to the doodlebugs, or buzz bombs as they were sometimes called, and hoping none would drop on OUR house during WW2,seemed to be a daily way of life - and death. Friends and neighbours died as these bombs smashed their lives into smithereens - but OUR life just went on.
One was either lucky or unlucky. All pretty pointless. Why worry about it.
Life's a lottery. If you wake up next morning then you've got a winning ticket. If you DON'T wake up next day ... well, you've lost what we call life.
That's life!

Very curiously, Indians and Pakistanis dont live in this kind of fear even though both nations are arch rivals and already fought THREE wars and both are nuclear armed.

It is scary this. I was only 4, but can imagine what it must have been like.

If they had blown the world up back then in 1962, I would have been less than 6 weeks old. I would have been pissed to have missed the next 50 years and counting. Do we really love our children? We don't show it from our actions.

Here is the thoughts that Robert McNamara, US Secretary of Defense, had regarding the crises:

"I can recall leaving the White House after it had been decided which message to reply to and after the reply had been drafted and approved by the President, and it was being sent out. It was a Saturday evening. I can remember the sunset. We left about the time the sun was setting in October, and I, at least, was so uncertain as to whether the Soviets would accept [our offer] that I wondered if I'd ever see another Saturday sunset like that."
—Robert S. McNamara, 1983, recalling the final evening of the Cuban missile crisis

Very scary time. Yet in some ways a saner time than now. Yes world leaders could stare each other down, but you didn't have the constant litany of large terrorist strikes that we have now. The whole world may have been in jeopardy, but nobody was flying planes into sky scrapers or bombing commuter trains and subways.

I will never forget that. My family was driving from California to North Carolina - my military officer's new duty station - in a Volkswagen with no radio.

I spent years terrified any time a siren sounded.