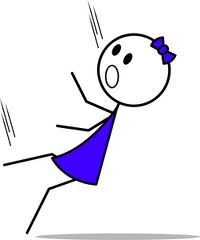 It has occurred to me recently that I have reached the tender age where falling is probably very dangerous and possibly even fatal.  I remember when I was about eight or nine, the mother of one of my friends fell and hit her head on the side of a garbage can.   She brushed it off as nothing, until a few hours later she became very ill and lost consciousness.  She was rushed to hospital, but never regained consciousness and passed away a week later.  At the time, I thought she was very, very old.  She was 34.  Falls can be deadly at any age, and according to the Centers for Disease Control and Prevention, 230,000 workers are injured, some fatally, due to trips, slips and falls each year.  Even children can be injured or killed by falls.  The majority of falls, however, happen in the home.  The most common place for falls?  Your kitchen, bedroom or bathroom. 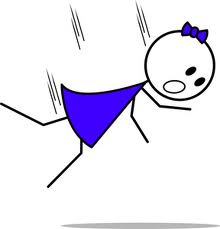 Last weekend I was watering the plants on my terrace.  Just as I was stepping over the sill, with a full watering can in my hand, my foot caught on the sill.  In what seemed like slow motion, I headed face-first towards the big, heavy Adirondack chairs.  I managed to twist to the side so I didn't hit head-on, and the arm of the chair left a distinct mark on my cheek, from my ear to my chin.  I landed on my right arm, still holding the full watering can in my left hand.  Not a drop of water spilled.  I managed to pull myself together, albeit a bit shaky, and carried on with my day.  For a couple of days I felt fine.  And then on Wednesday it hit me with a whammy.  I had injured myself much more seriously than I had realized, and my injuries were talking to me.  A lot. 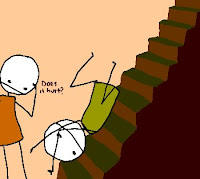 At first I thought it was just a bruise, but there was nothing there.  It was deep inside, and it hurt to cough, sneeze ... breathe.  I couldn't sit up and I couldn't lie down.  Going to the bathroom ... well, we won't even go there.  That's when I discovered that a heating pad and drugs -- lots and lots of drugs -- were my friend.  The nurses where I work gave me some very special over-the-counter pain killers.  I was immobile -- and stoned.  But not in pain.  At least, not until the drugs wore off.  My philosophy has always been that if something lasts for more than three or four days, it's time to see a doctor.  Thankfully, this morning I got out of bed, went to put my slippers on and felt something go *pop* in my back.  And then the pain was gone.  I am now pain-free and drug-free.

This has been quite the summer for being wounded in my home.  I was stung four times by wasps, I burned my hand on the convection oven, I stubbed my toe on my heavy leather chesterfield, and I tripped and went flying on my balcony.

By very, very careful out there.  Home can be a dangerous place.
Posted by Jo at 6:56 PM

There are some very good exercises for balance. Just standing on one foot while your brushing your teeth is a starter. Practice walking sideways and backwards...
Advice from an 80 year old elder.

Yikes! my house has slowly and methodically been trying to knock me off for several years...I'm afraid to leave or come back, I don't know what it has in store for me next! Take care Jo.

I'm sorry you were hurt but glad you're finally feeling better. My mother always said that I was a klutz because while I looked graceful (she said,) I was constantly falling and being hit by door jambs and dropping telephones on my head. Flip said that I was at war with the physical world. So it sounds as if we have yet another thing in common.

A worthy reminder! Thanks

I'm sorry the summer has been so hard on you! I've had my share of falls because I have weak ankles. Take Blue Ridge Mountain's excercise advice and also try going up and down on your toes, while holding onto something strong like your bureau as if it were a ballet bar. You stay safe!

I'm happy your feeling better and that it wasn't more serious. Falls can be dangerous and scary!

Jeez, Josie! It's a good thing there's a railing on your deck...you might have gone right over! I can't imagine the pain you were in - a rib or vertebrae out of whack from the fall??? Good to hear you're better.

Glad your disc popped back into place. But in your litany of injury you forgot the neighbor noise. that is soul killing. what ever happened with that anyhow?

Wow. I know that falls can be dangerous at any age. To hear of how much you suffered without going to the doctor... I am glad to learn that you are better. I hurt myself falling on hikes now and then, but the bumps and bruises always get better. Our bodies can take a lot of abuse but our heads (and brains) can't. You are lucky you twisted the way you did, even if it threw your back out so badly.

A few years ago I was rushing around the kitchen (we'd just found out my mother-in-law had been in a car accident), dropped a can of soda, which burst open & then I slipped in the wet & landed WHOMP on my considerable behind. You would have thought that the padding would have saved me, but I broke my tail bone - & then sat in a car for 8 hours the next day to go be with my husband's family at the hospital. An ice pack would have been good, but I didn't even think about it - just sort of sat sideways. For months. Sigh.

So, yes, falling is scary! Glad you're feeling better now.

You poor thing and you're so right. I was SO, SO lucky when I broke my neck and back last year. The surgeon put me back together but I could so easily have been lying dead out on the moors.

Cold, always cold ,applied to the affected part, does the work, and there's no need for drugs.

Glad you had all your medical firends helping out. Take care. It sounds like you live in a hazardous zone! As for me, I had that one bad fall in the bathroom.

I used to take my balance for granted. Now my ankles are untrustworthy. I pay attention to every step I take - whether on a stair, on a hike or on a curb. Once I started paying attention, I stopped falling. So far.

So sorry this happened to you Jo. I am glad you're feeling better now.

It is very scary to take a tumble like that.

Oh Jo ! I am very sorry to hear you hurt yourself.
Like Blue Ridge and Mary Anne said there are things you can do to lessen the liklihood of falling .

One I was advised to do that is really simple, is to get one of the large exercise balls and sit on it regularily for exapmple to watch TV , use the computer or while doing boring things like folding laundry. The small muscles that it takes to stay erect and to corrrect your balance as you use it are the muscles that we use to correct ourself when we begin to slip or over-reach and lose balance. By activating them through the use of the ball you are more able to correct a misstep or stumble and avoid serious injury. And just sitting on the ball and bouncing is the best fun and old child can have without getting herself into trouble- this advice came from my physiotherapist by the way.