I Live In Lotusland 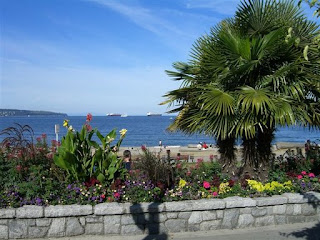 In exactly one year from now the world will be coming to Vancouver for the 2010 Winter Olympics, and I hope when folks come here they won't be disappointed to see palm trees instead of igloos. And there are no herds of moose (meese?) walking down the main streets. Vancouver is a very cosmopolitan city, and we wear Jimmy Choos, not snow shoes. I know everyone imagines Canada to be the land of ice and snow, but Vancouver has palm trees -- lots of them. The photos on this page were all taken by me. My favorite part of the city is English Bay in the West End, and this is one of the many (many) palm trees lining the bay. 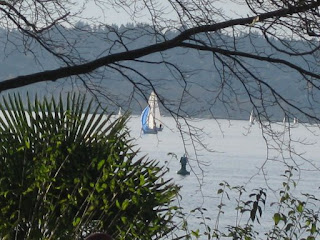 A few weeks ago my friend Leslie and I went for lunch at the Boathouse Restaurant on English Bay. I took this photograph through the windows of the restaurant. I happened to glance out the window just as this sailboat passed by, perfectly framed by the trees and the palm trees, and I snapped the picture. This picture was taken at the beginning of December 2008, but it almost looks like a summer's day. In fact, the bay was filled with sailboats, and if you look closely you can see several more. 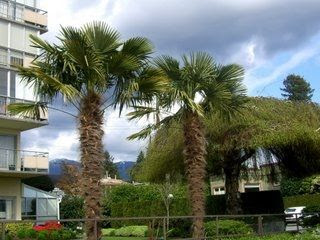 This last picture was taken just across English Bay in West Vancouver at an area called Dundarave. It looks like Hawaii, doesn't it? I have been to Hawaii, and I think this photo looks just like Hawaii. Well, actually, we do get mild, tropical weather from Hawaii here in Vancouver. We often have a weather system known as the Pineapple Express, and it brings warm, mild weather when it visits. It can also bring a lot of rain (*sigh*) but, well, this is the rainforest.

If you're at all interested, sometime I will tell you all about our desert, complete with cacti, sagebrush and rattlesnakes. In fact, I once had an encounter with a rattlesnake, but that's a story for another day.
Posted by Jo at 7:51 AM

I admit I hadn't been to your blog yet but I'm a follower now, I saw it on blogs of note. You keep saying you are not a writer but you write VERY well. Thanks for taking me away from my mundane world for awhile which is why we all read blogs and write them perhaps?

Ok...palm trees, sunshine, sailing in December? I'm ready for a trip to Vancouver. I'm so sick of the cold and constant snow in the Chicago area this year, I could just scream! Oh wait...that was your last post.

Thanks for the beautiful pictures, it helps me to remember what sunshine and flowers look like.

Thanks for reminding a fellow Vancouverite of the presence of palm trees in the city! Love your blog -- glad I found it on Blogger's blogs of note.

Palm trees that far north is a curious thing. I live sixtymiles from California, the land of palm trees, and was surprised to see Oregon with an abundance of palm trees also. I guess the Pineapple express is real. Do you get much rain?

I'm pretty new to this blogging thing as I've heard mainly of angst-ridden teens expressing themselves in depressing blogs, so it's a relief and a breath of fresh air to read something so upbeat and interesting! I found your blog on blogs of note, and I'm excited to read more of your posts!
Thanks for making my day that much brighter :)

I live in Tillamook, Oregon (on the coast) and we have palm trees too. This confounded me when I first moved here from Milwaukee, but now I would like to have a few of my own.

We hope to visit your fair city this summer!

Hi Josie, Oklahoma has a few banana trees but no palm trees. Come to OK and you can have all the rattlesnake encounters you want! I'd love to live in Vancouver! ~Liz

Wonderful description of LA-LA land North. Surely God's country in the summer.
But honestly, just this month, did they check the palms' nuts for freezer burn? :)

Vancouver is on my list of places to visit one day. To add to it I have friends who emigrated there a couple of years ago whom I would like to visit so badly. And maybe we will bump into each other. One day...

Anyhow, I life in South Africa (as you know). People think we live in huts, have wild animals roam the streets and get to work on horseback. Far from it. South Africa is a modern country with cosmopolitan cities. It is a world in one country with spectacular scenery and so much to do. And most animals live in game reserves, so you won't have to dodge lions while driving to work in your car from you house. LOL. It is amazing how people imagine places. Preconceptions, ha...

Beautiful pictures. I want to visit your city now!

I used to live in Lotusland and your post has made me consider a return. The maritimes interest me but the weather reports are daunting after 15 years in Portland, OR.

I followed Mary Ellen's links to your blog and I must say I'm very impressed by your style and content. I'll come back.

We went with another couple on vacation to Canada in September. We spent two weeks just touring. We were so impressed! Vancouver is absolutely beautiful as is, BC! You are very lucky to live in such a wonderful place. We also loved all the nice people!

I live in southwestern Ontario and my husband and I have been out to BC a couple of times, including Vancouver, Victoria, White Rock, Surrey, Chilliwack and Kelowna. I am searching for some gainful employment and am seriously considering moving West. We love it out there! But you know, I never knew they had palm trees either! Thanks for the info.

My husband lived in Chilliwack for a few months back in 2004, but it was in the fall and he got really sick of all the rain really quickly. And when the job didn't work out he hightailed it home. We came thisclose to moving out there once before back then.

My Phoenix, Arizona high school band spent a week in Vancouver and a day at Victoria Island. I will never forget how beautiful it was. Totem Poles galore, Capilano Suspension Bridge, Grouse Mountain (had the fog just like in your pic today), Butchart Gardens, Victoria (so much to see there), Chinatown--all these memories just off the top of my head.

I also remember in Vancouver how CLEAN and well maintained it looked and how all the lawns I saw were gorgeous. You could tell people there take a lot of pride in their lawns--flowers everywhere.

Our band stayed at the dorms at UBC, so I easily saw the ocean, a first for me. I hope to return again someday!

I don't remember seeing any palm trees back then (late Spring'78).
You know better than me, but I doubt the palms are native to BC. Of course they are easy to grow and not much of a root system and are brought into many cities, where they aren't native plants. When the trees die, they just get replaced again very quickly.

I also lived in Las Vegas, and there are millions of palm trees there too. Every single one of them were brought there from somewhere else!

Anyway, point being, no doubt Vancouver is one of most beautiful places on earth. Glad to have a blogger there as good as you. Thanks!

And now I'm in Illinois near Springfield (that doesn't make me Obama's biggest fan--I was a big Hillary supporter). No beauty in corn fields and soybean fields!

Lovely pictures, especially the palm trees....Once upon a time? there my old house, the garden has 3 palm trees(2-3 metre tall,alike these pics)....One day, my father gave it one to the famouse a painter in here...Anyway they can be my a sweet memory in my childhood....love to read it...love to Vancouver.....