A New Year, A New Calendar 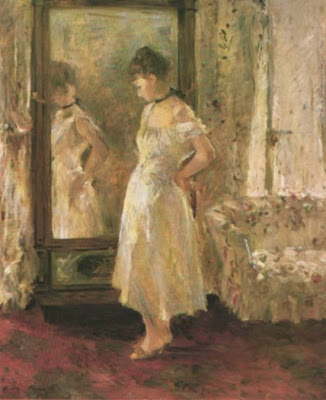 I'm not overly fond of New Year's Eve celebrations, and I celebrate the New Year by getting up early on New Year's Day and greeting the day. One of my favorite things to do is to take down the old calendar and put up the new. I look at the fresh, clean pages and wonder what the months ahead have in store. Usually - at least most of the time - we can choose how we fill those pages. Two 21st Century "buzzwords" are proactive and reactive, and we can truly be proactive as much as possible about how our days will unfold. If we proceed with inertia and sluggishness, our days will be filled reactively rather than proactively. I think we all tend to go through the "coulda, shoulda, woulda" phase occasionally, but somehow New Year's Day has the promise of "can, shall, will" - don't you think? I never make New Year's resolutions, because they usually don't last until much past noon, but I do like the fresh, clean pages of a new calendar and a new year.

My calendar this year was one of my Christmas gifts from my family, and it is a wonderful calendar of female Impressionist painters. These paintings are by Berthe Morisot, who was a friend of Edouard Manet, and in fact she married his brother, Eugène. 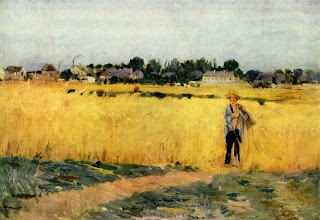 I think this painting is easily as wonderful as anything painted by Vincent van Gogh, who came along later. Berthe Morisot was a member of the circle of painters in Paris who became known as the Impressionists. Undervalued for over a century, possibly because she was a woman, she is now considered among the first league of Impressionist painters. Although traditionally Manet has been related as the master and Morisot as the follower, there is evidence that their relationship was a reciprocating one.[3] Morisot had developed her own distinctive artistic style. Records of paintings show Manet's approval and appreciation of certain stylistic and compositional decisions that Morisot originated. He incorporated some of these characteristics into his own work.

You can read more about Berthe Morisot here and see more of her paintings here.

With the passing of another year, we all hear that loud ching as the clock ticks ahead. I hope you all go out and make it a wonderful new year. And remember, look ahead, not back. Last year's calendar has been filed away.
Posted by Jo at 8:47 AM

I learn so much about art from your blog!

Have a wonderful new year, Josie!

Glad to see you back and quickly recovered from your injury~
Happy New Year. I like all the blank pages, too.

Happy New Year, JO! So sorry for the long absence, I have a good reason...really! Thanks so much for stopping by at my blog and you were among the firsts that I wanted to wish a wonderful New Year. I'm sorry I missed telling you Merry Christmas, also.

Ahh...the calendar! Like you, I love to open a new calendar. I give one to each of my children and grandchildren for Christmas every year. Each one is given a calendar that fits their personality and interests.

I hope your calendar is filled with happy occasions and year that is chuck full of good health.

All the best to you, dear friend.

Your advice is just the thing that I need to be reminded of as I tend to do the whatif, shouldhave routine. Have a good start to your blank calendar.

I'm sure looking forward to 2009...getting my back fixed and having a new man in my life will be the highlights. Anything else is just a cherry on top.

I love how you manage to bring art into your posts - I sure appreciate this woman impressionist's art - I learned about her when I was teaching my little grade 4 kids about that particular style of painting.

I get my Calendar from the plumbing company. 13 pictures of things they could fix for me. If they would have included the diagrams in the pictures, my wife would fix it instead of having to hire it out.

In my world the impression is, and it's mostly true, the females take the lead and are second to none.

I love Impressionist art and saw many artists' work, female and male on past trips to Boston and New York. Thanks for sharing, and a very Happy New Year to you, Jo. :)

Thanks Jo for posting something so inspiring and motivating. It is always good to kick start our mornings with elevating stuff like this. Keep it up!

I went to the site you provided for Berthe Morisot and enjoyed the images. I especially liked one she did in 1874 called The Butterfly Hunt.

You are right about looking ahead in life and not back. Sort of like the old saying that is why God put eyes on the FRONT of your head! When a person looks back it is easy to wash over the sharp edges and see things in a very mellow way.

Real life is not airbrushed - it is full of all the sharp edges and flaws as well as beautiful aspects. Your words are full of wisdom.

Take care and I hope you have a wonderful new year!

What a wonderful calendar....Happy New Years to you my friend like you I am not one for resolutions...

I hope your year holds nothing but wonderful happenings for you....all the best...

I learn so much about art from your blog!

Yes, I'm filing away last year's "calendar" as well. Keeping a few scraps and pages but not many. Lizzy is convincing me to make the Past be the Past and only look forward. D

OH by the way...I am glad to see you are up and mobile...how wonderful of Russel to make the post about your unfortunate fall....I hope you are on the mend...and not to many bruises....gosh....why were't those sidewalks cleared....

Ah my early morning of strange associations, jogged in part by your blog.
Glad it's a new year. No more gloomy thoughs.

Yes, women and art in Manet's time.
--and curious that today you speak of Bertha Morisot and in my own blog today, I speak of Alanis Morisette, the singer, another kind of artist.
Artistic jealousy on the men's side.
Makes me mangle a quote by somebody somewhere.

Love is a perky elf dancing a merry little jig and then suddenly he turns on you with a miniature machine gun.

Was it Monet (not Manet) who once said "Some days I just want to pick up a machine gun and just shoot everybody."

Oh my (darling?) Columbine!
Grotesque.
But Monet, a comtemporary of his near-namesake, kept seeing himself a failure, which he was not, and would never actually pick up that machine gun..Didn't have to, llke those punks.
That kind of horrible performance art was not for him, though he seemed to often think about it.

I've been getting caught up here this morning, but I can see I have some more reading to do before I ask about some of the picture (photos) on your blog!

Hi Jo. Just got back from our holiday and wanted to check up on my fav bloggers. Sorry I missed your birthday (and Christmas and New Year) so here goes.
Merry Christmas
Happy Birthday
Happy New Year.
May the year ahead be filled with lots of joy and happyness and off cause loads of blog posts.
We'll chat later

Happy New Year, Josie. I studied art in college and thanks to you, I'm still learning stuff I never knew! I love the Impressionists. ~Liz

Happy New Year, everyone! I am now just catching up on my blogging. See you soon!