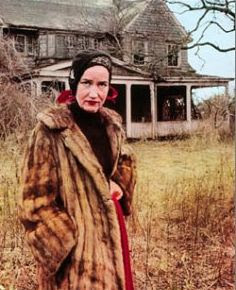 If this face of the woman in this picture looks vaguely familiar, with the wide set-apart eyes and the strong mouth, it is because she is the first cousin of Jacqueline Bouvier Kennedy. Her name is Edith Bouvier Beale ("Little Edie"), and her story is a fascinating one. The story of her life and her mother's life ("Big Edie") has been made into a movie called "Grey Gardens", starring Jessica Lang and Drew Barrymore. I have seen a trailer of the movie, and in my opinion, Jessica Lange may be looking at an Oscar for her uncanny portrayal of "Big Edie". 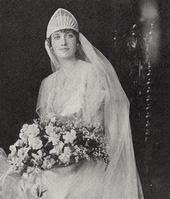 "Big Edie", Edith Ewing Bouvier Beale, was Jacqueline Bouvier Kennedy's aunt -- she and Jacqueline's father were brother and sister. Edie came from a wealthy family, married a wealthy financier, Phelan Beale, and their lavish wedding took place in St. Patrick's Cathedral in New York. Edie and her husband had three children, two sons - Phelan and Bouvier, and a daughter, "Little Edie". In 1946 "Big Edie's" husband sent her a telegram from Mexico, announcing he and "Big Edie" were now divorced. She always referred to it as her "fake Mexican divorce". Her husband provided child support, but no alimony for her, and her 14 room mansion became run-down and decrepit. 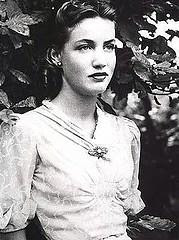 "Big Edie's daughter, "Little Edie" had been a great beauty, and was presented at the debutante ball on New Year's Day in 1936. She was equally as beautiful, talented and well-educated as her famous cousin Jacqueline -- you can see a strong family resemblance in this photograph. However, life had not been as kind to "Little Edie", and in 1952 she returned to live with her mother at Grey Gardens in East Hampton. In 1972 the health department raided Grey Gardens because "Big Edie" and "Little Edie" were living in squalor, their house filled with garbage and filth, with over 40 feral cats, several raccoons, fleas and no running water. Jacqueline Kennedy, her sister Lee Radziwill, and Jacqueline's husband Aristotle Onassis helped to clean up Grey Gardens, fix the water and heating systems, and have 1,000 bags of garbage carted away. After the raids on their property, "Big Edie" and "Little Edie" never left Grey Gardens while they lived there. In 1975 a documentary was made of their life at Grey Gardens. I have seen the documentary, and it is fascinating. 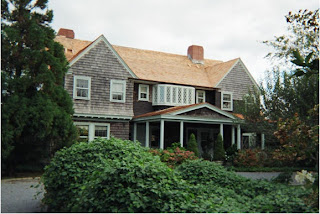 Grey Gardens is a magnificent house, designed in 1897 by Joseph Greenleaf Thorpe, and purchased in 1923 by "Big Edie" and her husband. "Big Edie" died in 1977 and "Little Edie" sold the house in 1979 to former Washington Post editor Ben Bradlee and his wife, Sally Quinn. According to a 2003 article in Town & Country, the building and grounds have been completely restored. Philanthropist Frances Hayward currently rents the home 11 months out of the year from the Bradlees. "Little Edie" died in 2002 at the age of 84. ... Wikipedia

The movie is being released today on HBO, and it looks wonderful. However, if you ever get the opportunity to see the documentary, you will be amazed. The so-called upper echelon of society can certain produce some eccentric folks, and these two fill that bill, but they are also eminently likeable.
Posted by Jo at 10:56 AM

I look forward to seeing the movie! I love Drew Barrymore. I do remember my husband telling me something about that family a few years ago, but I had no idea how bad off the two ladies were.

I am embarassed to admit that I had never heard of "Big Edie" and "Little Edie" before. This is a fascinating story and I want to see the documentary and the movie.

I'd never heard of these two before either, but now I'm completely intrigued. Thanks Jo - I'll have to go see the movie.

I saw the documentary and it was pretty amazing. They are pair.

"Grey Gardens" is a guilty pleasure movie that my sisters and I share. I think we have seen it hundreds of times on A&E. We riff off quotes from it every once in a while, especially if one of us is whining...

"Will you shut up? It's a goddamn beautiful day, shut up!" - Big Edie

I love the roughness and the quirky behaviour of the documentary, I don't think that can be duplicated in the film, but I look forward to the movie.

I saw the trailers for this film and it looks really good-I'm going to try and see it.

I watched the movie tonight and thought it was very good. Now I am off to start watching the documentary this weekend too.
Joyce

Oooh, you made this sound fabulous! I'm going to watch for it.

I admit I have never heard of them before,but you made it sound so intriguing,I really want to watch the movie and the documentary...I wonder what were the circumstances which forced them to live in such terrible conditions,or was it nothing in particular...I think I'm going to google them for a bit.
Thanks agian for an interssting post,JO!

I saw an advertisement for the movie today but now I will definitely go and se it. Thanks for the great post. It sounds a fascinating story. What a beautiful girl little Edie was too.

For the love of HBO - I'll be watching.

I was fixated by the previews of this story and tivo'd the movie last night. Although I haven't watched it just yet, I appreciated the post.
Thanks, Jo!

I will have to watch both the documentary and the movie. I love that kind of stuff.

I can't wait to see this movie.

I definitely want to see both the movie and the documentary - I find the lives of quirky people really interesting!

I watched the movie on HBO last night. The eccentric devotion, sad reliance and love these two had between each other was fascinating. I cannot wait to see the documentary.

I watched the movie on HBO last night. The eccentric devotion, sad reliance and love these two had between each other was fascinating. I cannot wait to see the documentary.

I was told right after filming of the HBO film wrapped up in the fall of 2007, that I would be blown away at the last scene, where Edie sings Tea For Two at Reno Sweeny, and I was ! I had supplied the film company with the only recording in existence of Edie singing the tune, only this wasn't from her actual performance at the club, but rather her singing it just for me at one of my many visits to Grey Gardens. Drew sang it exactly, phrase for phrase as I have it on tape. Edie and I actually met that night at Reno Sweeny, and my relationship with Grey Gardens has now spanned over 3 decades. For our complete review, check out our blog at MyGreyGardens.com (HBO film review by Robb Brawn & Lee Arboreen), and be sure to check our Youtube video uploaded 4/18/09 the same day as the HBO film release. Click
GREY GARDENS PROMO to view the video

I watched both the 2009 movie and the 1975 documentary and they were fascninating. Drew Barrymore and Jessica Lange cast as the daughter and mother were brilliant, although I was a little put off by Drew's accent in the film. It was a little distracting. However, these two were perfect to play mother and daughter and they even somewhat resemble each other. I watched the movie first and then the documentary and was very impressed at how well the actresses, particulary Drew Barrymore portrayed the movements and body language of the two Edies. Thanks for the tip. I probably never would have watched it otherwise.