History of The Stanley Cup 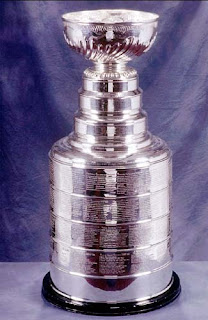 I'm not an avid sports fan, but I am a fan of history, and the history behind the Stanley Cup is very interesting. The Stanley Cup is one-of-a-kind, and each year the winning team has the name of the players, coaches, management, and club staff engraved on its chalice. Unlike the trophies awarded by the other three major professional sports leagues of North America, a new Stanley Cup is not made each year; cup winners keep it until a new champion team win it. The Stanley Cup is the oldest professional sports trophy in North America, and it is Canadian. It was first donated in 1892 by Canada's Governor General, Lord Stanley.

Lord Stanley was appointed by Queen Victoria to be the Governor General of Canada, and he was a huge hockey fan. He commissioned the Stanley Cup to be made by silversmiths in Sheffield, England. He had five stipulations with the cup created in his name:

1. The winners shall return the Cup in good order when required by the trustees so that it may be handed over to any other team which may win it.
2. Each winning team, at its own expense, may have the club name and year engraved on a silver ring fitted on the Cup.
3. The Cup shall remain a challenge cup, and should not become the property of one team, even if won more than once.
4. The trustees shall maintain absolute authority in all situations or disputes over the winner of the Cup.
5. If one of the existing trustees resigns or drops out, the remaining trustee shall nominate a substitute. 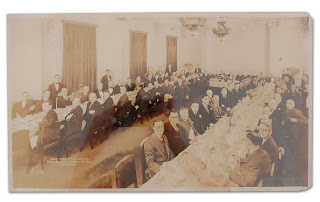 There are actually three Stanley Cups: the original bowl, the authenticated Cup, and the replica at the Hall of Fame. The authenticated version or "Presentation Cup" was created in 1963 by Montreal silversmith Carl Petersen. It is authenticated by the seal of the Hockey Hall of Fame on the bottom of the Cup, which can be seen when winning players lift the Cup over their heads, and it is the one currently awarded to the champions of the playoffs.

In 1994 the Stanley Cup was won by *gasp* the New York Rangers, and it has been in the possession of American teams ever since. In 2004 the Stanley Cup was awarded to the team in Tampa Bay, Florida -- hockey in Florida? -- and in 2007 it was won by the Anaheim Ducks. *sigh* It's time to bring it back to Canada. There is currently a team here in Canada who perhaps may be looking very hopeful. They shall remain nameless, but we all have our fingers crossed.

I saw an interview on tv one time with one of the trustees who said that winners of the cup have done some interesting things with it, including drinking champagne from it, eating spaghetti out of it, and eating cereal out of it. I wish I could remember what show it was, I'd look up the interview. But he seemed to think whatever they did with it was ok as long as they didn't damage it and cleaned it afterwards. Strange history there!

Scarlethue, yes, I saw that too. And members of the Anaheim Ducks let their dogs drink out of it. Okay, I like dogs, but I think folks should show some respect for the Stanley Cup.

Oh my goodness! I haven't been following hockey for many years - until THIS year! Well, naturally, having a former pro hockey player as a fiance now sort of seals the deal. And YES!!! PULEEEZ...bring the cup home to Vancouver! There is every possibility this year so we all have our fingers and toes crossed!

I have never been to a Hockey game and was unaware that Washington had a hockey team until they built a new arena. Carey is a huge hockey fan because her father was Canadian and I think you all have to been hockey fans by Canadian law don't you? Anyway, I am going to go to a game this year just to see what it is like.

Yes, the Cup belongs in Canada!!

The idea of hockey in Florida, Texas or California just seems strange to me. I don't mind hockey teams in Boston, New York, Buffalo, Minneapolis -- but Miami or Dallas??!

Oh well.... I guess it all comes down to money but, to me, hockey is Canadian - period.

The states have baseball. Europe and South America have soccer. But American hockey teams, well....!

Leslie, wouldn't it be great to have the Stanley Cup back in Vancouver in time for the 2010 Winter Olympics!?

Cedar, *heh* yes -- hockey is genetically programmed into us. We are all born with teeny, tiny ice skates.

Russell, hockey is Canadian. It was invented by a Canadian. It is a sacrilege to have the Stanley Cup out of the country! Argh. :-)

Jo, the Stanley cup is about history and achievement, but for me it is also about the basic concept of competition and winning, which, I think, are “inground.”

Different cultures have their different notions of how to win -- whether singly or as a group effort -- but the notion is winning.

Your desire to have the Stanley cup go back to Canada is part of the spirit that is the strength of Canada.

As for me, I would like for the United States to keep the Stanley cup basically because, well, I am am American living here. To want to hand it back to Canada or to lose it to Canada is not my idea of a lot of fun. *heheh*

I don't play sports much because I was never so inclined, and now I am physically inclined thru my spine to watch from the sidelines.

Although I like watching the Super Bowl, the sport that goes all the way back to my childhood is BOXING because my dad watched it, and when he did, the whole family draped over the sofa or lay on the floor to watch. In my childhood the names Marciano, Graziano, Patterson, Joe Louis, etc, all meant something to me.

Sayyy, I think I will write a post about BOXING and return to my childhood.

But the Stanley cup: May we all strive to win it and keep it.

I loved the history; of course it caught my eye since I've been a Red Wings fan ever since I was a kid.

I've got the 'back-to-back' shirts from their wins of the Stanly Cup as well as last year's win - wear that nifty shirt when I go gambling (playing Keno), and play all the Red Wings' numbers on the Keno screen.

I think I've probably won about $24,000 just on the Red Wing's numbers all coming up at the same time on the Keno machine, so aside from loving them as well as all my kids feeling the same, I gotta keep with them because they give me some extra 'spending money'.

It is wonderful how such a tradition can just go on and on. Funny how such traditions are only really found in sport

Interesting.Butwhat Scarlethue said disgusted me...how could someone do that to something as prestigious as the Stanley cup?

Interesting post! I never knew all those facts about the Stanley Cup. I hope your wish comes true... it's about time that we share! ;-)

If you've been watching this year's play-offs, then you know the Red Wings took out the Ducks and won their first game with the Chicago Blackhawks.

Very good games; the Red Wings have a chance of doing a back-to-back again this year!