The Priests ... I Love These Guys! 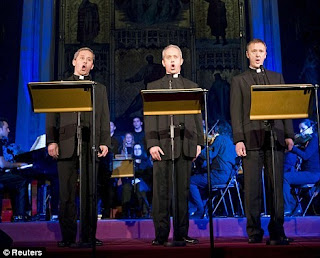 I have only recently discovered these three wonderful Irish tenors, and I am gobsmacked. They are Catholic priests with voices like angels. I watched the PBS program of their performance at Armagh Cathedral, and I loved them. These wonderful singers have even been on Regis and Kelly, for goodness sake. Where have I been? They are practicing priests in Northern Ireland, and they have been singing together since they were students at students at St MacNissi's College. Two of them are brothers.

• Father Eugene O’Hagan is Administrator of the Parish of Ballyclare and Ballygowan with two churches: The Church of The Sacred Heart and the Church of The Holy Family, Diocese of Down and Connor.

• Father Martin O’Hagan is Parish Priest of the Parish of Cushendun with two churches: The Church of St. Patrick (Craigagh) and the Church of St. Mary, The Star of the Sea (Culraney), Diocese of Down and Connor.

• Father David Delargy is Parish Priest of the Parish of Hannahstown with two churches: The Church of St. Joseph and the Church of St. Peter, the Rock, Diocese of Down and Connor.

They have recorded one CD which was released in November 2008, and it made the Guinness Book of World Records for the fastest-selling UK debut for a classical act. Quelle surprise! They are wonderful. Their music is mostly classical and Irish ballads – you should hear them sing “Funiculì, Funiculà” and “Danny Boy” -- but they also sing other music as well, and are listed as “alternative rock”. I like that. These priests rock. And what beautiful voices they have. Here they are singing the "Irish Blessings".

Oh Jo..... I will probably email something about this tonight, but for now, I want to say that “Danny boy,” is one of those songs that can make me cry. When I was very little, my parents both loved it. You mentioned it and it dredged up emotion.....

When good voice is combined with Faith - the combination is a delight to the ears, and uplifts the spirit.

I think it's wonderful that the musical talent of men of the cloth is being recognised in this secular age :)

I've never heard of them. I'll have to let my mom know. She was a big fan of the Three Tenors... but she probably already knows. Me, I have some sort of defective music gene. I don't follow any kind of music or really listen to music or seek out music. I don't understand it.

Jo that is so beautiful!! thank you.

Fabulous! I've never heard of them, either. What is the name of their CD?

I have heard them sing before. They are amazing!

Me too - Danny Boy is a tear jerker. I have never heard of them either. Thanks for tellin gus about them. Love the Irish!!

Thanks Jo, the Irish Blessings song is one of my favourites. I am fascinated about anything Irish. It is a beautiful land with beautiful people with a sad history. One of the places I am definitely visiting when I win the Lotto!

A silent bow is what I have to offer you for that post of you.
And yes, right, am a proud father of a twenty months old boy who keeps me from time to time awake a whole night.

Aren't they just wonderful! My husband, Irish born 100% introduced me to their music and I have loved them ever since! If you enjoy Irish music, you may also like Celtic Woman, they are wonderful as well!

Wow, these guys are pretty good. never heard of them before.

They are amazing. Beautiful voices. I just encountered your beautiful art. They are so delicate and colourful. Have you ever entertained the idea of illustrating children's books? You are very good.

They're great! I'll have to keep my eye open for their appearance on PBS here. Thanks for sharing Jo!!

Oh Jo. *sigh* It was emotional for me as well. It's lovely and gave me a tingle. But more than that, my mother had this blessing on a plaque hanging in the kitchen throughout my entire childhood. After she died my father remodeled the kitchen but I noticed when I was there last July, he hung the plaque right back where it belonged. She would have loved this and this group.