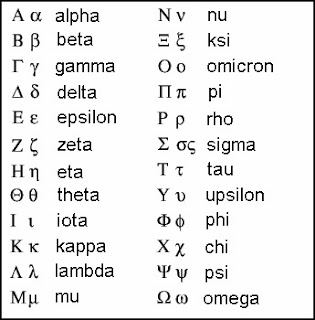 The other day one of the Munchkins and I were chatting, and he said, "I went to the library and took out some books and CDs, and I have decided to teach myself Greek." What a character. He was describing to me the Greek alphabet, and what each letter does, and I found it so interesting. I would think Greek would be a particularly difficult language to learn because the Greek alphabet is so different from the English alphabet. Well, it's all Greek to me -- but it's fascinating. I love languages, and the more languages a person learns, the easier it is to learn other languages. They're all inter-connected, and reflect the flow of humanity across the globe. 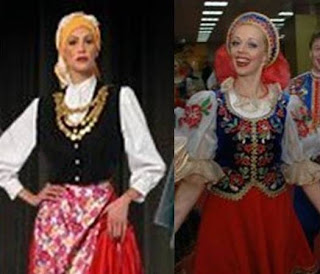 After a few minutes, our conversation sort of went off on a different tangent, as our conversations often do, and we began talking about the similarities between the Greek and Russian cultures. I have always found them to be similar. Can you tell me in this picture, which costume is Russian and which is Greek? I have always found them to be similar. Their religions are Greek and Russian Orthodox, their music and musical instruments are similar, many of their foods are similar, some of their ethnic costumes are similar, and even some of their dances. I believe the answer to the similaries lies in the Byzantine era, which was the beginning of Orthodox Christianity in Greece, the Balkans and Russia. Now my curiosity is piqued, and I might pay my own visit to the library to learn more about this.

Here is the wonderful Igor Moiseyev Ballet company from Moscow performing the Greek Sirtaki. The dance is not a traditional Greek folk dance, but was created specifically for the movie "Zorbá the Greek" in 1964, and it is also called Zorbá's dance. Now more than anything else, we associate it with Greece. Have you ever gone to a Greek restaurant, had just a wee bit too much Ouzo and danced the Sirtaki? If not, you should try it sometime -- it's lots of fun.

Let me guess: on the left is Greek and on the right is Russian?

A friend of mine has been to Russia several times and loves it there - still has many friends she keeps in touch with, too. I'm hoping to visit some of the Greek Isles some day and revel in the sunshine. Have you ever seen the move "Shirley Valentine"?

Apart from the religion, I'm not sure that I can detect many similarities between the Greeks and the Russians (food-wise, Greek cuisine is very Mediterranean, whereas Russian is more northern, which makes sense). But it is true that Cyrillic alphabet was loosely based on the Greek one.

I've never really thought of the similarities, thanks for pointing that out.

I'm always confused by the Greek alphabet, what little I know is from reading the names of college sororities.

Oh, Jo (and anyone else interested)...FWIW...I put up another Shakespearean post on my blog--this one about our President. You might enjoy it. ;-)

I had a neighbor a few years back that was Greek. Let me tell you, she had the biggest mouth and her Greek cooking was awful. She was my first impression of Greek, and I have been soured by their culture and personalities ever since. I did however like My Big Fat Greek Wedding. I'm told they really are like that....lol, oh well that's just my opinion.

Before uou even breathe, start whistling the theme song from ”Twilight Zone.“

I loved studying English as a child (to the point of learning acquiring the habit of spelling words backwards just for fun).

Then when high school rolled around, I began Spanish, which I loved more than any other class, period.And the teacher, who actually ended up looking like my second husband, was excellent at his profession.

I entered college and continued Spanish and then met the young man whom I eventually married, after his stint at Columbia University, but I am getting ahead of myself. In college I began my second language, French. I loved it. Still can recite ”The Grasshopper and the Ant.“

Then I met that young man and we began dating. At about that time I was yearning to start learning another language, but it had to not be another Romance language. I wanted something different.

I finally settled on three options of languages wildly different from Spanish and French: They were Arabic, Greek, or Russian.

The young man who had by then become my boyfriend was a Politial Science major with a focus on Russian Studies, so I decided on Russian. Ultimately I graduated U.C.L.A. with a major in Spanish and a triple minor in English, Russian, and French;

I have never traveled outside the continental U.S.A. so do not know how it feels to walk the streets of Russia or sip chai in my own dacha, but learning new languages brought me a wealth of understanding of people and cultures.

In fact, knowing Spanish actually subtly confirms my vocabulary in English. While reading something I came across the word “lachrymose” which I knew more or less, but which I was able to pinpoint because of my knowledge of Spanish. “Lagrimoso(a)” in Spanish, “tearful/sad”, based on the noun “lágrima,“ a tear, as in the eye when reading a Shakeaperean sonnet.

And now to make a new slideshow for my blog. Hmmm. maybe about Russian chai. :-)

Jo-- an addendum to my long post above: In spite of learning those languages, I never learned the language of my four grandparents.

Sadly, at the time, Japanese never seemed foreign enough to qualify as a foreign language! 8-(

You have some very cool Munchkins in your life :) What fun to have them around.
I myself love the Greeks and I've had many a night drinking ouzo, dancing and smashing plates in Greek restaurants :D
Have a Happy Day!

Russian dancers (be it Moseev, Kirov, or anyother Balle) perform things to perfection.

As for Greek-Russian similarities, I've recently read about a famous greek anthropologist and tourist guide that claims similarity between greek culture and...chinese culture. And she found herself in big trouble because of this claim of hers.

Blame it on Vladimir the Great of Kievan Rus (Antique Ukrainian and Russian).
A heretofore pagan polyglot of Slavic tribes took a Norseman for a king; he visited Byzantium and was greatly lmpressed...Thought he was in heaven when he visited Byzatium, the pomp, colour and splendour, the rich culture, the church choirs, the incense.
Heretofore wondering if Kievan Rus should turn Hebrew (yes!) like the Bulgar nation next door, or Greek orhodox, he was won over by the impressive empire started by Emperor Constantine. Later came Cyril and Methodius (for some reason not fondly thought-of today by some former Jugoslavians)--and these two now sainted men Gave the Rus---ians an alphabet.
Kievan Rus. Cradle of Russia..

Moved to Greece four years ago, after meeting my wife. Learned the language and obtained even a diploma. Would love to be helpful with any future question. For now it is ΚΑΛΥ ΤΥΧΗ - GOOD LUCK.

I know what you mean about Russia and Greece being similar.

People say the same thing about Iowa and Nebraska...or is that Iowa and South Dakota? Oh well...

Not quite the same, though, is it?! Heh!

Leslie, my friend Sherry has been to Russia too, and she says it's wonderful. I would love to take a cruise around the Greek Isles too!

Jelica, I detect similaries in their music, and other customs as well.

Mary Ellen, I think I notice the similarities mostly in their music, but in other things as well.

Arley, we have a big Greek community here in Vancouver, and they're great! Every year they have Greek Days, and it's tons of fun. They know how to enjoy themselves.

Lorna, omigosh, I think you are my new hero! I would LOVE to be able to study languages like that, and to think that you actually did it is amazing! But it's not too late to learn Japanese. My next door neighbor lived in Japan for two years and she taught me how to say hello. "Ohaiyogozaimasu"TheChicGeek, aren't Greek restaurants just the most fun!? I love them.

DUTA, I read of the similaries between Greek and Chinese, but I didn't know the anthropologist got into trouble for that. Why on earth!?

Ivan, yes! I knew it! The similarities are more than just a coincidence. I am going to read up on this. Thank you for the history lesson.

Mo'ikeha, thank you! I would like to know as much as possible about this. My interest is really piqued now.

Russell, LOL. I thought it was Iowa and Ohio. To be honest, I always used to get them mixed up. :-)

Hi Jo!
I'm from the Balkans (yes, across the ocean, Eastern Europe), and although I've never been to neither Greece nor Russia, I can say they're pretty different.
First, Greek is not Slavon. Russia is. They have different historical roots.
Second, as well noted by Jelica, Greek is more Mediteranean while Russian is more Northern/Slavic.
Also, the mindset and the traditions are quite different.
Indeed, very similar is the religion - they are both Orthodox to the bone.
Umm...I can't think of many historically well equipped arguments here, but my intuition of a local (if you can call Eastern Europe "local") tells me that the two cultures are different.
On the other hand, I'm working in a multinational where we operate by region level. My region is called CEEMEA (Central & Eastern Europe, Middle East & Africa). We go all the way from Russia to South Africa. You wouldn't believe how much we have in common, as a region, opposed to let's say Western Europe or USA.
enjoying diversity ;)
Maria

Children are so amazing, and the younger they are the easier it will be for them to learn that new language. Keep on encouraging him!

My wife and I have a sheet like that with the greek alphabet on it. We use it when we do crossword puzzles together.

It's true, the Russian alphabet (Cyrillic) is loosely based on the Greek, but so is the Roman one. (The one we're using here.) I can sound out Greek text, slowly; the alphabet really isn't so different.

I took three semesters of Russian back in the mid-80s, loved it, and did well. I don't remember much of it now. I've often wished I could go back and study it some more, it's a beautiful language. But one problem I had was that Russian culture never appealed to me -- it's the problem I've had with all the languages I studied until Korean.

I'm not a bit surprised you love languages. Languages are a bit like art. Some of them are melodic, like music. I'd be willing to bet most creative people like to listen to and learn other languages.

When I began reading your post I paused and looked long and hard at the picture of the Greek alphabet that you placed on your page and I thought, "you know - seeing it altogether reminds me of the Russian Cyrillic alphabet." :) I had to learn Russian a few years back and (for me) it was not an easy task. Indeed, there are definite similarities to both cultures in many respects.