Chariots Of Fire On Empire Field... 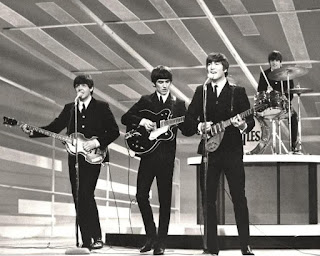 Long before Vancouver hosted the Olympics, the city hosted the 1954 British Empire and Commonwealth Games. Empire Stadium, which was originally built for the Games, held 32,375 people and a decade later was Vancouver's venue for both Elvis Presley and The Beatles. It was also the site of one of the most famous races in history, during the 1954 British Empire Games, between Roger Bannister and John Landy. Both men had beaten the four-minute mark previously. Bannister was the first man to break the four-minute mile on May 6, 1954 at Oxford University, and a month and a half later on June 21, 1954, John Landy also broke the four-minute mile. 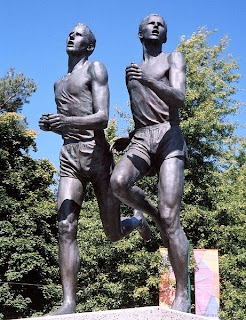 And then on August 7, 1954, as 35,000 fans looked on in the stadium, and millions watched on television, the men competed against each other in what was known as "The Miracle Mile." John Landy had the lead, and with only 90 yards to go, Landy glanced over his left shoulder to look for Bannister. At that instant, Bannister streaked by on Landy's right to win in a time of 3:58:8. Landy's second place finish of 3:59.6 marked the first time the four-minute mile had been broken by two runners in the same race.  A statue of Roger Bannister and John Landy both breaking the four-minute mile stands outside Hastings Park a short distance from the stadium. On a visit to Vancouver years later, Roger Landy said, "While Lot's wife was turned into a pillar of salt for looking back, I am probably the only one ever turned into bronze for looking back."

My father had been a runner when he was a young man, and he talked about that famous race all his life. “If only Landy had not looked over his left shoulder...” 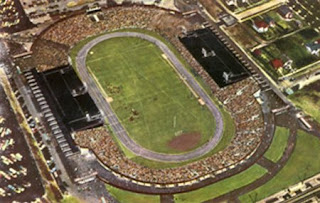 Harold Abrahams, who was one of the runners featured in the movie Chariots of Fire, was the timekeeper for Roger Bannister’s historic four-minute mile at Oxford University on May 6, 1954. Sir Roger Bannister went on to become a physician and neurologist, and John Landy went on to become the Governor of Victoria, in Australia. Empire Stadium has been refurbished, is now called Empire Field, and is home to the BC Lions Football Team. Phinnaeus and his dad went to a game there the other night.  The Lions lost.  Again.  *sigh*

This old film of Roger Bannister beating the four-minute mile for the first time in history, at Oxford University, and set to the music of Chariots of Fire, is wonderful to watch. You can see the other runners tiring as Bannister runs past them effortlessly like an antelope.

The Chariots of Fire music is going to be stuck in my head all day long.

Very interestig post about two great runners but what tickled my funnybone was the photo of the Beatles. They look so neat! I well remember my fathers comments about how untidy they were because of the long hair..... I wonder what his reaction would have been if he could see some of the singers today!

If it had to be done today the accusations of doping would be flying instead of their pure athleticism.


Uhh what would you expect from a team named The Lions. Obviously your Phinnaeus is not familiar with the Detroit Lions.

Oh I love the music - I remember going to the cinema to see it - we all ran for the bus in the same style! lol! Yes the style was correct but not the speed! lol! I love Vangelis music!

I can't even imagine being able to run like that. Wow.

What a wonderful commentary on Vancouver as well as the runners. I am taking the Skytrain tomorrow to see parts of Vancouver you have mentioned in preparation for taking some visitors from Colorado up there next month. Chinatown and Olympic Village are on my list!

Sports and music in those days had more quality, no drugs, less corruption, more of the real thing.

Nice pictures of the Beatles, the statue of the two runners, and the stadium to accompany this interesting post.

I really love that song. And the Beatles rock. Still.

I love that song too, and as DUTA said sports seemed to mean more then, I remember in 74 when a home run record was being broken the world was listening...oops gave away my age...

Fascinating bit of history, Jo, of which I was not very knowledgeable. Thank you for sharing this, it was a delight to read - and the video was great too :)

I imagine Landy chastised himself for the rest of his life for looking over his shoulder. We probably all have such "almosts" in our lives, defeats snatched from the jaws of victory.