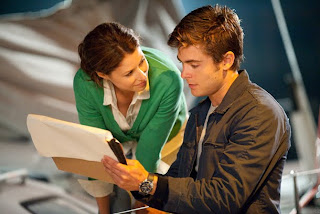 Marigold and I had a "girl's night" this weekend, and we went to see a movie called "Charlie St. Cloud", starring Zac Efron, Amanda Crew, and a young fellow named Charlie Tahan.  The movie is not meant to be anything but a sweet summer movie, based on the novel "The Death and Life of Charlie St. Cloud".  It's sort of a cross between "A Summer Place", "A Walk to Remember" and "The Sixth Sense".  It's the story of how Charlie St. Cloud (Zac Efron) feels responsible for the death of his younger brother Sam (Charlie Tahan) in a gruesome car accident, and how he puts his life on hold, giving up a scholarship at Stanford University. 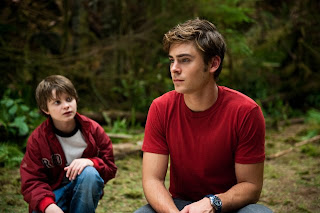 Charlie died in the accident as well, but he was revived, and from then on he is able to see people who are in the transition between this life and the next.  He spends the next five years meeting at every sunset with the spirit of his younger brother Sam, and they practice baseball pitches in a clearing in the forest.  But then -- Charlie meets Tess, whom he has admired from afar since high school.  The story at a that point takes a twist that even I didn't see coming.

The scenery in the movie is beyond spectacular.  It's really a cinematic postcard, and I recognized every scene because it was filmed here in Vancouver and the surrounding areas -- Deep Cove, Gibsons Landing, Steveston and the forests in North Vancouver.  Zac Efron stole every scene he was in.  He's a spectacularly good-looking young man, and I think that may be a hurdle he will have to overcome as a serious actor.  But he can act.  Who knew...!  His performance is authentic and nuanced, and he doesn't chew the scenery like a lot of young men his age.  James Dean was only 23 when he died, the same age as Zac Efron is now, and James Dean became a legend.  However, James Dean's over-emoting performances are almost painful to watch if you see his movies today.  I hope Zac Efron is careful not to venture over into that territory, because he really is talented, and I think he has a great future as a dramatic actor. 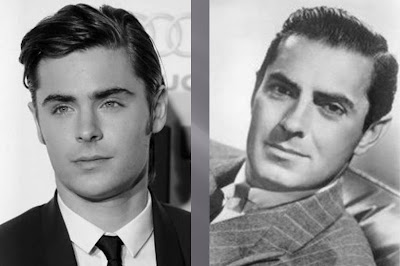 All through the movie I kept thinking, "Who does he look like ... who does he look like...?" And then it dawned on me. He looks like a young Tyrone Power, one of the famous actors from way back in the vintage years. I put the two pictures together and showed Marigold, and she laughed, "It's the same face...! That's weird...!"

If you have a teen or a tween, and you want to find a nice, cool air conditioned movie theatre where you can watch a summer movie for an hour and a half, I think you will enjoy this. Don't expect "Gone With the Wind" or "The Hurt Locker" ... but you might even be pleasantly surprised.
Posted by Jo at 1:58 PM

Sounds wonderful! He certainly is a handsome dude!

Since it's so painful to sit through the commercials and the endless previews, and to pay through the nose for the privilege, this one I'll wait to see in my own home. But thanks for the heads up, it sounds worthwhile!

Will definitely add this movie to my list. Your ability to find comparisons to past movie icons is most commendable.

I'm with you: Zac Efron is going to be one of Hollywood's shiniest stars.

I never liked Zac Effron, but maybe this movie will make me love it. Did you see Robert Pattinson in remember me? He was unexpectedly spectacular

Oh, good. I didn't like The Hurt Locker. The movie sounds great - we just saw The Sixth Sense again (Netflix) a few nights ago and I loved it all over again. Haley Joel Osment, who is now about 20, was wonderful at nine, and this is the only movie in which I really liked Bruce Willis.

Johnny Depp managed to overcome his spectacular good looks by playing character roles and proving that he is a superb actor. (I disliked the Pirates movies, but can't blame an actor for seizing the gold ring.)

I am envious that you got to spend time with your granddaughter! I am missing my Layla today. I haven't been to a movie theater in years! I barely have time to watch TV ....

I love your movie reviews, Jo. I'd probably see this when it comes to Netflix. Thanks!