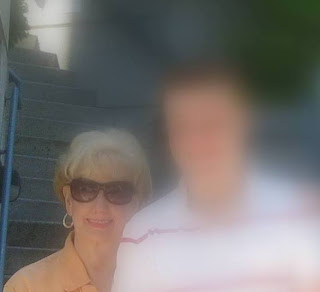 Phinnaeus is a really great kid. He seems to have inherited the best of both his parents, and he's a very nice young man. He has a finely honed sense of what is right and wrong, and he has an in-born sense of honesty and decency. With Phinnaeus, what you see is what you get. He has an open face, and a wonderful grin, and the world's best sense of humor, a sense of the ridiculous, and best of all, a sense of irony.  He can see the absurdity in almost any situation, and I have a feeling that is a trait that will carry him through his life.  Phinnaeus was born with a curiosity about everything, and he's one of those people who, when he sets out to do something, he does it well.  He inherited that from his mother.  Right now Phinnaeus is taking an interest in cooking.  I think that's a hoot.  He told me the other day he made beef bourguignon, and it turned out really well.  He said it took him six hours to make it, but everyone loved  it.  Well, of course they did. He also makes the best ice cream root beer floats -- I mean, the best.

Phinnaeus loves to hop on his bike and go for long bike rides around the Lower Mainland.  He took a keen interest in the recent Tour de France, and informed me that a local fellow from Victoria came in 7th overall.  Well, I didn't know that.  Phinnaeus is just at that bridge between childhood and adulthood, known as the teenage years.  He is tall and can sometimes be mature looking, but he is still just a goofy kid inside.  The world is still pretty much a mystery to him, and that's good.  There is time enough to learn about the world.  A 14 year-old should be a 14 year-old as long as possible, and most of them are really are just goofy kids inside maturing bodies.  They're like puppies that still haven't grown into their feet, and like puppies they need the occasional discipline and a lot of sleep.  A lot. 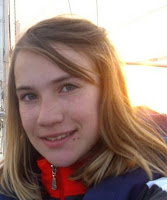 Today it was announced that 14 year-old Laura Dekker is setting off from the Netherlands, to be the youngest person to sail solo around the world.  All I could think was "Oh, good Lord Almighty, not another one."  What on earth are her parents thinking?  According to Laura, she's not afraid of pirates, she's packed plenty of school books, and she's going to miss her family and her dog, Spot.  "I can be sailing now, and that's great!"

Oh good grief, will someone please tell me what I am missing? Am I missing something? I am a little bit familiar with 14 year-old kids. I was one myself -- once. I remember what it was like to be 14.  I had absolutely no sense of responsibility beyond what a 14 year-old should be expected to have.  My friends and I were experiencing the first brief taste of independence, but we had to be home at a certain time -- usually 9:00 -- or else.

I actually feel genuine concern that this girl is being allowed to sail solo on the world's oceans at the age of 14.  No matter how much they protest to the contrary, 14 year-old kids are not mature enough for such a venture, and there are some decisions that 14 year-olds are not mature enough to make on their own.  Please, someone put a stop to this nonsense.
Posted by Jo at 10:31 PM

So what happens if she runs into trouble as well like that other girl? This should not be allowed.

The law of the sea allows it. She will be in international waters and no government can stop her unless she is in their territorial waters. Then there could be a violation of the right of passage portion of the law.

Her parents obviously paid for the boat so it's them seeking the record not this child who knows a little bit about sailing by canvas.

Her parents are pimping her to the 'johns' named Greed, Fame and Celebrity. It truly amazes me how many 'parents' -- no, people who have produced children because these are NOT "parents" -- there are in the world today.

I think it's wonderful that Phinneas is learning to cook! And that he would spend six hours creating a dish. This is quite amazing. I don't know what to think of the 14-year-old girl. It seems to me that Teri is right, that she is being pushed by her parents, and I can only hope and pray that she will be all right.

Phinneas sounds like a true delight. I love that age between child and adulthood. That sense of finding your footing in the world... and trying out lots of different things.

I completely agree with your take on Laura. If one is going to spend that length of time all alone... I would hope that they would have a strong sense of self. Even if she is a fearless expert at sailing, she is still a child. She is still learning about her emotions and finding her footing. Why are her parents so ready to push her into adulthood?

Having no fear of pirates just shows her lack of maturity and wisdom.

Hi, Jo :) You look so beautiful in your picture. It's always good to see your smiling face and be in your presence here. Phinneas is a treasure, isn't he. You're truly blessed in this life.

As for the 14-year-old...hmmmm, at that age we all believe we are invincible, but when we mature we understand just how little we actually knew or understood. Nature is severe and I do believe she is awfully young to undertake such an endeavor. I have been in very stormy seas where we needed several hands on deck in order to survive. She's taking a big risk.

We report this sort of behaviour as child abuse in other situations. Why does a news conference make it okay to put your child in danger?

Isn't this the girl that tried to do this at 13? So, at 13 she's not old enough but one year makes a world of difference, huh? Sad. Potentially tragic.

I am amazed that Phinneas is willing to spend 6 hours on a dish-I'm fairly certain I know no one else who would! If he continues on that path he'll have women falling at his feet in a few years...

I've been following Laura Dekker's story as well. Last year she was made a ward of the court because her parents, both of whom supported her voyage, were considered incapable of protecting her. I'm concerned for her, too, and agree with you completely.

Your grandson sounds like a wonderful boy. I'm glad his parents have the good sense to allow him to be 14 at home w/o setting off around the world in quest of a record.

What I say will most likely be what the others before have said - but I will say it again.

To allow a child of this age to go off in a boat around the world or an airplane or whatever is crazy, stupid, ignorant, irresponsible, and just downright negligent.

It seems that parents who permit this actually encourage it so that they -- the parents -- can get lots of attention.

And that is damn selfish on the part of these parents.

PS I would say how I really feel but I am being tactful here....

Phin sounds like a wonderful kid. Jo, I am in total agreement-in my opinion a 14 year old is in no way equipped to attempt a stunt like this, and her parents should be charged with reckless endangerment.

I think fourteen is a great age and your grandson sounds wonderful. What kind of parent would allow their child to do this. Crazy ones I think. It almost seems illegal or something. They aren't adults until they are 18...and the parents or guardians are responsible for their actions. I think I am right about that...maybe the laws have changed over night on me??

I hadn't heard about Laura Dekker. It sounds like an incredibly stupid thing to let her do. I would think sailing such a distance in so many different kinds of waters is something that would take an experienced hand. Crazy.

I've given you an award over at my blog. Don't worry about passing it on if awards aren't your thing. Just consider it a shout-out for your blog.

I can not believe how Phinneas has grown.