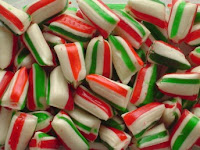 We are all familiar with those little peppermint Christmas candies called Humbugs.  They're delicious and pepperminty, but once they're placed in a candy dish and exposed to the air, they  eventually weld themselves together until they are one solid mass.  Pick up one humbug, and the whole bowl of candies comes with it.  But, what would Christmas be without them?

During the rest of the year, Humbugs are a butterscotch/peppermint candy, brown and white striped.  In Canada they are often flavoured with maple syrup.  And yes, they still retain their ability to meld together into one big lump of candy, once they bag is opened.  They're known for collecting lint in the recesses of pockets and hand bags.  But, brush off the lint, and they're as good as new. 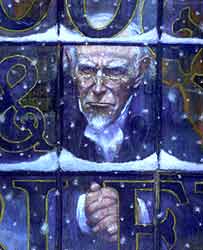 At work today we tried to find the origin of the name of this candy, without any success.  We Googled it, we Wikipedia'd it, we did everything, without any luck. So, your mission -- should you choose to accept it -- is to discover the origin of the name "Humbug" as it relates to the little striped candy.  And no, it has nothing to do with a certain Mr. Scrooge and his opinion of Christmas.  A bag of Humbugs, complete with Canadian maple syrup, will be awarded to the person who finds the history of the name of this candy.
Posted by Jo at 8:55 PM

I've never heard of them before! hmmm...well I've got some research to do...

The candy known as "humbugs" are characterised by having a soft sweet center and a hard striped shell. In many ways, this was seen to be similar to a bee which is striped and produces sweet honey.

This led to it being given the colloquial name of "hunny bug" seeing as bees are bugs that produce honey and that "hunny" had been a popular way of spelling "honey" due to the Winnie-the Pooh books. Over time, the phrase was contracted to "Hum -bug" which is how "hunny bug" would sound if Pooh bear had a mouthful of sticky honey.

Piglet: "Where did you get all that honey, Pooh?"

(and so a totally fabricated and erroneous fact enters the internet to be picked up by google and other search engines and perpetuated as fact! Now that's the real meaning of humbug (i.e. fraud, lie, hoax). Mwahahaha!)

We don't have them in the US. I Googled many sites but all agree that the name has nothing to do with Scrooge, as you said. They all agree, too, that the origin of the name of this sweet is unknown.

I have never heard of them before either, but I do know that a dish full of sweet hard candy that somehow remains un-eaten for long becomes one sticky mass.A big, sweet, sticky, edible mass.

Guess I fail the mission, but enjoyed reading about it.

I've seen them before, but we don't call them humbugs. I think I'd like the non-Christmas version better than the pepperminty one (my favorite peppermints are those sort of airy ones that crumble in your mouth when you bite down on them). I think you should go with Squirrel's explanation - it makes the most sense :)

I faintly remember reading about the origin quite a few years ago. If memory serves me correctly the candy originated in a little sweet shop in Montreal. Just researches it in the Montreal Gazette archives and here is the info from that source:
Humbugs are a traditional British hard candy. A Montreal variation of them started appearing shortly after 1914, when the Stilwell family emigrated from Britain to Montreal and started making the candy.

Although the family matriarch died a decade ago and Stilwell stores in Verdun and LaSalle have closed, the family still produces limited quantities for sale at the following locations: Le Panier gift shop in Pointe Claire, Deli Plus Frank & Fred in Pointe Claire, Westmount Stationary in Westmount, the St. Mary's Hospital Centre gift shop and the Montreal General Hospital gift shop.

Not being much of a candy eater, I hadn't paid attention to those little candies before and have never heard them called humbugs. I am much more interested in chocolate! :-)

We do have them in the U.S. And yes, they do all stick together. I didn't know they were called humbugs.

I do remember these although I did not know they were called humbugs. I'm more of a soft candy person myself.

I thought they were humbugs because when you put them in your mouth you hummmmmmmmmmm-> mmmmmmmmmmmm!

Thank you, everyone. (Loved Squirrel's definition of hunny bugs ... *heh*) However, it appears we are still stymied as to the origin of the name Humbug. I will keep looking. :-)

"We are all familiar with those little peppermint Christmas candies called Humbugs."

I do remember "Humbugs" but never knew that was the common name for the confection.

I spent some time attempting to find the origin of the name but no luck. :(

"Humbug is an old term meaning hoax or jest. While the term was first described in 1751 as student slang, its etymology is unknown. Its present meaning as an exclamation is closer to 'nonsense' or 'gibberish', while as a noun, a humbug refers to a fraud or impostor, implying an element of unjustified publicity and spectacle. The term is also used for certain types of candy."
Wikipedia

The absolute correct answer is lost in the annals of time. How the term humbug got attached to the candy in question can only be speculation.

Some may say it was trick by Santa Clause played on the not so nice but not so naughty children and others may say that it sticking together like that while looking as if it would have a single piece come away in the hand was the hoax or jest.

The only thing I can say for certain is that the term Humbug seems to be of Germanic origin and predates Dickens by about 50-100 years.

OK, Jo - here's what I've dredged up from the deep and mysterious crevices of my brain...
During WWII the bombs dropped during on england during the blitz made a humming sound before they exploded. they were known as humbugs. These candies were then called humbugs, as they resembled little bombs.
I don't think I've made this up, but I can't remember where I read it. I'm now going to look up bombs, blitz, etc and see if I can find a reference to humbugs in WWII documentation. I'll let you know!
Kathryn : )

I have seen that every person wants to express their feelings but they are not able to express their feelings properly in words but the content you have written in your post is very beautiful, it seems that you have expressed your feelings Has expressed. Hi, you are a person who writes a very beautiful post, in the same way, you keep writing new posts in your life, our best wishes are with you.
fear
escort service in sector 31 gurugram
escort service in sector 32 gurugram
gurugram phase 3 escorts
Phase 5 Call Girls
Escorts services in phase 1
escort service in noida
escorts girl in maneser
Call Girls in Gurugram
Call Girls In Mahipalpur