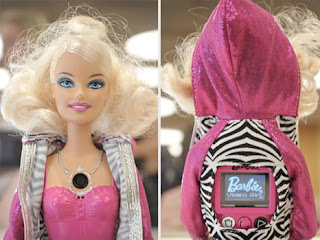 Finally, now, just what every little girl wants -- a Barbie doll that comes complete with its own FBI warning. This Barbie doll is a real working video camera, that can take 30 minutes of video and audio, and post it to the Internet. What happens on the Internet stays on the Internet... Agents from the Federal Bureau of Investigations warn that "Video Girl Barbie" could be used to make child pornography. FBI has had cases of child abuse involving Barbie dolls as well as cases involving hidden cameras, which makes them worried about the combination in this particular toy.  And yet, this doll is the hottest selling items this season.  I wonder who is buying them?

Mattell said in a statement that its "products are designed with children and their best interests in mind. Many of Mattel's employees are parents themselves and we understand the importance of child safety -- it is our number one priority." 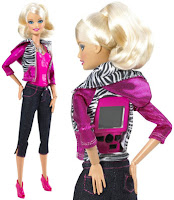 Perhaps I am beginning to sound like a bit of a prude, but I would not be comfortable with giving this "toy" to a child. Any child who is still young enough to be playing with Barbie dolls is not old enough to be videotaped and posted to the Internet. I should think, in the 21st Century, that most parents would be savvy about the dangers of this sort of thing, but maybe I'm wrong.  If the importance of child safety is Mattel's number one priority, they need to rethink "Video Girl Barbie". According to the merchandising, "Even though this Barbie is for ages 6+, parents will have to help their little ones at first to get started. Once the video is edited, you can save it to your computer and then upload to share with friends via YouTube or any social networking site. There will be other opportunities to share your videos with the Barbie community as well in the future."  Does anyone else find this just ever so slightly creepy? The doll even looks creepy. I think the whole idea of videotaping little girls playing with their Barbies and then uploading the videos to the Internet, is unsettling. And creepy...
Posted by Jo at 11:32 AM

What happened to the good old days of just playing with a toy? Why does everything have to be electronic and/or internet adaptable. Don't kids spend enough time in front of tv's, video games, computers?

There are so many things wrong with this toy. It's just unbelievable that Mattel would allow this doll to be made in this way.

I just can't understand the reasoning behind this.

It must take a special kind of mind to come up with some of the "toys" kids have now days.

If I had had this Barbie I would have used it to video tape my brother & "tell" on him to mom.

CREEPO for sure my friend.

It's about that DARN DOLLAR. Help me Lord...I would NEVAH buy this thing or anything similar!

If the FBI has a warning out, why wouldn't the makers of the doll pull it off the shelf. I just read that it has been on the market since July. That must mean something has happened for it to be in the news now. I had not heard the story, but now that it is out, I suspect most parents will not buy the doll. It is a scary world for sure. But Dana's comment made me laugh...because that is what most of us would think to do with it.

Lordy, the world is changing faster than I can keep UP. The only problem I had with your post is that I think most parents actually take lessons from their kids about how to use the internet these days... :-)

This poor old world just keeps getting sicker and sicker... I'm sure Mattel is far more concerned about profits than children.

Just saw the movie Battle in Seattle for the first time yesterday... this fits right in. VERY creepy.

I couldn't agree more. I think Barbies are creepy altogether; this is just utterly bizarre icing on a very creepy cake.

This takes creepy to a whole new level. Appalling!

I know its a sick world out there, but we have to educate our kids and teach them to recognise problems. We can't just go around taking everything away from them that may potentially be a problem. Then we can just as well tell them not to eat cause they may choke, not to cross the road cause a car may hit them, not to swim cause they may drown... etc, etc, etc. Lets rather put our kids in boxes and pack them away somewhere. If a pedophile whats to do the disgusting stuff they do, then taking a barbie doll with a video camera off the market won't make a difference.

Awful, awful, awful. What is the world coming to? Thanks for the warning.

I think it is all a sad reflection of our world today. There's nothing wrong with a doll (or is there? when the doll portrays a feminine ideal which is inaccurate), nor anything wrong in putting a video camcorder in the creative hands of a child, nor is there anything wrong with using the internet. Unfortunately the world is full of sickos that will use these tools wrongly. Thanks for alerting us about this. Mattel should be more careful.

Scary, creepy, and many other things. This leaves a distaste in my mouth.

I don't know what is happening to us, but I think we need a good kick in the pants!!! What a shame, Char

This is disgusting and I'm shocked that you only have 14 replies regarding this post. Don't people understand that we are in charge of protecting our children! The FBI warning/alert is a start, but I suggest we all boycott this product and spread the word ASAP. Call me paranoid or somebody who watches Nancy Grace too often, but it's only time until some freak/pervert gets a hold of this doll. O I'm so sad and disgusted AND who in "Barbie" world dresses barbie like that and puts her hand on her butt - what type of message is that sending! Thanks for posting and I hope this product gets discontinued ASAP!!!

I thought this camera was to catch pedophiles.

Everyone spills their details on Facebook anyway and they're not even children, but adults who should know better.

I still can't figure out just what parents this appeals to, for they are the ones buying this toy...and any parent who actually helps a little girl figure out how to connect with the internet must know they are not acting in the best interest of their child...mustn't they ?

I hate to ask but where do you plug in the USB?

I'm with Alicia on this.

And yes, it's very, very creepy!

Creepy, creepy and most of all... creepy!

Count me in as a prude. They should ban this doll. I think Mattel do quite nicely already with their plain ordinary no-tech barbies. Yes I can see this being used for purposes other than intended for sure. And I wonder who the hell approved its design and manufacture.