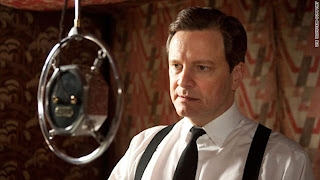 This is a movie I haven't had the opportunity to see yet, but soon ... hopefully (Leslie?) Today it was nominated for 12 Academy Awards. That's not too shabby.

King George VI was never meant to be King. His older brother, David, (King Edward VIII) abdicated the throne in order to marry a *gasp* divorced American woman. "Bertie", as George VI was known, became King by default. He hated the idea, and in fact he was terrified of it. 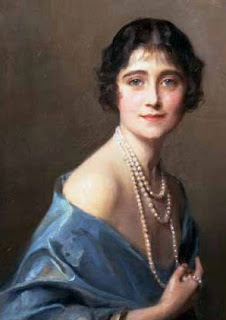 I recently read the biography of the late Queen Elizabeth the Queen Mother. She was quite the gal. In her younger days she was very pretty, and regularly jaunted over to Paris to visit the nightclubs. She loved to party, and she loved her gin and tonics. The gin and tonics probably helped her to live to the ripe old age of 103.  But she was no shy, English rose.  She was tough and high-spirited; she was the strength behind the throne, and she helped Bertie overcome his stammer by arranging for him to be seen by a speech therapist. (My daughter, who is a speech therapist, has seen the movie and she says it's wonderful.)    Interestingly, sceenwriter David Seidler had suffered from a stammer when he was a child, and King George VI inspired him.  When Seidler wrote his screenplay, the Queen Mother asked him to delay publishing it until after her death.

And yes, ladies, I have seen Colin Firth in person, and ... yes, he is even better looking than on the screen.
Posted by Jo at 12:09 PM

Yes Josie! I told someone else that I'd promised to see it with you and I can hardly wait!

I want to come too! Although that would be greedy, since I've just watched it :) and just wrote about it too.
Ooh more details about your meeting with the delicious CF please - or have you already blogged about it? x

I am hoping to see this film very soon - but I have been saying that since it was released.

You have seen Colin Firth in person, huh? Let's see. I saw Mr. McFeeley (Speedy Delivery!) in person several years ago at the Iowa State Fair. He looked about the same as he did on Mr. Rogers Neighborhood.

That's about it for me and celebs.

Wish I could join you :)


Thank you for your friendship here in the blog-world, Jo
Please stop by today to share a special moment with me if you have the time. Warmly, c-
Comfort Spiral

Every time I see the advertisement for this movie...I say..I want to see that! I used to work with an attorney who stuttered...everyone said when he was in court and spoke..he did not stutter. That amazes me.

I hope you get to see it soon. It is a wonderful movie that's even better the second time around. I could see it again - maybe I'll pop up to Canada this weekend!

I'be seen it twice now, and it WAS even better the second time round! I loved it so much and hope it wins best picture, too.

I can't wait to see this movie! I love all the actors and I'm obsessed with English royalty. I just finished "The Virgin Queen" which was a Masterpiece Theatre production. I was recently obsessed with Henry VII, and all things Tudor, so this movie is high on my list.

It seems that if you play in a movie like this its like an automatic Oscar nomination for you.

Hi - well I finally have the comments section working now (10 days and I couldn't do anything but read your blog posts).

All I was going to say is because I dislike sitting in movie houses; prefer to be at home and 'stretched out' on the lounge chair where I can get my own 'refreshments' without standing in line, I just wait for the DVD's to come out.

So, I'm always 'behind the times' with the new movies, but then I get to catch up once they put them out for purchase or rental.

So, I'm looking forward to your review and opinion of how you like the movie. Diane

I haven't seen the movie yet, but intend to. We'll compare notes after that.

Not on circuit in Cape Town yet - I can't wait! The girls and I saw "Made in Dagenham" today. I grew up near this small Essex town, famous for its Ford factory in the '60s. This film is based on a strike by the lady machinists - for equal pay. Brilliant stuff! Bouffant hairstyles, ladies working in their underwear and corsets (no aircon) in the very early days of women's lib. Nostalgia de luxe! Lots of fine British wit!

It's on my list of films to see. I've always been fascinated with the royal family.

Ah yes Hollywood is too fascinated by the Royals - as you pointed out. I think you are quite fond of them too eh Jo :)

I couldn't care less about British royalty but Helena Bonham Carter is just great in anything.

I loved your tale about the Queen Mum. My husband said she looks like a gin and tonic gal.

Yes, Yes, Yes. See it as soon as your feet will take you.

I don't go to the movies very often, but I saw this one with friends recently, and took my husband to see it again the very next night!

Marvelous! And...you've seen HIM in person? Be still, my beating heart!!♥

It's in my Netflix queue. I get annoyed at the prices at movie houses, so we wait. It sounds wonderful, though. I had a classmate in elementary school who had a terrible stammer - it was so hard for him to get the words out. I wonder what happened to him.