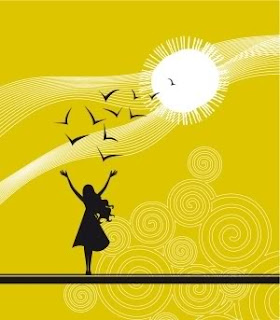 If you could take a magic pill that would make you feel wonderful, help with insomnia, depression, seasonal affective disorder, aches and pains, prevent many forms of heart disease, stroke, autoimmune diseases, and build strong bones, and it's really inexpensive, would you take it? Well, there is such a thing, and it's called Vitamin D. I have always been a strong advocate of Vitamin D, and lately it has been getting some very good publicity.  You can read a complete article here:  Preventing Vitamin D Deficiency

Of interest, lack of Vitamin D has been linked to multiple sclerosis and also rickets. One of my friends had both of these conditions in several of her family members, and it was found they were lacking in Vitamin D. According to the Mayo Clinic website, over the last few hundred years human lifestyles have changed. The industrial revolution resulted in more indoor work and less exposure to sunlight. Many societies around the world wore more clothing over the centuries, further reducing skin exposure to sunlight. These changes have brought with them a significant reduction in the natural production of Vitamin D and subsequent diseases. Nevertheless, Vitamin D deficiency is more common than you might expect. People who don’t get enough sun, especially people living in Canada and the northern half of the US, are especially at risk. Vitamin D deficiency also occurs even in sunny climates, possibly because people are staying indoors more, covering up when outside, or using sunscreens consistently these days to reduce skin cancer risk.

For me, whenever I take Vitamin D, I have the same feeling as if I had been outdoors on a sunny day. You know that feeling? Ahhhhh... a little ray of sunshine. Here in Vancouver, our sunshine usually comes in liquid form ... *sigh* This means the sun is only strong enough between May and September to give us sufficient Vitamin D.  When I take Vitamin D, I immediately have a feeling of well-being.  It's the next best thing to a stroll on the beach in Waikiki or the South Pacific.

I am vitamin D deficient and winter used to be very difficult for me, especially when we lived in a cold, snowy climate. Vitamin D is like a miracle pill for me!

I take a calcium pill with extra D in it, but maybe I should take vitamin D alone based on your recommendation. I haven't noticed feeling better from taking the combo.

We have a gray day here today, with a possibility of snow flurries. But the next time we have any sun I'm going outside - even if it IS 25 degrees.

yeah vitamin D is good for bones and its all free :d wonderful post

i take vitamin D at night, because someone
told me it helps insomnia, but now i'm
switching to the morning for that sunshine
feeling!

your e.e. cummings quote at my place had
cheered me considerable already!

When I was found to have some degree of osteoporosis several years ago, my doctor put me on very large weekly doses of Vitamin D for a long time. Now I take it once a month, and my bones haven't gotten any worse. Everything is a trade-off - we wear sunscreen to ward off melanoma and other aspects of our health suffer.

I take Calcium with D every day. Maybe I need more. It is a blah day and everything looks gray since the Christmas lights are gone. I do have lots of stamina in the sunshine months. I am outside alot and other than my face usually forget to put sunscreen on. Can't hurt, might help. Vitamin D pills here I come!

Winter fog season has just started here in Kern County and there are times we don't see the sun for days on end, just grey, misty fog. My mom gets SAD terribly. I'm going to stop and pickup some Vitamin D for her this evening. I had heard it was a good vitamin to take but had never heard anyone endorse it that I could trust...well now I have! Thanks Jo!

I love the way you burst out into song at the end there...lol. I'm going to have that tune in my head the rest of the day!

Thanks for this tip.

I think I need a strong dose right now! lol

Blondes have the same effect on ma and are so much more fun!

Well....I thought so.....and then recently I read an article that said all the vitamin D excitement was nothing but hype. The latest fad.
I took some for a while last winter and I don't think I remember a difference. I do, however, have a huge supply. It couldn't hurt...

Three years ago, we discovered I had almost NO vitamin D. My hair was getting thin and I felt peculiar. I kept saying it was as if the foot of God had simply flattened me. NO energy, yet it wasn't depression and I knew that. Within three months, I felt as if a miracle had occurred. I think those of us who are necessarily housebound truly need to be vigilant about this vitamin. A severe deficiency can take a while to overcome--months, in fact, but then? Yup. SUNSHINE in a bottle.

I started taking 2,000 IUs of Vitamin D every day, living just a few short miles away from you, after reading this article by Dr. Andrew Weil.

I think I am feeling much more balance and optimistic since I started about a year ago.

Come by my place for a dose :)

I'm going to take a pill in this noon..I mean, considering an outing...Natural the vitamin D...

So true, Jo. Vitamins are the secret to feeling good and remaining young, and if you can get them from natural sources like fruits, veggies or sunshine, so much the better. Love the illustration on this post! ~Deedee

My massage therapist says we need sunshine in order to release the Vitamin D in the capsules we take. That the Vitamin D breaks down into Vitamin D3 which is what is actually used.

I don't know if that's true, but I now take Vitamin D3 in addition to the calcium fortified with Vitamin D.

Winter is still my least favorite time, though, I have to admit. Especially in the Pacific Northwest, where I live.

One of the things that I love about living in the South is being able to go outdoors, almost year round. Today it was 65 degrees and sunny and I spent the whole afternoon outside. I'm a big believer in Vitamins D and also take a supplement. Happy New Year, Jo!