Music Of The Movies... 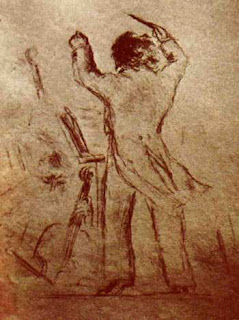 Occasionally there is a piece of music so perfectly suited to a movie, it becomes one of the main characters. Two years ago I saw a movie called "Knowing" with Nicholas Cage and Rose Byrne. It was a science fiction movie, and the music that accompanied it gave the movie an added depth and mystery that completed the movie. I have watched the movie several times, just for the mood and atmosphere of the music. I had heard the music before, but I didn't recognize it when I heard it in "Knowing". It was so perfect, I thought it had been composed just for the movie. 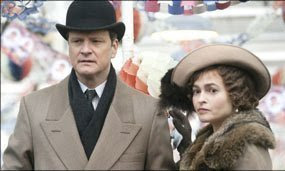 And then on the weekend, I saw the wonderful movie "The King's Speech". It is a beautiful movie and deserves every one of the 12 Oscar nominations it has received. The movie has taken filmmaking to the art form that it was meant to be. My favourite scene was where speech therapist Lionel Logue was encouraging King George VI to let out his feelings, and the King let lose with a barrage of expletives that made me laugh. Haven't we all wanted to do that on occasion?

In the pivotal scene of the movie, when the King was giving his famous wartime speech, I recognized a familiar piece of music. I turned to my friend Leslie and said, "Hey! That's the music from 'Knowing'". And somehow it was perfect for the scene in "The King's Speech" as well. Instead of sounding moody and atmospheric, it sounded majestic. It was the sound of an apprehensive, hesitant man becoming a great King.  It was an important part of the movie.

On the way home yesterday, the song kept playing through my head, and I remembered where I had heard it before. It had been one of my father's favourites, Beethoven's 7th Symphony. It was composed in 1812, and first played -- conducted by Beethoven -- in 1813. And today, in the 21st Century, it still sounds as fresh, modern and as beautiful as when it was first composed.

When I saw "The King's Speech" with a friend and heard this music come up, I turned to her and whispered, "Is this Beethoven's 7th? I just love that music!"

She looked a me and asked, "What is wrong with you? No one thinks about the background music."

Ha! I'm so glad someone else notices these things, too.

I've not seen "Knowing" before, but you can be it's on my list of movies to see. Thanks for the tip!

Music is always a main character to me, not only in movies, but even in advertisement clips. There are many instances where music just "steals the show".

Oh I must get to the cinema and see this - but the cinema is a good distance away and takes up a whole day. Still, it does sound as though it would be worth it!

But music does enhance a simple staid sequence and enrich and adds depth to an already good one.

I went to see this yesterday and LOVED it. I had the book and wanted to finish reading it before I went. The book is also a great accompaniment and the movie version did not disappoint (as sometimes - often - happens)

The other Jo's friend is so wrong. She is missing so much depth. There have been essays done on the significance of the choices of music that (Inspector) Morse listened to. I have the soundtrack of Out of Africa and I can recall scenes just from listening to the sweeping sounds of the music.

This is my favorite Beethoven symphony. I will have to wait for the DVD, but will grab it up when it's released. Now that you have told us about the score as well, I don't see how I could resist. I love Collin Firth and to see him in a role like this would be wonderful--not a light comedy, but something with some sweetness that I believe, as an actor, is peculiarly his own. I can't wait. NOw I must go back and finish listening to the clip you included!

Jo, we have this in common. I often love a soundtrack so much I'll watch a movie repeatedly just to hear it, even if I've purchased it already.

I've never been good about recognizing classical pieces, it is just a skill I lack. Very well known, yes, those I can name but I am likely to recognize a piece and not know its name at all. In my next life I will be musically knowledgeable! And hopefully a better dancer ;-)

Also, I got to turn on the music and catch up on your blog. Thank you so much for the book recommendation. I'm off to Amazon to see if there is a kindle version, as I'm a recent semi-convert (I still like hardcopy on beloved books).

Thanks for the review on the King's Speech, too. I often find I agree with your assessment of movies, and since I've never seen Knowing, looks like stopping by here has been fruitful for me. To Netflix, away!

I just listened to the piece again on your blog. I just loved the movie, as you know, and saw it twice. It is neck and neck with "The Social Network" for the best picture oscar, and I think it will deserve everything it gets! They are two such different movies, I don't know how I would pick.

That is one of the reasons I simply love classical music. It remains fresh through the centuries and like any great work of art, it causes its listeners to experience some of the same emotion that inspired the composer to create it. I think this is true of great art of every kind.

There's "found" music, like in the King's Speech and then there's original music.

The Italians seem to have the market cornered on original music. Nino Rota was my favorite - all the Fellini movies and the Godfather theme.

Morricone is almost as great - all the spaghetti Westerns - Once Upon A Time In The West (glorious)and The Mission.

And then there was Mancini - Pink Panther and Breakfast At Tiffany's.

John Barry just passed, also one of the greats - James Bond (but not the theme), Out Of Africa, Dances With Wolves.

Soundtrack music is a category all of its own.