The Princess, The Pea, And The Featherbed... 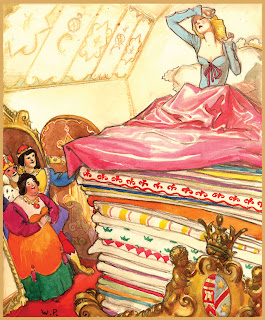 When I was a little girl, my father used to read me the story of "The Princess and the Pea" by Hans Christian Anderson. It is the story of a young woman who claims to be a princess. One stormy night she takes shelter in a prince's castle. The prince's mother decides to test if the young woman is really a princess, so she puts a pea in her bed and covers it with 20 mattresses and 20 featherbeds. In the morning the princess tells her hosts that she had a dreadful night's sleep, because of something underneath the mattress. Of course, only a real princess would have the sensitivity to feel a pea through such a quantity of bedding. The prince and princess are married, and the pea is placed in the Royal Museum.

I loved the story, and I always used to laugh because I could identify with the princess. Ever since I was a child, I have gone through phases of having difficulty sleeping. I remember once asking my father to go outside and silence a cricket that was keeping me awake, chirping underneath my bedroom window. I was four years old. As a teenager, my mother often made hot milk for me at night, because I tossed and turned until the wee hours. 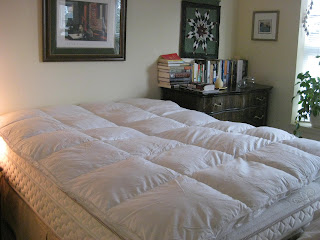 Yesterday I treated myself to the ultimate in luxury -- a feather mattress topper. I put it on my bed, put on clean sheets and climbed in. Oh . my . goodness. It was like lying on a cloud. I have never felt anything so comfortable.  As I was lying there, I thought of the story of the princess and the pea.  Even the princess would have difficulty finding anything wrong with this mattress.

Gosh, do you think that means perhaps I'm a princess?
Posted by Jo at 2:26 PM

That bed . . . looks like Heaven.
Please give us a report in three months and let us know if it's still as fluffy as it is now.
I might follow in your sleepy footsteps.

Gasp! that sounds absolutely wonderful. I want one, and maybe now I'll go out and find one, thanks to you. And yes, you are definitely a princess... :-)

Of course you're a princess! Happy Valentine's Day, Jo!

That bed looks super comfy now! Princess or not I hope you get a good nights sleep!

I have one I sleep on and one I sleep under. Sheer luxury or at least it feels that way. You do have to fluff them up now and then

Did it make it even better than my guest room mattress?

I'm sure of it. I loved that story, too, but was conflicted about the princess telling the Queen she had slept badly because I knew that was a rude way for a guest to behave.

Your feather bed looks heavenly! I want one, too.

My daughter loves this story, but she refuses for me to put a pea under her mattress. She is my princess.

Of course you are a princess Jo :) a beautifull one at that. That bed looks out of this world, in fact the whole room looks beautiful wow. Enjoy your sleep.

I can be like you - noises really disturb me when I'm trying to fall asleep. And I remember staying up all hours reading as a teenager because I couldn't sleep. But once I fall asleep I'm gone - no waking me up very easily then!

That bed looks absolutely fabulous. I would also like a report in a couple of months to see if you still love it - Dr. M & I might need something new for our mattress :)

What's funny? My three year old grandson is just like me!

No, Jo, it simply means you are one very wise woman.

There is nothing better than a featherbed. It's like being rocked in your mother's loving arms, isn't it?

It's the cricket and the hot milk story that makes me think you're a princess! :-)

What a beautiful gift to yourself!

I tend to hear every little noise so I've taken to sleeping with earplugs. It's made all the difference in the world.

Jealous, jealous jealous!
-although it is the Olympus Sleeper I have had my eye on. Do you suppose that makes me a godess?

Oh to find the perfect bed. I sleep on one side until it wakes me hurting then roll over and repeat the process. Can't sleep on my back as my spine pops apart and I am a turtle, someone has to roll me over on my side. Then I am in excruciating pain until my spine goes back together.

Of course you are a Princess. We just did the very same thing, only we got a new bed. It is as high as the princess and the pea story...my husband laughed and said we needed a ladder.

I have always related to that story, which I also loved as a child. A matrress button or even the pattern stitch would set me off to tossing and turning..

That's quite a good story! But I must say that this kind of story can turn to reality. It's not comfortable to sleep on a not-so comfortable bed. And good for you to lay your back against the softness of your feather mattress. A mattress like this can treat you like a royalty.