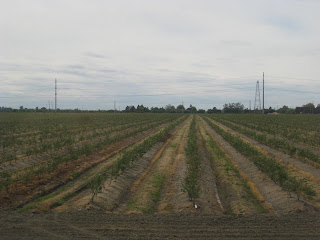 You see this field here? This is what is known as h*ll's half acre, and yesterday I spent two days hours there.  The day started out pleasantly enough.  My friend Leslie and I met at the RiverRock Train Station and drove out to Ladner for the Ladner Village Market.  We had lunch at a lovely little pub by the marina.  It was a gorgeous day, not too hot, filtered sunlight...  We stopped after lunch and had an ice cream cone and strolled through the market.  I bought a couple of books for Marigold about a little girl her age who lived in Marigold's home town in the 1800s.  I thought she might enjoy it. 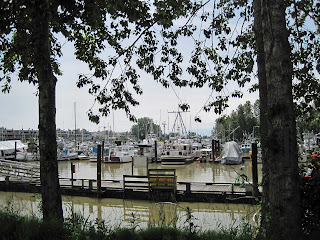 The market was hot and crowded, so Leslie and I took a drive over to the other side of the marina, and sat in the cool shade and chatted for a while.  There is something so very peaceful about a marina, and the sound of the water lapping against the hulls.  When it was time for me to come home, Leslie drove me over to the Ladner bus exchange so I could catch the bus back to the RiverRock train station, and make my way back to Vancouver.  At the Ladner exchange, Leslie checked which bus I should catch, and at which Bay.  No. 601 at bay 5. Okay. I got on the No. 601, and after about twenty minutes of watching farm land rolling by, I began to realize we were not heading towards Vancouver. Apparently there are two No. 601 buses and I had caught the wrong one. The passengers and the bus driver were very helpful. They suggested I get off the bus, cross over to the other side of the road, and catch the No. 601 going in the opposite direction. That bus, they said, would take me to my train destination. Okay, thanks. I got off the bus in a remote, unfamiliar part of the country, crossed the road and waited ... and waited ... and waited ... for almost 45 minutes, my eyes peeled on the horizon looking for a bus, any bus. I was hot, I was thirsty and I was lost ~~ I had no idea where I was. Finally a familiar-looking bus with the No. 601 pulled up at my stop. It was the same bus from which I had disembarked across the road 45 minutes earlier, with the same bus driver.

"Are you freakin' kidding me?" 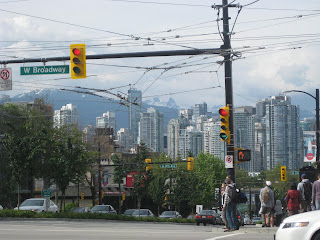 I still wasn't convinced this bus would actually get me back to civilization. For just an instant, I had a small frisson of fear that I had stepped into an episode of The Twilight Zone, and I was doomed forever to ride the No. 601 throughout the never-ending bucolic countryside. I wasn't sure I was even in British Columbia anymore. It could have been anywhere.  But all's well that ends well. I'm home, back in the city, and I have lots of photos of horses and cows and barns...

It's curious to me that the bus driver didn't just tell you he would be heading back there himself! Glad you made it home and didn't actually step into a Twilight Zone episode... :-)

On my goodness. First off it gave me a good laugh but quickly remembered the times when I felt like I'd stepped into the Twilight Zone and knew exactly how you felt.
Good to know you are now safe and sound.

I have gotten lost a lot of time except that I get lost driving. I once went to Langley, got on the wrong road back to Burnaby and ended up about a mile away from the US boarder - I mamanged to get turned around, but what should have taken me 45 minutes to get home took about 3hrs.

That was creepy and you told the tale very well. Reminds me of Brigadoon.

OMG! Half my bad! I figured out right away that's what happened, but when you're not familiar with the area, well....Stupid bus driver, though, he could have told you to just stay on the bus 'cuz he'd be going into town eventually. You had quite the adventure!

Oh my, it does sound like the Twilight Zone. I'm so glad you had a good day otherwise, and that you finally made it home safely.

Hearing the theme music from the Zone now. NENENENENENENE.
Glad it turned out alright. Sounds like a lovely day up till the bus ride home. Glad to see you and Lesley are still having days out together!

I had visions of you running through the corn fields as a small plane circled overhead...ala North by Northwest!

That sounds a little scary! Glad you made it home!

Wow! What a trip - it was starting to sound like "Twilight Zone." Glad you mad it back safe and sound.