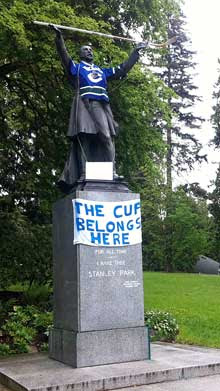 At the entrance to Vancouver's famous Stanley Park is a statue of Lord Stanley after whom the park is named. Frederick Arthur Stanley, was the 16th Earl of Derby and he served as the sixth Governor General of Canada from 1888 to 1893. His visit to western Canada in 1889 gave him a lasting appreciation of the region's great natural beauty as well as permitting him to meet the people of Canada's First Nations and many western ranchers and farmers. During his visit he dedicated Stanley Park, which is named after him. He also experienced the joys of fishing and avidly pursued the sport whenever his busy schedule allowed. As Governor General, Lord Stanley was the third holder of that office to whom Queen Victoria granted the power of granting pardons to offenders or remitting sentences and fines and the power of mitigating capital or any other sentence. ~~ Lord Stanley, biography 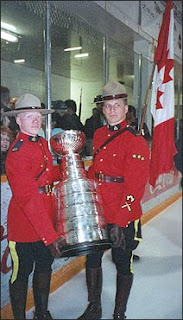 In 1892, Lord Stanley gave Canada a treasured national icon — the Stanley Cup. He originally donated the trophy as an award for Canada's top-ranking amateur hockey club. Then in 1926, the National Hockey League adopted the Stanley Cup as the championship prize in professional hockey. That this now famous cup bears Stanley's name is a fitting tribute to his encouragement and love of outdoor life and sport in Canada.

For the past 17 years the Stanley Cup has been in *gasp* America, where it was stolen from us won by the New York Rangers. In recent years it has been in Tampa, Anaheim, Pittsburgh and Detroit.

As Rocket Richard would have said, "Sacré bleu...!"

I'm not a huge hockey fan, baseball is my game. But I agree with Lord Stanley; it's time to bring the cup home. Let the games begin...
Posted by Jo at 8:08 AM

OK, now that 3 of your Dear Readers have said our approval... Watch out of discenting views.

You know... From those "One Planet, One World, No National Boundaries" people.

Should have said "watch out for"...

O goodness. I'm not a hockey fan - there isn't much ice down in South Texas, but I can imagine having a national treasure held hostage by another country.

- The NHL trophey in Tampa of all places... hard to wrap my head around that one.

I just love the way Lord Stanley proclaims the home of his cup. Hope everybody listens.

I hope you will get it back, the Cup needs to be in Canada!

Hockey's not my game, but I do have a friend in Detroit who is a fanatic.

May the best team win!

Yes, tonight is the start of bringing in home. Then to Calgary, Edmonton, Montreal, Ottawa and Toronto with a mixture of Vancouver in there as well to keep it in Canada!! Go Canucks Go!!

Competition is a good thing, you know!

Two excellent teams will be playing for the cup. I'm a Detroit Red Wings fan; my husband is from Boston, so I have to join him in the hope his home-town wins the cup.

However, since this event takes place every year, the cup never stays in one place for all that long and everyone who loves Hockey as I do, has full appreciation for how the cup got its name and the history behind it, so we still hold reverence for its origin and are happy that we can join with Canada to share the joys of each season when we begin anew and see the wonderful Canadian teams continue to remind us of how it all began.

Yes, I agree it is time for the cup to come back to Canada. We Americans are very generous and don't mind sharing.

Congratulations on Game 1!
(and yes, I know, it is not Canada's Cup if you win)

I think the Canucks have the best looking uniforms in hockey -- no wonder they are so good ... the other teams are intimidated!

Congrats from Bruin land. There has been a renewed interest in hockey here in New England during the past few weeks, but I am not a sports fan at all. Hope the best team wins.