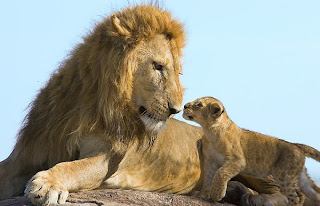 By now, probably everyone in the known universe has seen the following video.  I think it has been viewed several million times, but perhaps this will make it several million and one. There has been some debate recently over whether animals are sentient beings. I have always felt they are. How often have we witnessed an animal doing something, and we have said, "That's almost human..." I remember when I was a little girl, my brother told me that humans are animals, and I didn't understand it. How could we be animals? We're human. But I realize now that humans and animals share much more than we realize. And sometimes, judging by some human behaviour, we are fortunate to share some animal characteristics. And yes, I believe animals are sentient beings ~~ very much so.

I hadn't seen that..Oh my, my heart is so full right now! I grew up beiing taught that animals have no feelings or souls, I guess this was the excuse for eating some of them. I've always been so tender hearted that I could not imagine that they didn't have feelings, souls, spirits...just look into their eyes I say. Great post.

There is not a doubt in my mind that animals feel things, think and plan. I have seen Angus outsmart Max too many times not to believe that.
That video, which I just saw for the first time yesterday, is about the most heartwarming thing I have seen in a long time. I'll join you in that "AWWWWWWWWWWWWWW!"

I love this Video and whenever I find a link to it, these past days, I watch it.

I had seen that video in other blogs, but yours is the first time I actually stopped to watch it. Of COURSE animals are sentient beings! That's one reason I don't eat them (although I do eat fish).

Hadn't seen it, what a great post. Of course, I agree, animals are sentient beings. I once had a little female dog who had never had puppies. Our mama cat died leaving five newborn kittens behind. Yes, you guessed it, my dog adopted them. She even provided the needed milk for them to suckle and live. I wonder how many of the human race would be able to set aside their differences and provide unconditional love?

Awwww...made my whole family watch! So sweet. I believe we are much closer to animals than we think.

I get very skeptical when people try to project human emotions onto animals, whether it's their dogs, their cats, or the monkeys at the zoo. But ... it's hard to argue with the videotape. Very cute!

I love that video, and yes, I believe animals are sentient beings.

In developing countries you often get stray animals in the streets. Mostly dogs and cats. Just try going near their newborn kids and see how their moms react violently....infact cats and dogs "become" more violent and fearless when they sense any danger to their kids...its a very common knowledge in our part of the world...

I absolutely believe that non-human animals are sentient beings, beyond the slightest doubt. And I also think that in many cases, they are far more noble than we are despite our much-celebrated opposing thumbs.

Such a sweet and beautiful moment captured on video.

I didn't go "awww" - I didn't! I did this little mewling noise in my throat instead :) Too cute.

I really can't believe this is even a debate - of course animals are sentient - and some of them are smarter than some of us!

I think they definitely are. So much is attributed to instinct, but anyone who has lived with and loved a pet knows better. They think and they love, no doubt in my mind.

Of course animals are sentient beings! I have always been an animal lover, especially a cat lover and although I fully realise that they are not of the human species I know that they have all the human characteristics, only with the specific set of rules applying to their own species. Even then, many of these rules are similar to those of the human species. This video says it all.

Yes I'm sure cats feel to a certain degree but perhaps not in the same way we think they do.

I've had cats all my life and I've seen many times that when sleeping they will often hug or curl their paws around whatever is lying next to them, be it a ball, blanket or even their own tail if it is curled around.

But perhaps that's nature's way of making sure that when it's her own kitten, she'll give it a mommy hug.

I hadn't seen that video. It's very sweet.

Of course they are!

Last week I had a 72-hour virus. My cat lay on my bed, close to me, the entire time. Only when I got out of bed, feeling better, did she go outdoors for a while.

I agree. And we could stand to model quite a bit of animal behavior.

therefore i chose to be a veggie. whenever i think of eating meat these animal sentiments, mother goat protecting the kid, a hen hiding its chicken, cat holding its kitten and such stuffs flashes into my mind..

if you try harming baby ducks in-front of its mother, the mommy duck will poke you.

and there was this series of pictures somewhere in the net which showed a dead bird on the middle of a busy road, and its mate which wouldn't leave her, which kept on nudging her hoping that the dead bird would fly with him again.

people believe in aliens but they don't want to believe in animal sentiments, or just ignore it for the sake of tummy sentiment!

Video is awesome..and i agree with your post,animals are sentient beings.
Thanks for sharing such an amazing post.
Business Logo Design