I Wish Them Godspeed... 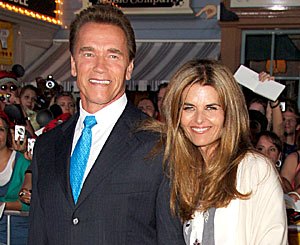 I was really saddened to hear about the separation of Arnold Schwarzenegger and Maria Shriver after 25 years of marriage. And not long ago Bruce Boxleitner and Melissa Gilbert separated at 16 years of marriage. I have never personally experienced a divorce, but I can imagine it must be just about the most painful thing anyone has to endure. A death has a certain closure to it after a period of time and a grieving process, but a divorce is a type of death too, that just never stops. It becomes prolonged and drawn out, with no closure in sight.

Someone once said that it takes a few minutes to get married, and 20 years to become divorced. There is a certain truth to that, especially where there are children involved. Most children love both their parents equally. They don't see their parents through the eyes of the marriage, but through the eyes of a child. So it upsets me when I see children being torn apart by the fracture of their parents' relationship. However, I think it is inevitable in almost every divorce; the children are the ones who lose the most, in ways the parents cannot even imagine.

There rarely is any such thing as an amicable divorce. That's the true definition of an oxymoron -- amicable divorce. People like the Schwarzeneggers and the Boxleitners put on a brave face for the public, but we are all aware of what is really going on behind the scenes. It's heartbreaking, to say the least. The pain must be unimaginable. I feel really sad for anyone who is going through that awful process, and I wish them Godspeed.
Posted by Jo at 8:13 AM

Exactly Jo! You hit the nail square on the head ...the children suffer the most.

My mom and dad divorced 2 years ago after 50 YEARS of marriage. I am 52 years old and each holiday wrenches my heart in two because we can't spend it with both. I'm saddened to hear my mom talk about my dad and what "used to be".

We have graduations coming up and instead of the joy in having a grandchild succeed we have to dwell on how do we handle mom and dad? Which comes to which graduation? If they both come to both do we separate them? What do we do? Indeed, there is no such thing as an amicable divorce.

It was sad news to hear this morning.

Oh I feel so sad for them. They seemed like an ideal couple all this time to me..but ideal is difficult in this real world I guess..Yes Godspeed is what they need so that they can quickly begin the healing process.

Very sad news. I read about this and my heart sank...

I've come to admire them both. It's such sad news, particularly coming so soon after Maria lost her father.

I completely agree with your comments on divorce and the children however, living in LA - this doesn't shock me in the least. I think they were waiting for him to be out of office. He needed her in office. Also, he has the worst reputation as a ladies man so doesn't suprise me in the least. Sorry to be the Debbie Downer.

Personally, I fail to see the point of getting married today. In the USA the average length of a marriage before divorce is 8 years; in the UK is slighty longer at 11-ish years.
So, all these vows about "..'til death us do part ..." is pretty pointless.
I do agree that it hits the children hard and sometimes they tend to think they are to blame.
We were wed in July 1958 and there have been times when each of us has felt like walking away. But, for better or worse, we're still sticking to our vows.

I felt sad, too. Divorce is a tough event even when it's amicable, and the heartache lasts for years. I've been divorced from my first husband for 25 years. We're still friends, and he's friends with my current husband, but any time we get together I relive a bit of the fun and a bit of the pain of the end.

Well, I think that it depends on who initiated the divorce and why. The jilted partner suffers more, along with the children, who are somewhat more resilient after a while. As sad as a divorce is, it's even sadder to stay married to someone who doesn't love you anymore or is in love with someone else, or is abusive in any way.

one wonders why now?

My parents divorced after 36 years of marriage and it broke my heart, I did not speak to my father for nearly 10 years. So I think divorce is always sad.

Divorce is terribly hard on children, but living in a war zone is worse. It's awful when marriages fail, but I do believe that ultimately it's better for the parties to separate and build new, hopefully better, lives. But my heart does break for children, including my own, who have to endure it.